People in the developed and developing worlds manage their money differently. Although they conduct complex financial lives, they do not have bank accounts as money management hubs.

To deal with their low and uneven income streams, poor people, “keep savings at home; join savings clubs and savings-and-loan clubs; transact with family, friends, neighbors, and employers; and, where doing so is feasible and attractive, sign on with formal licensed providers.”[1] They keep track of their finances in their heads, often assisted by what behavioral economists call heuristics, or rules of thumb, such as keeping business and personal money in different pockets, or setting aside a handful of rice every day.

By contrast, most people in developed economies center their economic lives on bank accounts. With apologies, I draw on my own experience.

Even cash transactions are consolidated in the form of ATM withdrawals. As a personal cashflow statement, my bank account is nearly perfect, although for my personal balance sheet, I have to consult a few additional documents, like mortgage, pension, and investment records.

When a person with a low income in the informal sector opens a bank account, the rest of their financial life may not change. It will take a more complex transition for an informal money manager to move to an account-centered financial life.

This observation suggests that we need a better measure of financial inclusion than bank accounts. I have one alternative to suggest.

When the Global Findex was released in April, it marked the first time that financial inclusion statistics from clients were available on a globally consistent basis.[2] The Findex headline was about the number of people with bank accounts: 41 percent of all adults in developing countries and 89 percent in the developed countries. (See chart below).

The Findex data shows that many bank accounts in the developing world are relatively inactive. In high-income countries, the vast majority of account holders (72 percent) use their accounts actively (that is, they make more than two withdrawals per month, a useful definition, though somewhat arbitrary).

Not only do fewer people have bank accounts in low- and middle-income countries, those that have accounts do not use them much. In fact, only 16 to 17 percent of those with accounts use them actively.

Many people appear to use their accounts simply as a way to get paid or receive government benefits. Use of an account for such purposes is a decided improvement over counting out cash – it costs less and is more secure.

I once interviewed a village of coffee in Uganda who traveled most of a day to town where a marketing company clerk handed them their coffee proceeds in envelopes filled with cash. On the way home they were prey to highway robbers.

Later, they were given bank accounts, but the only change was that they now stood in the bank’s withdrawal queue instead of the coffee company’s queue. They still traveled to town, still took their cash home, and were still prey to robbers.

Their financial lives did not change in any significant way. However, they would now show up in national statistics as “banked.” 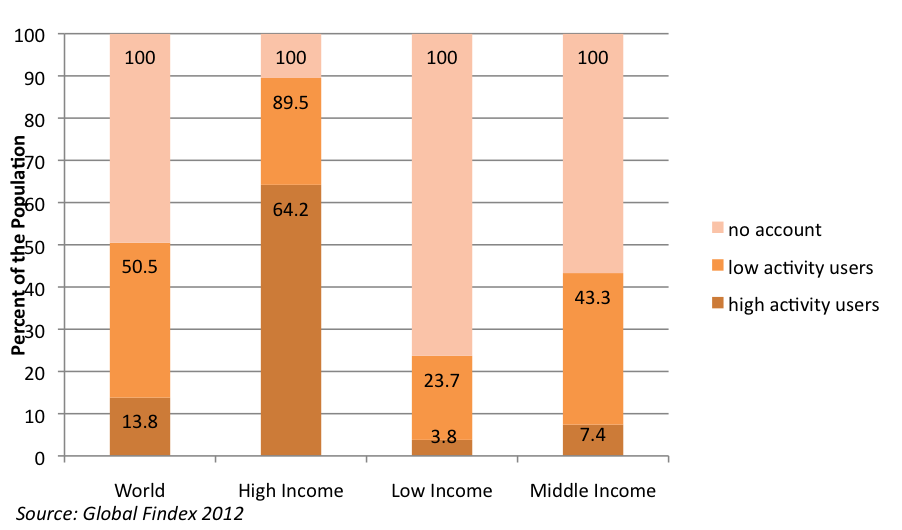 I propose to measure financial inclusion by active use of a bank account. By this count, 64.2 percent of adults in the rich world are financially included.

In the poorest countries, where fewer people have accounts and fewer still use them actively, only 3.8 percent of adults could be counted as included. In middle-income countries the pattern is similar, though the numbers are somewhat higher.

By this measure, financial inclusion has a very long way to go.

Increasing the number of adults with bank accounts is certainly misleading as the top line policy goal for financial inclusion. At the same time, policy makers and product designers must be careful not to assume that everyone wants to change their money management methods to conform to pre-conceived notions of how middle class people in rich countries use their bank accounts.

If we wish to help people use more formal financial products tomorrow, including bank and mobile money accounts, we will have to understand how they manage their money today.