Where Free, Profitable, Impact and Scale Intersect: Insights From the Story of Aravind

Editor’s Note: This is the first in a two-part series focused on Aravind Eye Care System, one of the few stand out success stories of a BoP enterprise profitably serving the poor. Together the posts cover the paradoxes in Aravind’s model, the innovations behind its success, and the insights surfaced in a new book called Infinite Vision, written by Suchitra Shenoy and Pavithra K. Mehta who grew up with the Aravind story.

In 1976 a retired South Indian ophthalmologist by the name of Dr. Govindappa Venkataswamy, or Dr. V as he later came to be called, deeply motivated to serve his local community in Madurai, India, founded an eye clinic with 11 beds. Fast forward 35 years to present day and the organization he founded, known as the Aravind Eye Care System, is internationally renowned and synonymous with what success looks like for a BoP venture. With an ambitious and global mission of eliminating needless blindness, Aravind far outpaces public efforts to deliver eye care in the region, and is currently the world’s largest provider of eye care services, treating over 2.6 million out-patients and performing over 300,000 ophthalmic surgeries annually.

The bulk of surgeries performed are for the extraction of cataracts, a treatable condition that is the cause of 60 percent of blindness in India. Not just a network of hospitals, Aravind is also a hub of innovation for eye care related technologies and ophthalmic products, and is a world recognized leader[1] in training and research in ophthalmology. If all of this emerging from an 11 bed clinic in a sleepy town in South India isn’t impressive enough, consider the following: Aravind is a self-sustaining and profitable organization that treats most of its patients for free or at a deeply subsidized rate. And amazingly, Aravind was a post retirement project for Dr. V, who was 58 when he founded it.

More to This Story Than Meets the Eye

My fascination with the story of Aravind began as a graduate student studying BoP enterprises. In the time I spent with Aravind in Madurai, I observed a well-oiled operation, a veritable sight delivering machine with tentacles reaching far flung villages. Somewhere between the eye camp in rural Tamil Nadu pictured above, and the spotless operating theaters where sight is restored by the thousands, to both the rich and the destitute, my own eyes were opened to what was possible, with and for the poor.

Profitable and free, massive in scale and deeply personal in its approach to serving its patients, if you think there has to be more to this story, you would be right. Thankfully, it’s a story well told, in a new book by Dr. V’s grandniece, Pavithra K. Mehta, who grew up with Aravind, and her collaborator Suchitra Shenoy. Visit the book’s website to learn more about the book, the authors, upcoming launch events and to read an excerpt.

The book, aptly titled “Infinite Vision” is at once a mix of personal stories and insights into the man that put Aravind into motion, as well as a thoughtful and comprehensive account of the strategic decisions, growing pains, innovations and efficiencies behind the successes of Aravind. All told, it is a wealth of insights for BoP practitioners and entrepreneurs. If you are curious how the seemingly impossible goal of cutting costs and increasing quality in health care can be accomplished, if you are wondering whether or how values like compassion can be woven into- or better yet, can drive- a business model…the answers are in this book.

Aravind is the very rare, massively scaled BoP success story. Apart from its success and scale – and likely contributing to these achievements – it is an anomaly in ways that are significant, and almost always paradoxical or contradictory to the experience of most social enterprises. For instance:

Aravind allows all patients to pay what they can, and most pay nothing or deeply subsidized rates 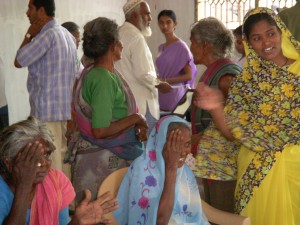 Aravind’s model was designed from the get-go to be successful through catering to volumes. In a business where eliminating needless blindness is pursued with vigorous discipline, volume is key. Rather than focus on marketing to customers, Aravind took the radical approach of marketing to non-customers, activating demand for its products and services, often at a price point of zero. It worked. These massive patient inflows stressed the system, inspired innovation, and forced the driving down of costs in ways that spurred Aravind on to success. (Above: Volunteers and nurses run vision tests for village elders. Image credit: Sadna Samaranayake).

While most clients pay either nothing or deeply subsidized rates, Aravind is the rare not-for-profit organization that runs a surplus through primarily earned revenue. In 2009- 2010 it enjoyed a surplus of USD 13 million, on USD 29 million in revenues. Only 6 percent of its operating budget is grant subsidized. It views fundraising efforts as not worthwhile for core service delivery, but only when in support of supplementary efforts that benefit its broader mission, for instance, training services for other hospitals looking to duplicate their model. 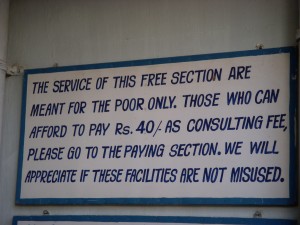 Aravind engages with the poor both as suppliers and consumers

Aravind is also the rare social enterprise that engages with BoP populations as both consumers of its services (poor patients receive primary eye care services all the way through to surgery) and as suppliers (it employs a work force of 3000 strong, many from the same BoP and low income populations it serves). While most BoP business models struggle mightily with one side of the equation, Aravind has engineered a system wherein the poor are seamlessly integrated and integral on both the demand and supply sides.

What is the formula?

How did Aravind’s success transpire? What is the magic in this model? And given such a clear and compelling example of success, why hasn’t the model been widely replicated? The answers to these questions are compellingly laid out in Infinite Vision. Part two of this post will discuss the multifaceted and interdependent nature of innovations in Aravind’s model, and the culture of service that gave rise to the organization’s success.

[1] Among other accolades, Aravind is a winner of the 2008 Gates Award for Global Health, The António Champalimaud Vision Award in 2007, and the Conrad Hilton Humanitarian Prize in 2010.