ViewChange Film Friday: ’With My Own Two Wheels’

NextBillion is partnering with ViewChange, a multimedia organization managed by LinkTV and founded with support by the Gates Foundation, to share documentary features and other stories of entrepreneurship and development against the odds with the NextBillion community. The following post is by Jacob Seigel-Boettner, the director of the film With My Own Two Wheels. The film is embedded below and will premiere at 8 p.m. EST/5 p.m. PST today on Link TV.

Imagine if you had to walk 2-3 hours to get to school.

Imagine if your doctor had to walk 15-20 kilometers to visit one of your sick family members on a house call.

Imagine if the farmer who grew your produce could not work in his or her fields after 9 AM because of air pollution.

Now imagine the number of bicycles collecting dust in garages across the United States. Imagine how the bicycle – a simple machine that we often take for granted – could make an impact in the lives of the not-so-hypothetical individuals described above.

For most Americans, the bicycle is a choice. It is a toy, a recreational tool, or an eco-conscious form of transportation. Many of us may choose to use the bicycle for very good and ethical reasons: to stay fit or cut down on our carbon footprint. That said, there are few of us who can’t hop in the car if it starts to rain.

In 2010, three childhood mountain biking buddies from Santa Barbara, California set off on a round-the-world journey to film the stories of individuals for whom the bicycle is not a choice. Isaac, Ian, and I were looking for stories of individuals who – when equipped with a bicycle – could not only overcome these personal challenges, but also fundamentally alter their own communities for the better.

A year later, With My Own Two Wheels was born. While we knew that the bicycle could have a huge impact in both the developing world an our own communities, we didn’t truly understand the power of two wheels until we met the five characters whose stories we had the privilege of capturing on film.

For Fred, a health worker in Zambia, a bicycle from World Bicycle Relief is a means to provide care for more patients. It also allows Fred to be a friendly face for a larger handful of the more than 1.1 million Zambians living with HIV/AIDS…many of who have been shunned by their families.

For Mirriam, a disabled woman in Ghana, the opportunity to work at Ability Bikes – a shop run entirely by disabled Ghanaians – means both employment and the chance to buck the stigma attached to disabled people in Ghana. As a master wheelbuilder, Mirriam is now the one providing ability and mobility to the supposedly “able” population in Ghana.

For Bharati, a student in India, the bike from Ashta No Kai is a means to get to high school – an opportunity that was not available for women in her mother’s generation. It is also a chance to dream big. Bharati wants to be a district supervisor and in her words, “eradicate poverty from this country.”

For Carlos, a farmer in Guatemala, pedal power is key to reducing the pollution that prevents him from working in his fields during the day. Through his NGO Maya Pedal, he has devised over 40 bicimaquinas: pedal-powered devices such as water pumps and corn grinders that help cut down on rural farmers’ use of and reliance on fossil fuels.

For Sharkey, a former gang member in Santa Barbara, CA, the bicycle is a way out. Instead of hanging on the street corner with his homies, Sharkey can now be found most days teaching Santa Barbarians of all walks of life how to work on their bicycles at Bici Centro, a community bike shop.

For all of these individuals, the bike is not a choice. It is not a right. As we learned while filming With My Own Two Wheels, the bicycle can not only change a single life … it can alter an entire community. In the words of Carlos: “The máquina speaks for itself.”

About Jacob Seigel-Boettner: Jacob’s passion for two wheels is equaled by his passion for storytelling and social justice. While earning his BA in Peace and Conflict Studies at UC Berkeley, Jacob produced short films in Rwanda and Bosnia- Herzegovina that dealt with issues of sustainable development and national identity politics. With My Own Two Wheels is the senior thesis that he never got a chance to “write.” 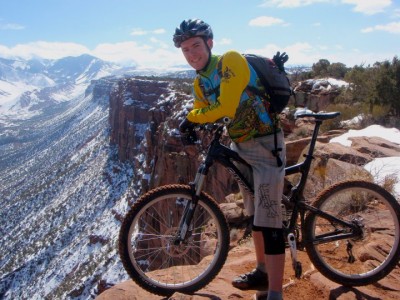