Each week the New York Stock Exchange invites a different group to ring the opening and closing bells to start and stop the day’s trading.

In the world of high finance, this is a bit of a perfunctory exercise. The bell ringers usually consist of executives from companies that are celebrating an anniversary (such as 50 years of trading on the exchange), a dignitary or notable celebrity of some kind, or perhaps a trade group that’s celebrating a milestone.

But on Monday, a new group did the honors: representatives from the U.S. National Advisory Board (NAB) to the Social Impact Investment Task Force. The task force was launched at the United Kingdom’s G8 Social Impact Investment Forum in June 2013. Its mission is to raise awareness about the role of public and private innovation and entrepreneurship in solving the world’s greatest social challenges.

The group is developing an impact investing policy agenda in the United States and is slated to issue its first report in June. The NAB is comprised of 27 thought leaders including private investors, entrepreneurs, foundations, academics, think tanks, impact enterprises, nonprofits, coalitions and intermediaries. (See below).

While the bell ringing is purely symbolic, the symbol is important nonetheless: Impact investing has moved from the fringe to the mainstream – or at least mainstream recognition.

The NAB group, many of whom helped close trading on Monday, includes: 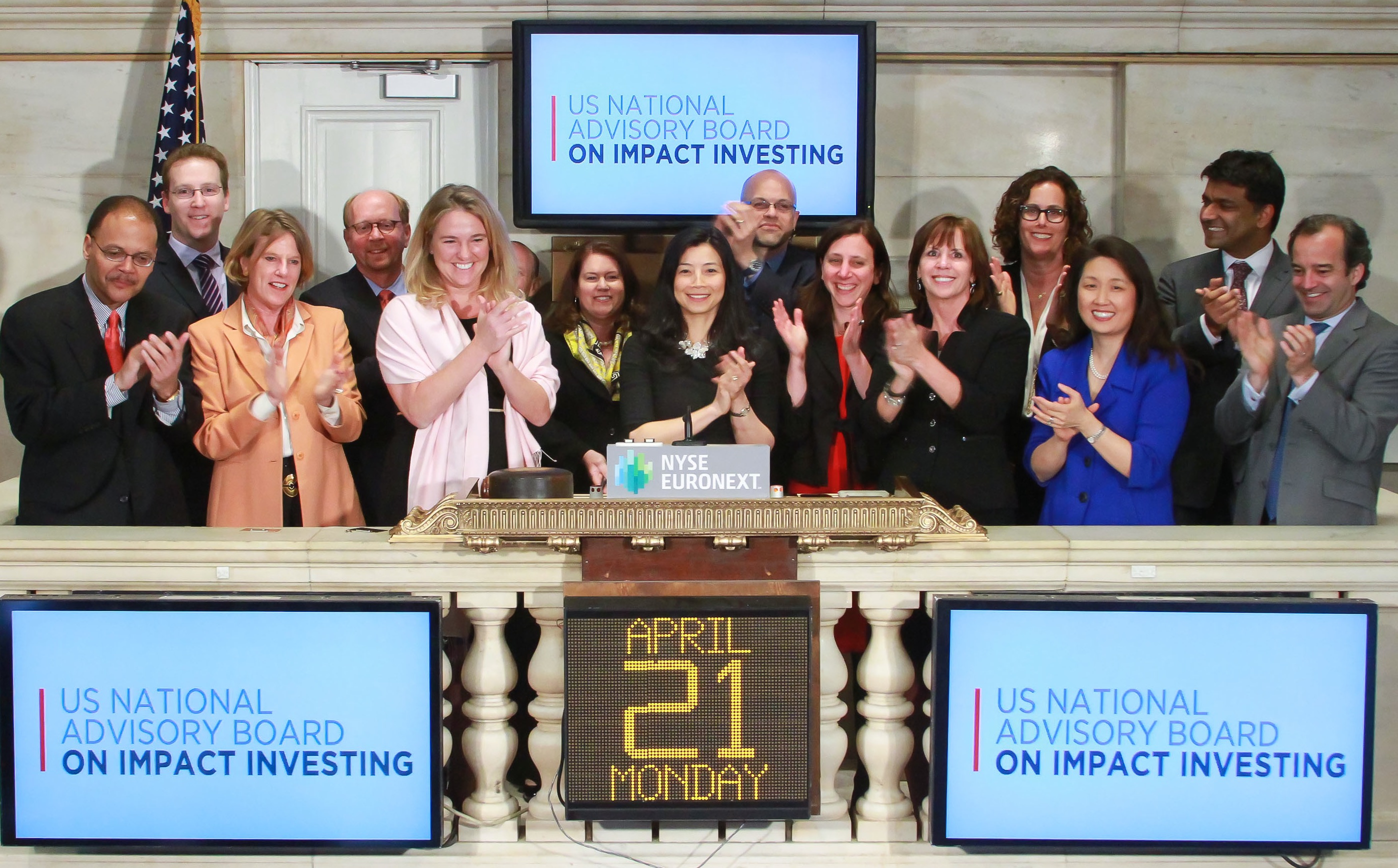 Related to this development comes a random but nonetheless interesting quote, from Steve Case in this interview with Inc. Case is currently best known for launching AOL, but in the longer term he may also be known for his efforts in boosting entrepreneurship. He expressed his enthusiasm for both B Corps and the long-term future of what we care about on NB:

“I’m a fan of B Corps. I think a growing generation of entrepreneurs and investors want to think out of the box, and rather than just be focused on profit [or purpose] they’ll want to pursue hybrid models,” Case said. “We believe impact investing is at a tipping point…. Just as we saw startups and venture capital develop over the past fifty years, we think we’ll see social enterprises and impact investing develop over the next fifty years.”

What Rana Plaza Left Behind 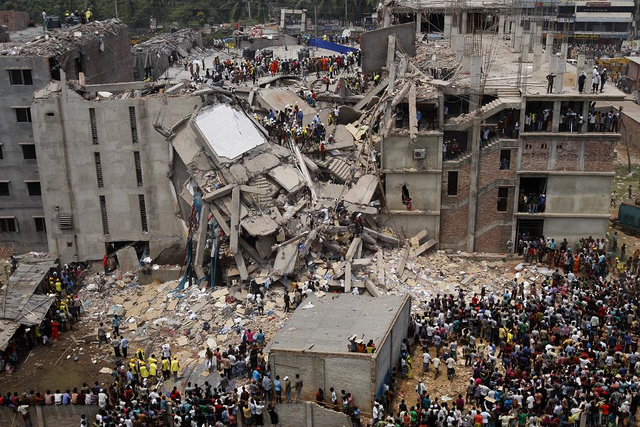 There were many remembrances this week of the 1,135 workers who perished in the Rana Plaza disaster in Bangladesh one year ago, leaving loved ones to pick up the pieces – both emotional and economic. One of the more heart-wrenching stories involved a young woman named Rekha Khatun, whose body was never recovered from the collapse. Her family’s story is eloquently told by Rakib Mohammad Avi on the BRAC blog:

“Rekha had plans to pull the family out of poverty and set up a small business for her father in the village so that they could all move back and her little brothers and sisters would have a better, comfortable life. The only times she used to get angry was when her parents talked about her marriage. ‘Not so soon,’ she used to say, ‘I am working for a better future for my brothers and sisters, I need time.’ “

Like Rekha, many of those lost in the garment factory were the breadwinners for their families. And adding insult to injury, according to Human Rights Watch (HRW), many of the multinational companies that sourced from the factory are not paying into the victims relief fund. According to the Associated Press:

“The target for the fund, chaired by the International Labor Organization, is $40 million, but only $15 million has been raised so far, HRW said. Retailers Bonmarche, El Corte Ingles, Loblaw and Primark have all pledged money.”

Some 160 companies in 20 countries have joined the Accord for Fire and Building Safety, which has a goal of inspecting 1,500 factories between now and September, according to the Interfaith Center on Corporate Responsibility. And, in the Bangladeshi capital of Dhaka, several factories have been deemed structurally unsound and shut down, noted Sarah Krasley, senior sustainable manufacturing program lead at Autodesk, who calls for standardizing worker safety protocols.

“I am encouraged by how much the horror of last April 24 stayed in the news this past year. But the work will not be complete until we turn better conditions and agreed-upon standards and metrics into widespread realities. Only by doing so can we ethically and accurately tell the stories of the products we consume and improve the lives of the people who make them.”

As Krasley alluded to, if there’s a positive to take away from the Rana Plaza tragedy, it’s the move toward greater awareness – and hopefully, greater transparency – in international supply chains. Efforts like FairWear, which aims to improve working conditions for garment workers by providing fairly produced, ethically sourced clothing, are a start. But FairWear is akin to a single thread in the sprawling tapestry that is the global fashion industry – and the garment and apparel industry is just one of many that depend on BoP labor markets. Until more companies and industries join the movement toward ethical supply chains, conditions are unlikely to improve. And companies aren’t likely to change until consumers demand it. It has become a cliche to talk about the interconnectedness of today’s world. But as long as consumer appetite remains high for products that were unethically sourced, workers at the BoP will reap what we sow.

NexThought Monday: Who will grab the fortune at the base of the pyramid? By Paul Polak and Mal Warwick

’Maybe It’s Time We Start Behaving Like a Business’: The struggle of one microfinance institution to balance its social impact with its bottom line By Kelsey Whitman

Watch the Replay of our Latest Google Hangout: ANDE’s Randall Kempner on what’s ahead for SGBs By Scott Anderson — WDI

Comply or Explain: Corporate India takes on a new model of CSR By Nilima Achwal

New Ventures Ditch the Product Invention Lab, Target Distribution Instead: The 12 D-Prize Competition winners are all about sharing proven tech, innovations – not inventing them By Nicholas Fusso

Impact Investing at a Crossroads: Sustainatopia Impact Conference highlights excitement and concerns about the future of the sector By James Militzer — WDI

Roadmap to Defeating Childhood Diseases: The infrastructure that helped India whip polio could be used to immunize against other preventable killers By Dr. Geeta Sodhi
Why Chevron is in the Business of Stopping HIV: Each year mother-to-child transmission of HIV affects 70,000 babies in Nigeria By Kyle Poplin — WDI