Globally, women and girls are responsible for three-quarters of unpaid care work. This is due to the belief — still commonly held in many cultures — that a woman’s role in society is to take care of the home, requiring her to take on the majority of household and childcare duties. This social norm is so strong in some contexts that, if broken, it can lead to disagreements in the home — or even negatively impact the reputation of men if they accept more of these responsibilities.

This problem is even greater in low-income markets — and its economic impact is substantial. To take a few examples, if women participated in the economy to the same extent as men, gross domestic product could grow by $721 billion in sub-Saharan Africa, $2.6 trillion in Latin America, and $2.9 trillion in India by 2025.

Behind these statistics are a vast number of women entrepreneurs in emerging markets around the world, who struggle to build thriving businesses due to the demands of their unpaid care work at home. But while much has been written about the ways in which household dynamics impact how women entrepreneurs can operate and grow their businesses, there’s limited evidence of practical approaches that can influence these dynamics.

To address this knowledge gap, Bopinc experimented with a unique approach to changing social norms around housework, through our Bright Innovations program. Working in partnership with Unilever, we tested a way to promote the sharing of household chores between women entrepreneurs and their husbands. Unilever has recruited and trained women to serve as “Shakti” entrepreneurs who sell its products in rural communities across Nigeria. Operating from small retail shops in their homes or open markets, Shakti women sell Lifebuoy soap, Sunlight washing powder and Knorr iron-fortified bouillon cubes, among other Unilever brands. Like other women, these entrepreneurs juggle their work alongside their cooking, childcare and cleaning responsibilities at home, limiting the time available to pursue their entrepreneurial ambitions and increase their economic contributions. We experimented with an innovative way to support these women, using radio to influence the social norms around household chores that were preventing them from growing their Shakti businesses.

This approach was inspired by UNICEF’s practical guide to tackling social norms and ODI’s research on changing gender norms in unpaid care and domestic work, and we designed it around three key elements, which we’ll discuss below. We hope that the results and lessons learned can be used and built upon by other organisations supporting women entrepreneurs.

We knew that beliefs and social expectations around gender norms could only effectively change through interactions. And we recognised that these interactions should be held between the individuals we were trying to reach: in our case, Shakti entrepreneurs and the people who influence their beliefs and social expectations — e.g., husbands and mothers-in-law, to name a few.

We leveraged mass media to foster interactions among these individuals around the topic of sharing chores, engaging a popular radio show and anchor known for discussing topics related to relationships and marriage. Together with a few Shakti entrepreneurs, their husbands and mothers-in-law, we worked with the anchor to co-create six weekly radio shows with a talk show format, which aired as segments in the regular radio program and were broadcast to its entire listener base. We knew this programming would catch the attention of the larger Shakti community, and we monitored and evaluated the impact it had on listeners from Shakti households. The shows explored the following subjects, each of them representing unique angles for couples to consider when sharing chores:

Recognising that role models are necessary for a larger group to consider new ways, we recruited relatable role models who supported the sharing of chores, and who demonstrated the confidence, leadership and honesty necessary to be guests on a radio show. These included Shakti entrepreneurs, their husbands and a mother-in-law. The radio anchor opened the show with a story or trend related to the topic — for example, talking about a man whose wife has to go to work very early, and who stays home, taking care of the children, cooking and doing other household chores instead of leaving them to his wife. She then moderated a discussion with the guests by asking leading questions to stimulate the sharing of personal stories and opinions, such as: “As a successful businesswoman, what’s your advice to women who have the ambition to work outside the home?” or “These days, we see men being more involved in childcare and household chores. Do you think it emasculates the man? Why or why not?” (To reduce the likelihood of unproductive responses, we pre-selected the couples, and also did pre-interviews with them to select stories that were engaging and on-topic — and to make sure that none of them were against sharing chores.) The anchor ended the shows by repeating the key take-home messages from the guests.

Leveraging values is a strong and inspiring way to promote the acceptance of new practices, especially if the new practices help people to better embody those values. In our radio shows, Shakti entrepreneurs shared that by helping with chores, husbands are serving as positive role models for children, strengthening the bond between the couple, and giving their wives more time to run their businesses. They also emphasised that husbands should assist with some chores when they see a need, but don’t necessarily have to take over the responsibility entirely from their wives.

This messaging leveraged existing values related to building a strong and supportive family. As one Shakti entrepreneur put it during one of these on-air conversations: “I asked my eldest daughter if she’d like to marry a man like her father. She said ‘yes’ and told me all the qualities she sees in her father. She said she likes the way he helps me and that she would love to settle down with someone like her father.”

Sometimes people act certain ways because they think others support it — or because they think others don’t support the alternative. If in reality this is not (always) true, it is helpful to correct this misperception. While preparing the radio shows, we learned that the role models we’d recruited do not believe that chores emasculate men. So, in our shows, many of our guests spoke out about this misperception. As one Shakti entrepreneur put it, “When the husband helps the wife it doesn’t make him a puppet, it shows there’s understanding between them.”

However, since the sharing of chores is often a private matter, couples’ perceptions of this division of labor may differ. During the shows, we let couples bring up their own examples of how chores were shared, the reasons for doing so (e.g., “We are helpmates to each other”), how they make it work (e.g., “Be appreciative of each other’s help”), and how sharing chores has benefited them (e.g., more time for her to run the business).

What did we learn?

To encourage interactions on the topic, we focused on the city of Ibadan, a community where there was evidence of change and openness with regards to gender norms. We invited all Shakti entrepreneurs working in and around the city — along with their close family members and friends — to listen to the six weekly shows together, and we reminded them via SMS and provided a monetary incentive to thank them for their time. We evaluated the radio shows through a pre-post survey with Shakti entrepreneurs, capturing their beliefs, discussions sparked with partners on sharing chores, uptake of new practices, takeaways, and interactions with others. We also observed and interviewed a sample of Shakti entrepreneurs during the radio shows, to understand the shows’ appeal and relevance to this audience. Through these measures, we generated the following key insights.

The shows increased interaction on the distribution of chores: 52% of survey respondents discussed the content with someone else, primarily their husbands, but also with their children, mothers-in-law and friends/neighbours.

The shows seemed effective in reducing perceived social sanctions: After listening to the radio shows, fewer Shakti entrepreneurs agreed that wives should feel ashamed if their husband cooks or cleans, compared with the pre-survey. Radio conversations about gender stereotypes and the Shakti business seemed to have helped here (see Table 1a and 1b below). Listeners shared takeaways such as “No job or house chore is gender specific, we as a couple need to learn how to balance things,” and “Helping your wife in the kitchen does not make you less of a man.” 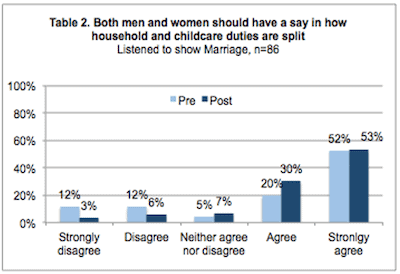 While this intervention was limited in scope, it provides emerging evidence to suggest that radio shows led by and featuring community members could contribute to weakening the social norms that hold women entrepreneurs back, helping them to initiate change at home.

Based on these findings, we see opportunities to further engage men through small and easy actions, such as making husbands aware of how much help they should render to reduce women’s time burden. We also see potential value in incorporating additional channels to share these messages, such as through an (onboarding) training module, in which couples run through a business exercise together to decide how much time is needed for her to run the business, how much their household gains financially from her work – and what this means for running the home.

As a partner to the private sector in developing inclusive businesses, Bopinc is on a journey to build business models that challenge gender norms with companies and brands. Are you on a similar mission? If so, we invite you to get in touch so we can learn together.

Trisha Clauson is a Senior Program Manager at Bopinc, and Annegien Langedijk-Wilms is an independent behavioral design consultant at Growing Initiatives.