Is Africa ‘Rising’ or ‘Falling’? : The question is not which narrative is true, but which will win?

The question is not which narrative is true, but which will win?

Is Africa rising or falling? Over the last 50 years, the answer to this question has been debated and examined from every angle. Even today there exist vastly different views on what Africa’s future holds. At the heart of this discussion are more than 1 billion men, women, and children living within 54 nations that form the world’s most vibrant continent.

In recent years, conversations about African prosperity have become increasingly optimistic. And this optimism is supported by evidence.

Data collected in recent years reveal that Africa has much to celebrate: high growth rates, declining poverty, improvements in health, a reduction in conflict, and an increase in the number of democracies (of various shades). All of these point towards a continent on the up. This sentiment was powerfully expressed in two simple yet powerful words on the December 2011 front cover of The Economist magazine: Africa Rising.

This optimism, however, co-exists with a competing narrative that is more pessimistic about Africa’s future. This narrative suggests recent growth cannot be sustained, that necessary economic reforms have not been undertaken to protect the continent from a future downturn, and that political instability, violence, and corruption remain too common across much of the continent. It posits that until and unless these obstacles are removed, African nations will not be able to reach their full potential.

The question is not which of these narratives is true, it is which will win. The 2013 report Insight on Africa from the Legatum Institute highlighted Nigeria as a case study to explore this struggle:

“Where violence continues to fuel instability, economic growth cannot advance unabated. Despite being a rising economic success story, Nigeria’s future prosperity is in jeopardy from serious challenges to safety and security… In this respect, Nigeria embodies a struggle that characterises many African nations. Securing a more prosperous future rests on which of these narratives wins out.” 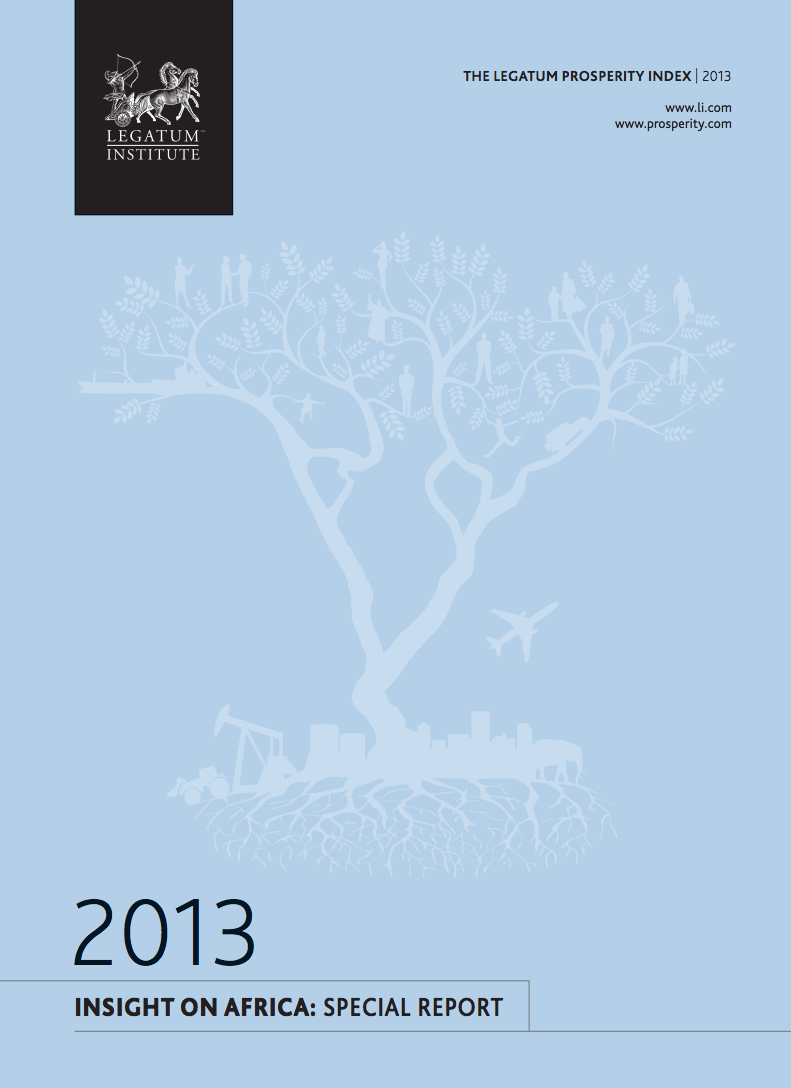 Another commonly cited challenge facing the continent is corruption. In the past few years, Africa has been thriving as a continent known for its business opportunities and is being increasingly seen by investors as the continent with the highest future growth potential. And African citizens are optimistic too: a recent survey revealed that three-quarters of the African population think that their country provides a good environment for entrepreneurs.

However, despite the hopes of donors and anti-corruption campaigners, there has been no noticeable change in corruption levels in the past five years across Africa. This is despite an increase in democracy levels and an improvement in many governance-related indicators in the continent.

In fact, the countries that have the highest levels of perceived corruption — e.g. Kenya, South Africa and Namibia — are democratic countries, scoring highly on governance indicators. This suggests that there are factors other than institutional weakness fuelling corruption.

Another important part of the African prosperity story is the influence of Asian investment. Zambia provides an interesting case study in this area. An Afrobarometer survey conducted in 2009 revealed that three-quarters of the Zambian population believed that China has helped Zambia “a lot” or “somewhat.”

While China is the largest investor in Africa, it is important to recognise that it is not alone. Japan, for example, although much less significant in terms of overall trade flows, has embassies in 32 African countries and more than 300 companies operating across the continent in a variety of sectors. Other important investors in Africa include South Korea, which through its chaebol conglomerates (principally Samsung), is reportedly looking to increase its regional investment to $10 billion by 2015.

Asian investment has proven attractive to some African governments as an important counterweight to Western firms, whose investments are often conditional on the absence of political or reputational risk within the specific country.

No discussion about Africa’s future is complete without considering the effect of demographic change and the so-called “youth bulge”. Today, the total population of Africa is thought to have broken the 1 billion mark (and is projected to grow at a rate of 3 percent per year). Moreover, in countries such as Ethiopia, Kenya, Liberia, Nigeria, and Uganda, more than 70 percent of the population are under 30. This presents both an opportunity and a threat, as outlined in the Legatum report:

“These rapidly changing demographics present significant economic opportunities as well as serious political challenges. The result is that “two Africas” may evolve over the coming years: one which is able to cope with the influx of young workers into its economy, and one which is not.”

Within this debate between the optimists and pessimists, it can be challenging to disentangle opinions from objective facts. Reports such as Legatum’s Insight on Africa and conferences such as the Sankalp Africa Summit attempt to provide the data, context, and insight required to understand both the challenges and opportunities facing the world’s most dynamic continent.

The discussion around these themes (and more) will be continued at the Sankalp Africa Summit, including the panel on “Driving Prosperity in Africa on Feb. 13.

I hope to see you there!

Nathan Gamester is the programme director for the Legatum Prosperity Index. The Legatum Institute is an independent public policy organisation that promotes free and prosperous societies around the world.