An Update on the Idjwi Project

Since this summer, when I first wrote about Dr. Jacques Sebisaho and his team as they prepared to travel to Idjwi with the mission of filling the Island’s healthcare void, the facts on the island remain unchanged. There are still upwards of 200,000 vulnerable people living on the island, only three of whom are doctors; there are still low instances of electricity and potable water, and high child mortality rates. But, what is different, is the island’s outlook.

In a recent interview, Dr. Sebisaho articulated three goals that Amani Global Works hoped to accomplish during the team’s three-month trip to Idjwi. First and foremost, Dr. Sebisaho wanted to get the Idjwi community behind the organization’s plan to erect a main hospital and satellite health clinics. After all, if the community rejects the unfamiliar availability of healthcare, after laying the future hospital foundation and stocking its shelves with supplies, its halls would remain empty, vaccinations would remain unused, and all efforts would be rendered futile. As Dr. Sebisaho puts it, the organization’s success is contingent on confirming that Amani is “not going against the flow.” Secondly, Amani hoped to mollify any potential racial or political tensions that could result in an isolated island’s sudden exposure to technology, never before seen races and unfamiliar practices. A third and crucial goal was to return to New York with a concrete plan the citizens of Idjwi will embrace and that Amani can support.

So how did the Amani team’s accomplishments measure up to their goals?

Of course, there were many impediments along the way. The difficulty associated with a lack of communication technology on the Island is only topped by the frustration of having no roads and efficient travel means (not to mention limited or no electricity). Until a few weeks ago, when Dr. Sebisaho’s team charted a map of the Island, one had never existed. When faced with an illness, someone from Idjwi has to wait one week to board a boat to a neighboring village to receive medical attention- a scenario that certainly does not favorably lend itself to emergencies. The team’s plan to accrue feedback from surveys and town hall meetings were inherently complicated by the lack of communication, but their glowing results hardly reflected the difficulties. 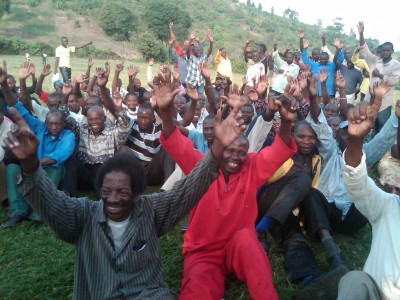 (Above: Hand-raisers meet where the hospital will be constructed).

The Amani team composed of Harvard students traveled throughout the island from door to door, and collected surveys from more than 3,000 people conveying their wants, needs and preferences. Furthermore, the students were able to employ women on the island to aid in conducting the surveys and collecting the coveted data. Even some children, previously tangled in the army as child soldiers, participated in the discussions and voiced their dreams for Idjwi. Close to 1,000 inhabitants of Idjwi attended the two town hall meetings that took place in both the North and South regions of the island over the course of the team’s three-week visit, and engaged in open discussions about what the people of the Island need most. (Dr. Sebisaho expected a turnout of 20 people, based on previous apathy and discouragement that he detected among the people.) In one group interview, five village children conveyed to Dr. Sebisaho that they “had lost faith in people;” they felt like no authority would provide for them or fill their basic needs, and “for the first time they were finally seeing someone do something positive for the island without a political agenda.” And after reading through the thousands of surveys collected, it is clear to Dr. Sebisaho that this sentiment is a pandemic throughout the island, perhaps as widespread as malnourishment and malaria.

After garnering the support of the community, the Amani team tackled its other goals. During one of the door-to-door meetings in Northern Idjwi, Dr. Sebisaho’s team found five young high school graduates (a rare finding on the island, since many move away to seek more education or jobs) who were eager to lend a hand. Without the help of any machines, these students traced a road linking the community of Northern Idjwi to the future hospital. People now use the road to travel to places where only motorcycles dared to roam previously; thanks to these five students, their elementary tools, and Amani Globa Works’ guidance, the community realized that Dr. Sebisaho is not only there to merely preach and make promises. Needless to say, his current promises to raise funds and begin building, have raised high expectations. 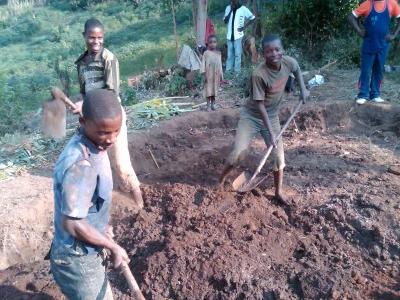 (Above: Community volunteers making bricks that will be used to build the medical center, as a sign of their willingness to participate).

Although the medical statistics of Idjwi have not yet changed, one man and a handful of students have won over the hearts of the people and have started to make their mark. You can see this in their newly traced roads, freshly charted maps, and pages upon pages of data that will continue to guide the Amani team closer to solutions for a community with many basic problems.

If they can accomplish all of that in just three weeks, I look forward to seeing what will unfold in the coming months.