On the Upswing: ANDE’s 2011 Impact Report

Considering it’s very wide net approach, I suspect we’ll be delving much more deeply into the just released 2011 Impact Report by the Aspen Network of Development Entrepreneurs in the coming days. But with the formal launch of the report, which is taking place today at the Citi Foundation in New York City, I wanted to tease out just a few of the details.

By the way, it’s ANDE’s third impact report and takes the pulse of many of the organization’s now 143 members (ANDE added of 54 new members for the year) on the breadth and depth of small and growing business (SGB) development. ANDE members range from investors to foundations to NGOs and public/private partnerships. They de?ne SGBs businesses with 5 to 250 employees and with a strong potential for growth, which generally are seeking growth capital in the range of $20,000 to $2 million.

The report finds 35 funds launched in 2011 that include SGBs as target investments. Here are a couple of other highlights, which in the interest of time, I’m pulling directly from ANDE’s press release (italics added): 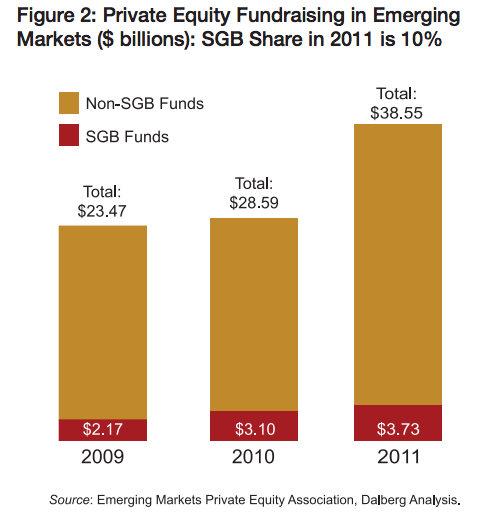 SGB-focused fundraising reached $20 billion over the past decade:

Although this number is significantly less than both microfinance and private equity fundraising, the space is gaining momentum. The research demonstrates strong growth: over the past three years, fundraising targets for funds focused on SGBs increased by 71 percent, reaching $3.73 billion in 2011. During this same time, 102 SGB funds completed fundraising efforts and began making investments.

In 2011, they made sizable investments in supporting start-ups and small businesses: 37 members invested $750 million across 1,075 investments. $112.6 million was provided for capacity development—or business development—activities.

ANDE members also report that in 2011, the SGB-focused fundraising targets constituted 10 percent of the total targets for emerging market private equity funds, as noted in Figure 2. Although the number of funds actually fell in number between 2010 and 2011, the report says their average target size increased 30 percent. The implication, according to ANDE, is that fund managers are building capacity for increased investment.

To download the 2011 Impact Report and Executive Summary (also available in Spanish, French and Portuguese), go to: http://www.aspeninstitute.org/ande.