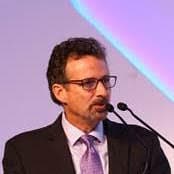 Larry Reed is the founder of Soul of Finance, a blog of stories and reflections on how finance can be used as a tool of liberation.

He is the U.S. Director for Poverty Stoplight, a system for measuring and motivating human thriving.  He has worked for more than 35 years in designing, supporting and leading activities and organizations that empower poor people to transform their lives and their communities.  This has included serving as the Director of the Microcredit Summit Campaign and as the CEO of the Opportunity International Network.

Larry authored the State of the Microcredit Summit Campaign Report from 2011 to 2015 and has contributed to several books on finance and the poor including The New World of Microfinance (Rhyne, Otero, et. al., 1996), Serving with the Poor in Africa (Yamamori, Myers,  Bediako and Reed, 1996), Globalization and the Kingdom of God (Goudzwaard, 2001), and More Pathways Out of Poverty (Harris et. al., 2006).

He is a graduate of Wheaton College and the John F. Kennedy School of Government at Harvard University.