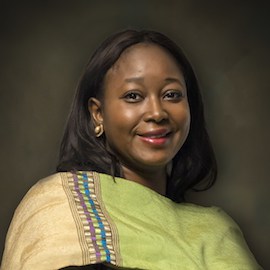 Oumou Camara, IFDC deputy director for North and West Africa, has more than 20 years of experience in agricultural economics. Joining IFDC in 2005, Camara was instrumental in coordinating the 2006 Africa Fertilizer Summit, which brought together heads of state, agriculture ministers, corporate and nonprofit leaders, and scientists to address soil fertility and food security in Africa.

Camara also has served as IFDC senior portfolio manager for West Africa, senior economist seconded to the African Union Commission and country representative in Ethiopia. Prior to joining IFDC, Camara was a member of the United Nations Economic Commission for Africa (UNECA) Young African Professionals Program. She served as an agro-economist for the International Crops Research Institute for the Semi-Arid Tropics (ICRISAT) and the International Livestock Research Institute (ILRI) based in Niger. She also held research assistant roles at Washington State University, Virginia Tech and Michigan State University.