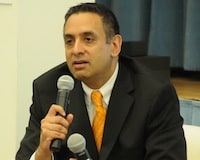 Rahul Desai
Opportunities for the Majority

Rahul Desaicoordinates the operations of Opportunities for the Majority, an innovative impact investment unit developed at the IDB to support inclusive businesses targeting lower income communities as consumers, producers, owners or employees. Desai has two decades of experience working in Latin America in two principal areas – development finance and private equity investment. He has worked at all the private sector windows of the Inter-American Development Bank, where he gained significant experience in SME lending, structured finance, and setting up and investing in private equity funds. Desai worked for four years at the AIG-GE Capital Latin American Infrastructure Fund, where he headed investment teams that made private equity investments in five companies, four in the telecom sector and one in transportation. Desai earned an MBA from Harvard Business School and an A.B from Harvard College in Economics and Geological Sciences. He is fluent in English, Spanish, and Portuguese and has a working knowledge of French and Hindi. A firm believer in the power of education to transform society, he is currently supporting the high school or college education of low-income students in Mexico, Colombia and Peru.