Big Data = Better Global Health?: What impact will the Global Burden of Disease study have?

Bill Gates, Margaret Chan, the Director General of the World Health Organization (WHO), and other experts and leaders gathered last month in Geneva for a very important meeting on a very unimportant-sounding subject: global disease estimates.

The impetus was the release of the Global Burden of Disease (GBD) Study, the most comprehensive and ambitious effort to date to quantify the world’s health status. Led by Chris Murray and his colleagues at the Institute for Health Metrics and Evaluation (IHME) and funded by the Bill & Melinda Gates Foundation, the GBD study involved 486 collaborators from 302 institutions in 50 countries. In a field in which donors and policymakers have lacked basic health data, such as birth and death registries, for many countries, the GBD study assesses 291 diseases and injuries and 67 risk factors in 187 countries over a 20-year period (1990-2010).

The British medical journal, The Lancet, devoted an entire triple-length issue to the study and compared it to the Human Genome Project, the international initiative that mapped man’s genetic code. Other health experts criticized the GBD study as nontransparent in its methodology and lacking the accountability of WHO-generated data.

The recent meeting in Geneva produced consensus on principles for generating future global health estimates, but left the more fundamental question—the use of these estimates–unaddressed. Evidence-based global health policymaking is impossible without better data, but it is far from clear that such policymaking will now occur with better data either.

Indeed, the GBD study is unlikely to dramatically alter donor policies or mobilize significant new foreign aid. The more likely and better use of the study and its future iterations are as evidence and sources of accountability for national governments in addressing the needs of their citizens. As such, the legacy of the study may be helping to usher in the emerging era of global health, in which donor aid matters less and improved governance, efficiency, and better collaboration among trade, regulatory, and technical agencies matter more.

The Global Burden of Disease

The findings of the study are important, but in many respects, not new. WHO published two previous GBD studies, also led by Murray, in 1996 and 2004. Like the most recent Study, those reports showed that cancers, diabetes, cardiovascular disease, and respiratory illnesses – noncommunicable diseases (NCDs) — would far surpass the burden of infectious diseases and maternal and child mortality in developing countries and pose severe challenges to their health care systems. Other studies have also confirmed those conclusions.

The chief contributions of the latest study are its analytical rigor, scope, and demonstration of the shocking speed with which epidemiological and demographic transitions are occurring globally. Life expectancies are rising in most developing countries. The dominant health risks globally are now behavioral–such as tobacco use, high blood pressure, and household air pollution. These increases in longevity and exposure to behavioral risks are outpacing the improvement of developing country governments’ health and regulatory systems. As a result, more people are falling susceptible to NCDs faster and suffering more chronic disability than expected. NCDs are now responsible for more than 70 percent of the death and disability that occurs in many parts of Latin America, the Middle East and Asia.

(Above: Percent of disability-adjusted life years lost to NCDs in 2010. Source: IHME)

Previous GBD studies helped catalyze important policy initiatives to address the changing health needs of developing countries. In 2002, WHO concluded an international treaty on tobacco control, to which 175 countries are now parties. In 2011, the United Nations General Assembly devoted a high-level meeting to NCDs, the first such meeting on a health topic other than HIV/AIDS.

Yet previous GBD studies have not dramatically altered the distribution of donor resources. The U.S. government is the largest provider of global health aid, but little of that funding goes to NCDs. Past GBD studies have shown tobacco use annually kills more people worldwide than HIV/AIDS, tuberculosis, and malaria combined, but the U.S. government spent only $7 million of its $8.4 billion global health budget in 2010 on international tobacco control. WHO spending on NCDs and their risk factors increased since the 1996 GBD study, but still represents only 6 percent of the WHO budget and may be decreasing. NCD-related aid from the World Bank and regional development banks has declined since 1996. 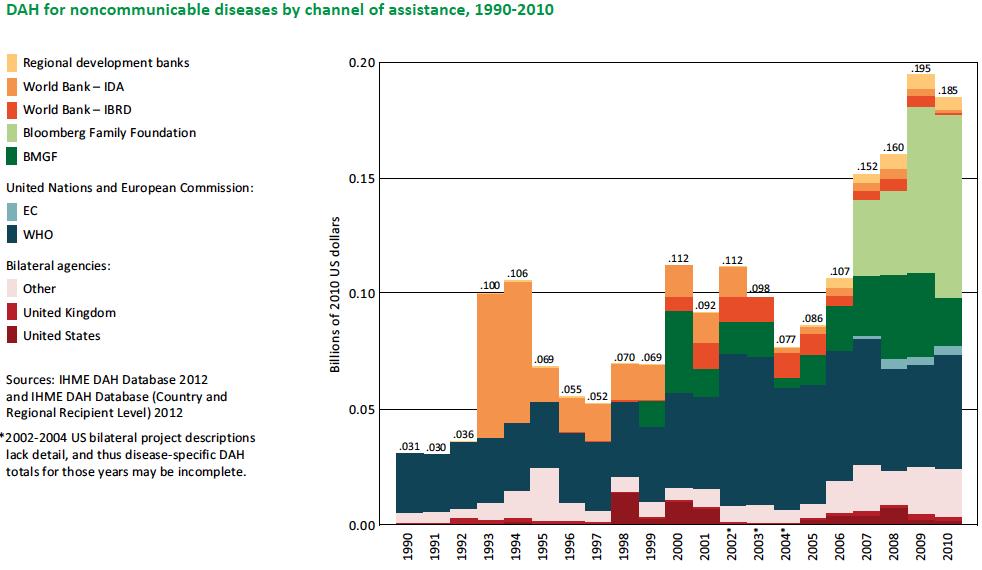 According to a new IHME report, only $185 million of the $28.2 billion spent globally on development assistance for health in 2010 was dedicated to NCDs. Donors spent $300 for each year lost to disability from HIV/AIDS, $200 for malaria, and $100 for TB, but less than $1 for NCDs. Nearly half of the funding for NCDs derives from a single source: the Bloomberg Family Foundation.

Donors have been reluctant to devote resources to diseases increasing fastest in China, India, and other middle-income countries, even though those countries are home to 70 percent of the world’s people living on less than $2 per day. Policymakers dismiss NCDs because their dominant risk factors are behavioral, despite study after study demonstrating that the NCD epidemic in developing countries is increasing fastest among the poor who lack access to adequate nutrition, education, and health care. Finally, donors have noted that substantial R&D occurs on NCDs, even though little goes to developing medicines and diagnostics usable in low-resource, low-infrastructure settings.

What Better Data Can Do for Global Health

The funding priorities of donors and intergovernmental institutions reflect humanitarian and political-economic considerations in which the global burden of disease plays only a modest part. Particularly amid tightening donor budgets, there is little reason to expect new aid to address the health trends that the GBD study identifies. The Bill & Melinda Gates Foundation, for example, hailed the study as confirmation of the effectiveness of the foundation’s infectious-disease focused strategy, but not as a reason for the foundation to devote additional resources to NCDs.

Yet the world’s health needs are changing. In the past, global health initiatives were dedicated to delivering food and health technologies to the world’s poor. These initiatives required tremendous donor resources, but could achieve progress even in countries with dysfunctional governments. But donors and international technical agencies cannot enforce the regulations now needed on smoke-free public places or maintain primary health care programs to manage diabetes. This is the domain of developing countries, where health spending is increasing and, on average, outstrips aid by a ratio of 18 to 1. The fundamental challenge in this emerging era of global health will be better governance and accountability for that health spending and its efficiency, not newer medicines.

The GBD study has a critical role to play in addressing that challenge. In March, IHME released its country-level GBD assessments and announced that those estimates will be continuously updated. These data would empower national governments to identify the NCDs and risk factors especially prevalent among their poor and increasing fastest.

International technical agencies and more experienced developed country health, trade, and regulatory officials can help poorer national governments design and implement practical programs for addressing priority needs even in low-infrastructure settings. Modest donor aid would allow pilots of such programs. The ongoing updates of the GBD study will help identify which pilots are working, assess their cost-efficiency, and improve the accountability of national governments for implementing them.

Fulfilling that transformative potential will depend on the sustained openness of the GBD study. Disputes are inevitable among scientists in any ambitious enterprise, but policymakers and funders need confidence before acting. IHME allows public access to its raw data and methodology eighteen months after publication, but will need to do so sooner and with greater guarantees that its many collaborators will do likewise to ensure that the study remains relevant for the governments that can put its findings to greatest use.

Click here for more information on the Global Burden of Disease study and its implications for global health and U.S. policy.

Thomas J. Bollyky is senior fellow for global health, economics, and development at the Council on Foreign Relations (CFR). He is also an adjunct professor of law at Georgetown University and consultant to the Bill and Melinda Gates Foundation.