Bringing Biogas to Billions: Why PAYGO Could be the Key to Scaling the Industry

Small scale biogas digesters (biodigesters) convert animal manure into biogas for clean cooking and high-quality organic fertilizer. They have been around for over 150 years – so they are by no means a new technology.

However, the market potential is still miles ahead of the actual number of units on the ground. Excluding China (which distributed biodigesters through a government-funded program), the market of small-scale farmers who might benefit from a biodigester includes 132 million households, according to our analysis. But only around 6.5 million systems have been installed in the last four decades, with the majority in India.

With my background in commercial business development, this was puzzling to me when I first entered the biodigester market. I couldn’t understand the discrepancy between the product’s value and its sales. If the benefits of biodigesters are so clear (as you can see in the survey of our customers below), why doesn’t every small-scale farmer already have one?

It just didn’t make sense: Something in the market forces was amiss. After exploring this dynamic, we identified two key obstacles:

Taking these obstacles into account led us to establish specific design principles when developing ATEC’s system. That’s why our first patented design was a plug-and-play Model M4 system that can be installed instantly and in any environment. We have now sold over 1,300 systems across the Asia-Pacific. Other enterprises have also had great success with their pre-fabricated options, such as Sistema Biobolsa and Home Biogas.

However, as ATEC* started scaling up we’ve realised that something even greater has been holding back the market – effective payment options for customers that spread the cost out, at the same time as they enable customers to save by using the system. Most don’t have the funds to pay cash up front for a system that can cost up to a quarter of their annual household income. While microfinance institutions have played a vital role in facilitating purchases from biodigester companies like ATEC* and will continue to do so, putting your land title at risk to buy a biodigester (as is the case in Cambodia) is a pretty high-risk scenario for a farmer.

While looking at this problem, our team started to research where this had been an issue for other technologies. It was at this point that we came across the following graph: 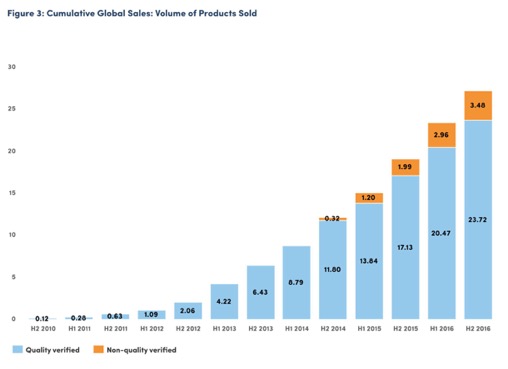 This graph is from GOGLA, the global association for the off-grid solar energy industry. It shows the growth of solar units (in millions) since 2010. We saw the same potential for this kind of hockey stick growth in biogas, a market with many similarities to off-grid solar – yet it hadn’t happened. The difference? PAYGO options that allow customers to pay off their purchases after taking ownership of their biodigesters.

Once we made this realisation, ATEC* started investing in the development of our own payment technology. We saw that, like solar, we had a distinct advantage: The product only has to be delivered once – meaning that it was ideally set up for customers to buy the product, then pay it off as they accrue savings and income increases from the outputs of free gas and fertilizer.

Having developed a national distribution network and an existing customer base across Cambodia, ATEC* is now at the exciting stage of introducing our PAYGO integration, which will allow farmers across the country to pay off the system in manageable monthly repayments. And we have an additional advantage, in that we are effectively a second mover in PAYGO after solar. That means we can partner with leading PAYGO software provider Angaza, which has immense experience in PAYGO payment management and processing from its work with the solar industry.

We recently announced our partnership with Angaza, with its CEO Lesley Marincola saying, “The ATEC* biodigester, combined with Angaza’s Pay-As-You-Go solution saves time, resources and improves air quality in the home. The impact across Cambodia and the system’s global potential is exciting.”

With our first commercial launch of PAYGO-enabled biodigesters to occur in Cambodia this August, we are excited about the immense potential of these biodigesters for Cambodian small-scale farmers: Their net income can increase by an average of $43/month by using one of our systems, but they’ll pay only $30/month for two years to purchase it. This means that even as they’re paying it off, they’ll be cash positive, with a rapid payback period of 1.5 years.

But for us, Cambodia is just the tip of the iceberg. We’re working with investors to get operations in Bangladesh up and running. And we’re looking for partnership opportunities with biodigester distributors, PAYGO solar distributors and others who have immense networks of small-scale farmers, but to date haven’t had the right biogas technology mix.

Cooking with wood kills roughly three times as many people each year as traffic accidents – with the majority of fatalities being women. The market potential for clean cooking is in the billions, and ATEC* will continue to trail-blaze to ensure that biogas is an integral part of reaching that potential.

Ben Jeffreys is the CEO of ATEC* Biodigesters International.