Building Corridors for Shared Prosperity: Seven lessons from Intellecap, IFC on ‘what works’ in international expansion of inclusive businesses

Developing countries share many common socioeconomic challenges including poverty, inequity and resource-constrained governments. Inclusive business models are increasingly using the power of markets to create positive change in these markets, by involving the poor as consumers, producers and partners in core business operations. And such businesses are on the rise – a 2013 Intellecap study found that there were more than 2,000 such businesses in India of which 220 had raised over $1.6 billion in risk capital, showing the promise to grow and scale. There is an opportunity to transfer such successful models across emerging economies rather than “reinvent the wheel.”

IFC (World Bank Group), in partnership with Intellecap, released a new report “Corridors for Shared Prosperity” at the Sankalp Africa Summit in Nairobi last week. The report is a repository of knowledge about “what works” in successful replication of businesses and presents a framework for systematic transfer. Eleven businesses across agriculture, health care and renewable energy that expanded from India to South Asia and Sub-Saharan Africa were identified for analysis. Their insights and experiences highlighted seven lessons on what drives success in cross-border expansion:

1. Transferability of the model: Product and technology-based companies such as Greenlight Planet (manufactures and distributes solar lights) and Barrix Agro (manufactures and distributes pheromone-based pesticides) which expanded from India to Africa were able to transfer more easily because they have higher margins than services-based models and therefore are able to better absorb higher costs in new markets. It is also possible to expand these models through business-to-business (B2B) trade partnerships, which require less operational involvement.

Urban-centric business models are also easier to transfer due to higher population density and availability of market support such as networks of suppliers and distributors.

2. Objectives of transfer: Business transfer decisions can be triggered by an organization’s internal goals and motivations, as well as external influences such as availability of grant funding that incentivizes transfer. Data from our sample set suggested that internal business objective-driven imperatives transfer financial sustainability and scale much faster than transfers that are incentivized by access to grants. Given the impact-driven nature of several inclusive businesses, the desire to scale impact vis-à-vis operations has also been a trigger for expansion through knowledge sharing. For instance, Aravind Eye Care has shared its model with over 300 hospitals around the world.

3. Systematic preparation: Nearly half of the successful transfer cases evaluated were early stage ventures with less than four years vintage. They were able to succeed in difficult environments with small teams and limited funding because of planned enhancement of their management, financial and operational strengths. Some of the key strategies implemented included: (i) identifying a full-time Africa lead from within the organization and investing in her/him over a period of time, (ii) ensuring profitability and good financial health of home operations, (iii) raising risk capital from home markets or international markets before moving to a new market, (iv) streamlining processes and systems so that newly hired teams can implement with ease, and (v) tweaking the decision-making structure to give freedom to new hires so that decision-making is not reliant on one or two specific individuals in home markets.

Often, these strategies can be more intuitive to pure-play commercial businesses than nonprofits. For example, SKG Sangha, which installs and maintains community-level biogas plants, built financial sustainability ahead of expansion by shifting its fundraising strategy to the sale of carbon credits. This led to a 275 percent increase in number of biogas units installed per year.

4. Choice of entry market: Business dependencies such as access to raw materials, presence of suppliers and distributors, competitive landscape, need for market building, type of customer segment, customer acquisition model, and need for customer financing were key considerations for inclusive businesses while choosing their entry markets.

Many businesses took a regional approach to transfer instead of a country-specific approach – e.g. Astonfield Solesa, which installs decentralized solar mini-grids for small and medium-size enterprises in regions prone to public grid failure, has built a team in Kenya that drives business in neighboring countries of Uganda and Tanzania through frequent visits and on-ground partners.

5. Adapting to local contexts: None of the businesses in the sample set employed a “lift-and-shift” approach in transfer. Instead, all studied their entry markets and business dependencies in-depth to identify requisite adaptations to various aspects of their business models. Some of the more common adaptations included identification of a different customer segment, customization of product or service to meet local consumer preferences, shift in distribution strategies, and adoption of cost-cutting measures to counter the increased cost of doing business. Most of these adaptations have been made over a period of time, using insights from local partners and early pilots.

As a case in point, Novartis Social Business Group runs a health care program called Arogya Parivar in India that educates rural poor about better health care practices and provides free doctor consultations. Along with this social benefit, the business side sees an indirect benefit in terms of increase of sales of generic drugs in these areas. When the model expanded to Kenya in 2012, the team realized that the comparatively “light-touch” model would not work in rural Kenya because even if the doctors prescribed medicines or recommended lab tests, these facilities were just not available for most rural poor. Hence, the model was adapted to include on-site lab tests and sale of medicines.

6. Deep local partnerships: Partnerships with local organizations were central to success of business transfer. The two broad types of partnerships observed were transaction-based commercial partnerships for sale of goods and services, and strategic collaborations with local firms to achieve common goals.

Partnerships are critical because they offer access to customers and market intelligence without requiring high investments and in short time-frames, and also serve as a medium to create a local identity for an inclusive business model. In several countries, a local partner is also necessary in order to register a business or acquire fixed assets such as land and real estate.

7. Phased approach: Several businesses initiated exploration of a market opportunity by first securing paying customers in new markets while operating out of their home markets. Typically, initial transfer formats adopted were trade partnerships for product companies and strategic alliances for services companies. Once a market opportunity was validated, businesses went ahead and invested in building full-scale Africa operations. Over a period of time, support from home operations in the form of funding and senior management oversight was tapered off and the new team began to operate more independently. Greenlight Planet expanded from India to Kenya in phases – initiating trade with African partners in 2009 out of its India office, then hiring a B2B distribution focused team in Kenya in 2012, and finally launching its own direct sales agents-based distribution channel last year. 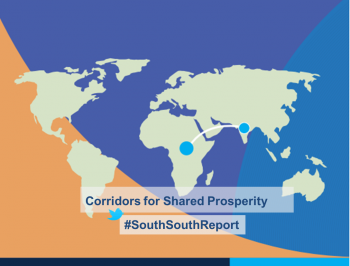 Raghavendra Badaskar is an Associate Vice President at Intellecap’s business consulting practice where he works on inclusive business strategies and impact investing sectors.