Millennials: who are we and how do we want to change the world? The key themes of this year’s Columbia Social Enterprise Conference sought to address these fundamental questions. Loosely described as adults born from 1980 to 2000, the millennial generation sees things very differently, said Professor Bruce Usher, conference organizer and director of the Social Enterprise Program at Columbia Business School. “[Like many] they are concerned over major sustainability issues,” he said. “The difference is, it is more of a ‘What do we do, how do we do it?’ and less of a ‘No we can’t do it because it is too big of a challenge.’ The question of challenge doesn’t come up with millennials.”

That type of energy was palpable at this year’s conference, where millennials joined baby boomers in a quest to define the next steps in sustainability for the millennial generation, who like Usher mentioned, seem to think that no obstacle is too great for our enthusiastic generation to overcome.

Millennials: Why we matter to sustainable investments

Millennials care where their money goes, according to Melissa Cheong of Imprint Capital Investors. She has found that “younger generations are really pushing mom and dad to start thinking about impact investing.” According to the U.S. Trust Insight on Wealth and Worth, 67 percent of millennials believe that their investment decisions are a way to express their social, political and environmental values, as compared to only 36 percent of the Baby Boomers. This is of particular importance due to the nearly 30 trillion dollars that is expected to be transferred from the baby boomer generation to the millenials in the next twenty years, according to an Accenture study. With 80 million millenials in the U.S. alone, where we want to invest this money will dramatically impact the investment space moving forward, said panelist Audrey Choi of Morgan Stanley. The growth of initiatives like green bonds, which support debt-based financing for environmentally friendly investments, from a market of only a couple hundred million in 2012 to over $40 BILLION this year, is only one such common example that Choi mentioned. Our incentives are changing, and we are going to be the absolute drivers of the growth of this field both through our own wealth and through our career choices, according to Choi.

The impact investing world still needs to prove this is profitable and measurable, however, noted Manuel Lewin, Head of Responsible Investment at Zurich Insurance Company, which has pledged to allocate up to $1 billion in green bonds. Lewin stressed the need for such sustainable investments to be intentional, that is, where each investment is impactful; measurable, to present non-financial impact in a comprehensible manner; and profitable, in that it is done in such a way to generate return to compensate for risk. And such investments do exist. He specifically called out Bank of America’s $40 million investment in the LED Street Lighting Energy Efficiency project in Los Angeles, which has reduced energy use by 63.1 percent and reduced carbon emission by 47,000 metric tons, as exemplifying all three requirements.

Such cross-sector collaboration was also highlighted as essential to scaling sustainable innovations in the health care field. Dr. Jacob Kumaresan, the Executive Director of the World Health Organization (WHO) Office at the United Nations in New York, stressed that the biggest successes in the health care sector’s efforts to reduce poverty worldwide have shown that “no single player can achieve success alone.” He discussed how in 2010, the WHO was tasked with combating the meningitis belt in Africa by reducing the vaccine cost to less than $1 a dose. Working together with PATH and the Bill and Melinda Gates Foundation, they were able to reduce the price of the MenAfiVac to $.50 a vaccine, and in 2011 the vaccine was introduced nationwide in Burkina Faso and in Ghana shortly thereafter.

Kanica Kahl, the managing director of Results for Development Institute (R4D), also stressed the importance of such private-public sector partnerships to overcome market failures in the public health sector. She highlighted one poignant example from her time with Clinton Health Access Initiative (CHAI), which succeeded in reducing the pricing of HIV/AIDS medication from $600 per child to $60 by buying children’s medication in bulk to create a viable market for the drug producers.

Yet the panelists all agreed that nowhere is partnership more important, perhaps, than in financing. “It is a dream,” Dr. Kumaresan said, “to have $9 billion dollars to buy drugs to combat diseases.” He stressed that it is imperative that the private and public sectors unite to find innovative financing options that raise funds in often untraditional ways. He lauded the UNITAID partnership with France and eight other countries, where the country levied a small tax on airline passengers to procure funds for TB, HIV, and malaria treatment, as one of the most innovative and successful private-public financing campaigns – one that has financed nearly half of UNITAID’s projects in the last five years. 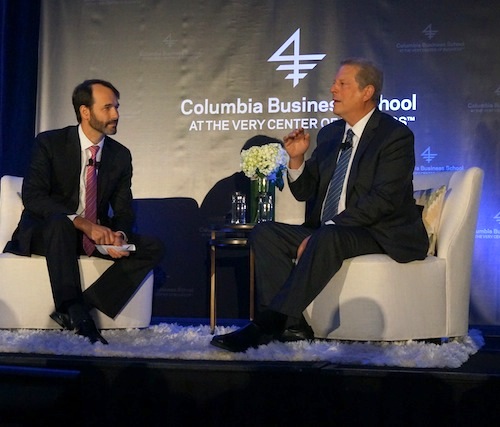 The theme of private-public partnership carried across to the final, and perhaps most-anticipated speaker of the day, former Vice President Al Gore. Speaking with humor and candor uncharacteristic in politics, Gore described several of the inherent flaws of capitalism that are steadily eroding not only our environment, but also our society. He discussed how the financial crisis, growing inequality, and a GDP measurement that does not account for positive or negative externalities, have demonstrated that our capitalist system is in desperate need of reform. He urged the millennial generation to fix the systems that are so clearly working against us, not for us. He stressed that we not only need to put a price on carbon in the markets, but we also “need to put a price on denial in politics.” To this end, he noted that business is far ahead of politics “by a long shot,” with the private sector providing two-thirds of the funding for energy efficiency.

Ending the conference with enthusiasm, he had one big message for the millennial generation: “Get politically active.” He encouraged us to install solar panels, focus on sustainable forestry, demand more of our politicians, and ensure that whatever our personal mission is within this sector, that we too make sure that saving the climate is part of it.

The energy and excitement that streamed through this year’s conference illustrated that millennials are indeed set to rise. Their vision, though critics may label it naive, is one in which the world’s biggest challenges are no match for their creativity and collaborative energy. They see the need to bring business into sustainability and sustainability into business, and won’t take “no” for an answer. Whether it’s health care, the environment, clean energy or fresh water, they see opportunities for collaboration and change. As Al Gore said, the groundwork has been laid for millennials to change the world. Now, it’s time for action. It’s time to rise.

Cristina Bernardo is Director of Academic Partnerships at Emzingo, a leadership and social impact firm.