Digitizing Savings Circles for the Base of the Pyramid: Bringing a centuries-old concept into the digital age

For those at the base of the pyramid, access to a formal bank account and financial stability are often not options. As a result, they are ill-prepared for disaster when it strikes, and one unforeseen illness, injury, fire, or natural disaster can cause economic damage so severe that the consequences can last for generations. With these needs in mind, savings circles (also called rotating savings pools, ROSCAs, tandas, chamas, and chit funds, among other terms) have sprung up organically over time as a way for individuals lacking access to formal banking to save and borrow money in a sustainable, secure fashion alongside people they trust.

Traditional savings circles have existed in different forms for centuries and are popular in both immigrant communities in the United States and emerging markets around the world. Structured as a collective fund, a circle requires that each member make regular contributions of a fixed amount, and the collected sums are then distributed to different members on a cyclical basis. Economic benefits include lowered transaction costs, improved flexibility, and greater access to credit (in the form of being able to borrow from the existing pool or leveraging that pool to connect with formal banks). Default rates have been close to zero across the board, due in large part to peer pressure. Numerous studies and experts (Yale, the University of Leicester, the University of Salermo, and the U.S. Federal Reserve, among others) have shown that savings circles are immensely beneficial for their users from financial and social perspectives: usage of savings circles promotes asset accumulation, consumption smoothing, human and social capital, self-empowerment, network integration, financial literacy, impulse control and long-term framing – just to list a few benefits.

New technology channels, particularly the internet and social media, provide promising avenues for the future of savings circles. Building off the success of traditional circles, several companies (particularly in the U.S. and Latin America) are attempting to formalize and digitize them in order to make them more accessible to a greater number of people. Some examples include Clearstreet, eMoneyPool*, OurSusu, People Powered Savings, Puddle, Tutanda, Yattos, and Tanomoshi (website forthcoming). By automating the savings circle process, these companies address key difficulties associated with traditional savings circles – limited geographical reach and time commitment – and offer further innovations to improve customer experience.

Startups in the digitized savings arena have significant potential to impact the social and financial inclusion of both existing users of savings circles and currently under-banked potential new users worldwide. For existing users, digitized circles expand the potential pool of participants and eliminate many of the traditional model’s logistical and organizational bottlenecks. Customers we’ve interviewed rave about this aspect: one told us, “I really like using this service even when I don’t have a specific savings or borrowing need – I just create a pool, set it, and forget it. I don’t even miss the money, and a few months later, I’ve saved $1,000!” The result is accelerated participation, the ability to join multiple savings circles simultaneously, the potential to tap wider social networks across a diffuse geographical area, reduced friction, and involvement from participants outside of a given social network. For individuals who are new to savings circles, these companies offer compelling opportunities to begin to participate in this centuries-old financial vehicle safely and securely. Although digitized savings circles currently rely largely on users having access to a computer, mobile applications could further facilitate usage of digitized savings circles in the future. 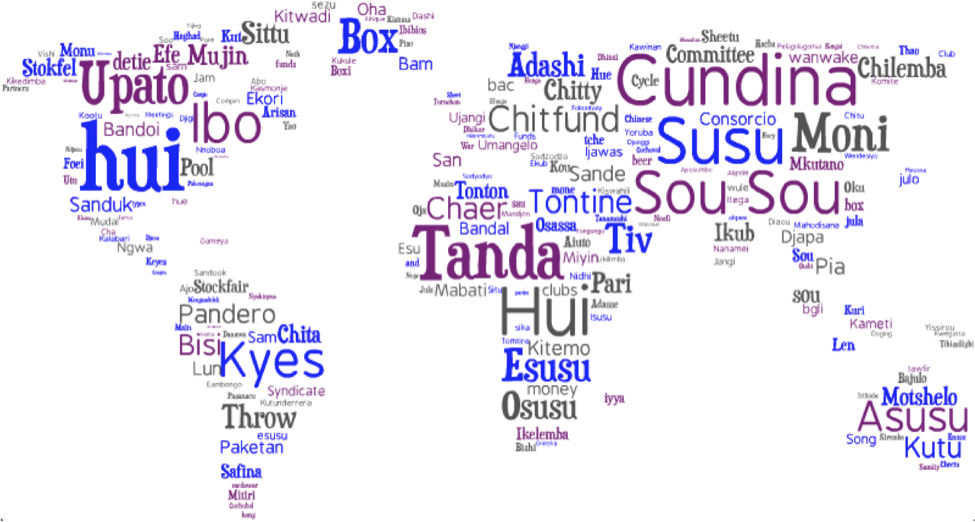 Despite the great promise of digitizing and formalizing savings circles, the companies in this space need to get a number of things right. For one, the scalability of marketing and customer acquisition in communities that are unfamiliar with savings pools is still unproven: educating this kind of consumer about the merits of the concept will be crucial. Further, it is unclear whether the offline social pressure that keeps default rates low in traditional money pools will be as effective online, particularly with groups of strangers. Some companies are looking to develop guarantees, ratings, and sophisticated risk systems to be able to manage this, while others are simply looking to amplify the social aspect of these groups by integrating them with social media accounts.

There is also currently no regulation that directly covers savings circles in the United States, and uncertainty around regulation remains as this broader industry scales. Further, the current versions of these digital savings groups require Internet access, a computer and a bank account, which may limit immediate accessibility and impact for those at the base of the pyramid. This is why we see a strong case for these models to be tested and refined with lower income communities in developed markets like the United States – where this basic infrastructure is generally in place for most sections of society. Lastly, different ventures in this space are still trying to figure out effective ways to monetize the platform: either by charging fees to the users or by linking up with retailers and mobile money platforms.

We at Accion’s Venture Lab see high commercial and social impact potential in bringing traditional savings circles online, and will continue to follow closely the exciting startups that are pioneering in this space.