Disruptive Sanitation: Can 3-Wheeled Carts and Better Septic Tanks Add Value to the Supply Chain AND Clean Up Jakarta?

In Jakarta, Indonesia, an international aid nonprofit is getting into some dirty business: the sanitation industry.

By all statistical accounts, the United Nations’ Millennium Development Goal of halving the world’s population without access to sanitation services is failing. Some estimate the world won’t reach that goal until 2049—34 years late.

For many of the world’s poorest, access to clean sanitation—like toilets and hand washing stations—remains a luxury. Annually, 50,000 Indonesians die as a result of poor sanitation; one person every 10 minutes.

The gravity of this problem, combined with the failures of previous efforts to solve it, led Mercy Corps’s Indonesia team to author a public health project in Jakarta with a nontraditional approach. Instead of simply funding a project to build latrines in Jakarta’s slums, they took a market-development approach designed to strengthen the value chain of Jakarta’s private sanitation services industry, utilized new technology to enable sanitation companies access previously unreachable people, and turned under-served people into customers.

Basically, their aim is to fundamentally change the sanitation industry in Jakarta.

A Mercy Corps project titled PUSH (Program of Urban Sanitation and Hygiene Promotion) undertook a market analysis of Jakarta’s sanitation industry. Funded by the Suez Environment Foundation, the project found a massive untapped market of potential customers in urban Indonesia. Around 94 million Indonesians live without access to sanitation services and 22 million people — more than two and a half times the population of New York City — have to pay for the use communal latrines. This incredible number of people, who live mostly in urban slums, have long been overlooked by traditional markets under the assumption they cannot afford sanitation services.

It quickly became clear that improvements in this system could lower prices, reach more customers and, through marketing and education, encourage more Indonesians to value and pay for improved sanitation services.

To include more people in the market, costs had to fall, while service providers and products had to specialize. By this time the PUSH initiative had ended and a new Mercy Corps program called RW Siaga++ (“neighborhood alert” in Bahasa Indonesia) began to take over the design and development phase. Funded by Coca-Cola, the U.S. Agency for International Development (USAID), and in coordination with the local Ministry of Health, the project designed two specialized products that helped increase access to the unmet sanitation market:

2. Improved Septic Tanks: A custom, specially-designed septic tank made from available, local materials was designed to meet the needs of up to five people. The tank requires limited ground space, has a built in bio-filter that separates and cleans the refuse without the use of chemicals, and only requires de-sludging of fecal waste once every two years. 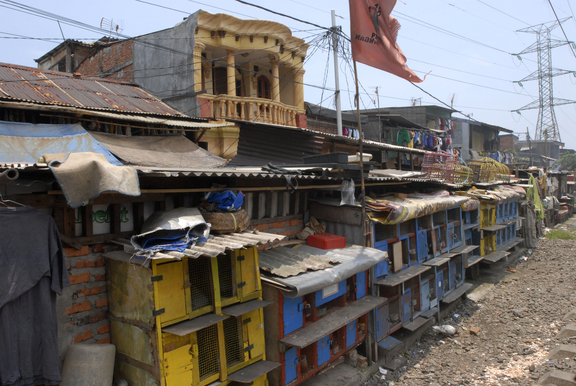 By sharing these innovations with the private sector, PUSH showed that the size of the potential sanitation services market had grown exponentially, simply by making new clients physically accessible.

The Kedoteng three-wheeled cart is able to maneuver tiny alleys to reach families living in even the most crowded slums, unlike large trucks that traditionally do the work.

(An improved sanitation system allows private sanitation companies to access new customers in narrow urban slums, where some of the 94 million Indonesians live without access to such services. Photo: Mercy Corps)

While working to bring supply costs down, the team recognized the other side of the market equation—demand—needed attention as well. Taking a cue from the for-profit world, Mercy Corps built some buzz about the innovations by launching a marketing campaign to educate consumers about the importance of sanitation.

The campaign included radio and billboard ads, to full-color comic books and school bags for children. They even hired a well-known comedian to talk up better sanitation systems.

To date, the project has surpassed many of its original objectives, having already increased access to over 9,000 individuals in 1,800 households. The project is not only achieving its own objectives but also having multiplier effects: Jakarta’s District Health Offices have replicated some of the educational aspects of the project, and the project’s authors claim that community and local government participation in the project has been one of its biggest successes.

Mercy Corps found that even with the sanitation market model in place, there is lot of work left to do. Consolidating services and improving the supply chain has lowered costs significantly, but installation still costs the target demographic between 150 to 250 percent of a month’s income. To address this, Mercy Corps Indonesia has been working with microfinance institutions to let customers spread the costs of their sanitation systems over 20 months, allowing families to pay for their new, private latrines with the savings they would otherwise spend on communal latrine access.

Still, the cost of materials to create the septic tanks and carts fluctuates, making it challenging to keep prices low. Microfinance institutions are interested in staying involved, but aren’t yet convinced that the sanitation market is a priority worth investing their own resources. Private sanitation companies have also been slow to refine their models in response to changing consumer demands.

The project’s ambitions are huge: it hopes to tip the scales by introducing lower-priced products, facilitating the entry of the private sector, and improving awareness of the necessity and affordability of sanitation services. If ultimately successful, millions of Jakarta’s poorest residents will have access to microloans to pay for better latrines and sludge removal, which will keep them healthier and leave more cash in their pockets in the long run.

Despite — and perhaps because of — the challenges that lay ahead, this idea is worth following. By adding value to the demand and supply side of the sanitation industry, Mercy Corps is proposing a sustainable and mutually beneficial solution that addresses one of the most dormant Millenium Development Goals, and fundamentally changes the role played by international aid groups.