While visiting Mumbai last month we had the opportunity to visit Dharavi, one of the largest slums in the world, which became world famous through the film “Slumdog Millionaire.” Situated in central Mumbai, about one million people inhabit an area of ??175 hectares. That is a population density 80 times larger than that of the city of São Paulo. At first we were hesitant to visit the slum as tourists because we weren’t comfortable with notion, nor the legitimacy of, “slum tourism“.

But after some research we joined a tour offered by Reality Tours, a for-profit private organization whose goal is to change people’s perception of Dharavi, which is often hurt by the same factors that make the place so famous worldwide. In the movie, images of Dharavi show a miserable, dirty, and poor location filled with injustice. The mission of Reality Tours is to show that, despite its reputation, Dharavi is also packed with ordinary people – workers with dreams just like the rest of us.

The tour, which lasts three hours, is divided into two parts: Showcasing the community’s commercial activity and its housing conditions. During the commercial portion of the tour, I was impressed with the diversity of economic activity – industries such as recycling, leather, ceramics and even food products, of which papads (a typical Indian snack) are the most relevant, dominated. Many of the products manufactured completely in Dhavarvi are exported to other Asian countries, such as leather goods and heavy machinery. The economic output generated in Dharavi is estimated at $500 million per year.

At the same time, another issue that has drawn much attention to Dharavi is the precarious conditions faced by workers, especially those in the ??recycling industry. Often the recycling process involves exposure to plastic and metal at high temperatures, and workers typically are not offered basic safety equipment. Moreover, the vast majority of workers have migrated from poorer parts of the country with no place to live, and consequently work up to 12 hours a day only to sleep on the floor of their workplace. When you consider that the average wage in the region is of $4 per day, it’s clear conditions are short of any concept of human rights. Our tour guide was also very forthright about the incentive that drives many entrepreneurs to use Dharavi as a base for their business: low government oversight and therefore easy tax evasion. 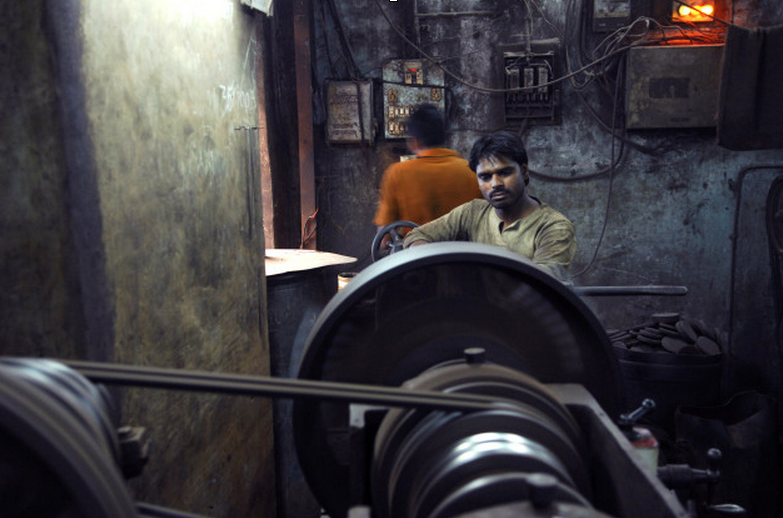 Apart from recycling, the of heavy machinery manufacturing is one of the most important economic activities in Dharavi. Photo credit: Tom Parker

Besides the goal of providing visitors with a deeper understanding of Dharavi, Reality Tours has also dedicated 80 percent of its profits (about 30 percent of gross revenues) for social projects. Most of these resources are used by Reality Gives, a sister organization that performs social projects focused on the community’s youth. These include providing classes in art, English, computing, vocational training, skill development and personal health programs. The last stop of the tour took place at the community center built by Reality Gives, where we observed a classroom of 16-year-olds learning English.

This is a perfect example of a hybrid organization. To avoid possible distractions related to the dual purpose as a social business, Reality Tours is responsible for business activities and the generation of revenue, while also taking account of activities that generate direct social impact for the population of Dharavi. So as the capital for social projects is directly related to the company’s profitability, the ability to generate impact and social change grow at the same pace as the business.

Reality Tours can also serve as a case study of another issue relevant to any social business: transparency and accountability. The organization has posted its goals for social transformation on its website, as well as some of the results achieved so far, such as the 142 students who are now educated in English. In addition, all financial reports since the company was established in 2006 are available to download. As consumers, having access to financial reports and actual numbers of young people impacted made us more relaxed about the objectives and the legitimacy of this organization.

Tourism is just another industry that can combine financial return with social impact and therefore offers incredible potential for social entrepreneurs. There are numerous private organizations with social transformation in mind that are operating in this sector; some examples include Aoka and Raizes Desenvolvimento Sustentável.

However, we were unable to fully understand the social impact of these other companies’ activities, at least through their websites. The many economic changes Brazil is facing, including a tourism boom, serve as evidence that business models like that of Reality Tours can find great success and still generate social impact at the same time.

This article was previously cross posted on NextBillion Brasil in Portuguese and was originally published on Mercado de Impacto (Market Impact).