It’s Not Enough to Get Micro-entrepreneurs Online – They Need a Marketplace : eBay Foundation focuses on connecting buyers with job engines

eBay knows a thing or two about helping people sell stuff online. So it’s no surprise that the eBay Foundation, created in 1998 with pre-IPO shares, would follow a similar path. The foundation has given away in excess of $30 million to non-profits and micro entrepreneurs. In 2011, it created the Opportunity Project, which takes a social innovation direction to tackle global poverty, supported with tech know-how from foundation volunteers as well as grants.

As I learned from my interview with eBay Foundation President Amy Millington, the organization is most interested in partnering with social enterprises that can serve as job multipliers. One of the foundation’s grantees that emodies this is early-stage social enterprise firm Kolabo. The Web services firm, which was incubated through Mercy Corps, has more than 200 clients in Indonesia. Founder Andy Dwonch explains how it’s not enough just to get small merchants online, they need to connect with a wider marketplace where their products will be in demand.

Scott Anderson: How does eBay Foundation approach its work, particularly with regard to social enterprise?

Amy Millington (Pictured below): Our strategic initiative, The Opportunity Project, is focused on expanding economic opportunity for people. We focus on emerging market geographies and a little on the U.S. as well. Obviously economic opportunity is a broad spectrum, but we’ve tried to home in specifically on efforts to lift people out of poverty through increasing their incomes and, on the small business side, hopefully, serving as a job creation engine. So we’ve partnered with a number of different social enterprises, mostly through nonprofit intermediaries.

Our theory is that market-based solutions are going to have the biggest opportunity for scale because they’re not bound by the limitations that traditional nonprofits have of chasing philanthropic capital. In particular, some of the social enterprises most interesting to us are ones that are helping small businesses grow, or microfranchises that engage low-income entrepreneurs in developing and distributing products that benefit the poor. So they have some kind of mechanism for addressing that poverty penalty that exists where the poor pay more. And we believe that technology-based solutions in particular have the capacity to be a great equalizer in that space.

SA: When you say technology-based solutions, do you mean digital solutions predominantly? 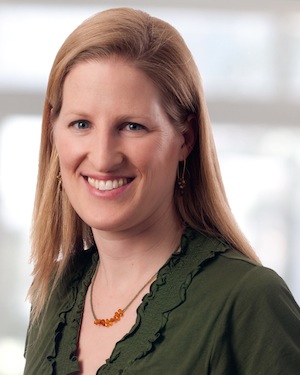 AM: We’re looking particularly at opportunities where access to the Internet is enabling people to access markets, that’s sort of a sweet spot for us given what we do as a business. Certainly cell phone technology and, more broadly, ICT are some of the things we’re looking at.

SA: When it comes to an organization or business you’ve supported, how do you judge success in terms of the impact intended? What to do you look at in terms of benchmarks?

AM: The goal with The Opportunity Project, beyond just the grant making, is that we’re trying to leverage all our company’s resources, including skills-based volunteers and the platform itself as well.

We set out three-year goals for The Opportunity Project. At the high level, our first goal was just to scale social innovations. Then we created a couple goals that cascade down from that. One is, because we’re focused on social innovation in the economic opportunity space, we want to help more than 10,000 people, and particularly low-income entrepreneurs, increase their incomes. We’re in the process of measuring that now, but we believe we’re managing to achieve that. The last goal is around increasing the access to affordable goods and services for people at the base of the pyramid. We’re counting lives impacted at the household level, because they have access to something like mobile airtime or clean water filters or solar lighting, products that improve their lives.

SA: How did your partnership with Kolabo come about?

Our partnership with Kolabo is a little unique for us, to come in at the early stage for a social enterprise. Many of the other organizations in our portfolio are later stage and have shown a track record of success – and we’re helping them advance in their scaling by connecting them with the tools they need to get investment capital and grow. That’s one of the goals for us of having a portfolio approach. Doing so enables us to play along the spectrum and take some bets on early-stage enterprises, like Kolabo, in the hope that they’ll really pay off.

SA: How did Kolabo get its start?

Andy Dwonch (Pictured left): I spent a number of years in international development work in the Middle East and elsewhere before starting Kolabo. And in those years I saw the huge trends of mobile penetration, access to the Internet growing exponentially, having more people get online and being able to participate by accessing knowledge and information. But I saw that small businesses, much like businesses in developed markets (when the Internet first emerged), were sort of grappling to figure out how to actually make it work for them. And so with Kolabo we set out to create a service-based model which would help businesses get over the hump and figure out the most effective ways to participate in this online economy. … To generate sales, to reach customers in new markets, etc. as a way to grow and ultimately create economic benefit in their communities.

In a nutshell, that’s what we’ve been trying to do. We’re still searching for the most effective ways to aid our clients in achieving sales growth, and the last year of doing this in Indonesia has been remarkable in terms of both learning and progress.

AD: The last countries I was based in – the Palestinian territories, Lebanon and Iraq – I was working with Mercy Corps the entire time. Then I spent some time in the U.S. working as a part of their social innovations team, which is a group that’s essentially trying to do more of what we’re doing with Kolabo: spinning out for-profit social enterprise models that we believe have the potential to achieve significant scale and social impact, and ultimately become sustainable models that can jump to other markets as well. At the time we were discussing the creation of Kolabo, the Arab Spring was erupting around the Middle East, and the initial inkling I had was Egypt, but the timing just wasn’t right from a political and risk perspective. Indonesia has been a country where Mercy Corps has done a number of very innovative social enterprise projects in the past. And given the technology trends and the mobile trends there, it seemed like a place where we could test out this model and ultimately refine it to the point where it could expand to other markets.

SA: I imagine it’s a bit of a chicken and egg scenario, in getting new businesses online and reaching a customer base. You want to help them reach new customers, but those customers might not be online. So how do you approach the client base in terms of assessing their needs?

AD: We started out with an initial hypothesis that the individual businesses, which have unique products they want to bring to a bigger market and are trying to build their brands, would benefit from having an individualized digital presence in the form of a website and complementary marketing services. That was the starting point in the initial business model we took to market, and we continue to build websites for dozens of clients every month. But we realized fairly quickly after setting up our first client websites that getting the traffic and the shoppers to their sites was going to be something that would take longer than most businesses were going to be willing to accept. People sort of thought as soon as you switched the thing on they would automatically have dozens of people contacting them to buy their goods. When getting our clients to try something new, they wanted to have an immediate result.

Over the last (six) months we’ve been working on a new approach, which is essentially helping our clients, in addition to the website services, to list their products on existing online marketplaces that are already popular, where shoppers in Indonesia are already going to buy things. So it’s sort of like a multi-channel marketplace listing service that we’re now testing and refining and ultimately looking to scale in Indonesia. So far it’s been able to deliver much more real-time results, and clients have been quite happy with the way the business is going so far.

SA: Are those platforms Indonesia’s version of an Amazon or Alibaba? Is that how we should think about it?

AD: Exactly. There are more than a dozen fairly significant marketplaces in Indonesia, Lazada being the biggest, as well as Tokopedia, you might have read about some of them. Some are purely for Indonesia; some are focused on other types of product verticals. But yes, they are fairly similar to the Amazons or eBays of the world.

We’re listing some products on eBay, some on Alibaba, and we’re helping some of our clients list on Etsy. We’re testing and seeing which marketplaces have the best results – what’s the best way to impact the businesses’ bottom lines.

SA: And most of these are product-based businesses as opposed to service providers?

AD: The three clients profiled in the video series that eBay Foundation put together are a pretty good cross section of the businesses we serve. On the marketplace initiative we’ve noted that businesses that are selling food products like Syariah’s (which is featured in the series) with their seaweed crackers, actually do quite well selling via these marketplaces. So over the last couple of weeks we’ve onboarded about 50 new microenterprises like Syariah’s into our pool of clients that we’re testing this marketplace initiative with. So we think we can drive significant value for microenterprises like hers.

SA: Are you able to disclose when you will be profitable and where you see the company in the next few years?

AD: We’re hoping to become a sustainable business toward the middle to end of 2016. We have several hundred clients right now, but we’re ultimately aiming to serve thousands of clients in Indonesia. At the point where we see getting over the hump we’ll be revisiting the idea of expanding to other countries in the region, and also possibly the Middle East.