“Engaging Customers and Clients in Social Change” was the theme for the 12th annual Social Enterprise Conference at Columbia University’s Business school earlier this month. The premise took on the practical, and therefore often overlooked, side of social entrepreneurship. While social entrepreneurs may have fantastic visions for transforming the world, they can’t accomplish much without energizing and motivating those on the receiving end.

Heimans spoke about the power of media and how it has enabled activists to mobilize support from across the world. He gave examples such as Anna Hazare’s anti-corruption protests in India and the innovative use of ’missed calls’ to gather support, as well as Alessandra Orofino’s campaign to protect a school in Rio from being converted in to a parking lot for the Maracana Stadium.

Among other things, Heimans advocated the need for a movement and not just a campaign when it comes to social innovation. He stressed the importance of funding it well – and funding it well by everyday people. And, most importantly, not to declare victory until you have achieved your funding goals.

Best started the talk with his inspiring story of how he conceptualized Donorschoose.org (well before satirist Stephen Colbert joined the board), and his candid account of his initial struggles was refreshing. From an idea that originated during a lunchtime conversation in 2000, donorschoose.org has since raised close to $200 million and helped more than 9 million students get access to school supplies including books, pencils, clipboards and computers. Public school teachers post classroom project requests on donorschoose.org and donors give whatever amount they wish to for the project they most care about. 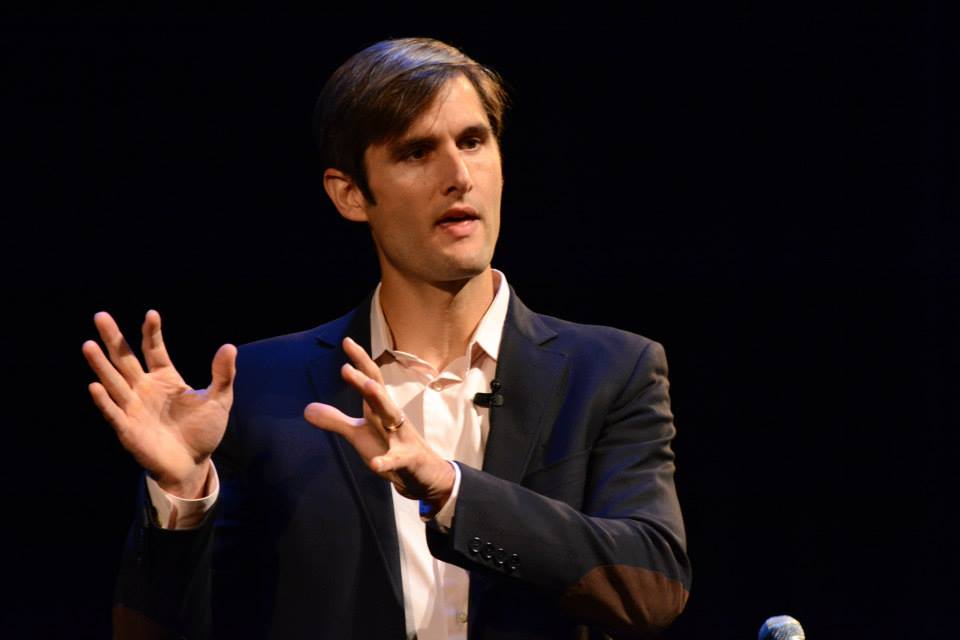 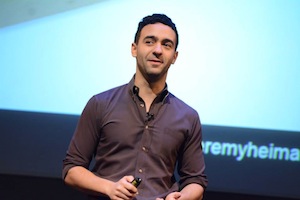 The second keynote speaker of the day was Deborah Dugan, CEO of (RED) and the session was moderated by CSR Wire President Joe Sibilia. (RED) was founded by Bono and Bobby Shriver to fight AIDS in Africa. The organization has so far raised more than $210 million and impacted over 14 million lives.

(RED) partners with popular brands such as Apple and Starbucks to sell (RED) branded products. While talking about the importance of the private sector in alleviating poverty and other social problems, Dugan spoke about United Nations’ global fund that was established to fight AIDS, malaria and tuberculosis. In the first five years, several countries came together to create a $5 billion corpus. However there was no involvement of the private sector.

This is when Bono and Shriver came up with the disruptive idea of engaging private sector in fighting diseases and brought together some of the world’s most iconic brands. Dugan spoke about the importance of a continuously evolving tactics and warned entrepreneurs against falling in love with their model. While talking about the importance of social media, she gave the example of Super Bowl in 2012 when the lights went off for a few minutes. A (RED) activist reacted by tweeting that only 2 percent of people in Liberia have electricity. The tweet was re-tweeted thousands of times and provided a great platform to highlight a problem that most of us take for granted, Dugan noted.

Breaking Out of Patterns

The breakout sessions were organized around creating engaged customers, social media and film, reaching mass markets, communities taking action. Additionally, workshops (known as spark workshops) focused on crowd funding. Below are a few observations from a handful of breakout sessions:

• In the “Designing for Two Billion” four panelists then spent couple of minutes each to talk about their organizations and highlight a design challenge that they are facing. Ed Chan-Lizardo, chief development & partnerships officer, KickStart International explained that Kickstart’s low-cost micro-irrigation pump for farmers in Africa that has led to a 500 percent increase in the farmer’s income. However, the adoption of new technology had been slower than hoped because the farmers tend to be conservative, very poor and thus risk averse, hard to reach, and in some cases have a low literacy rate. Kickstart’s challenge is to manufacture a product that is affordable, scalable and is adopted by the farmers. 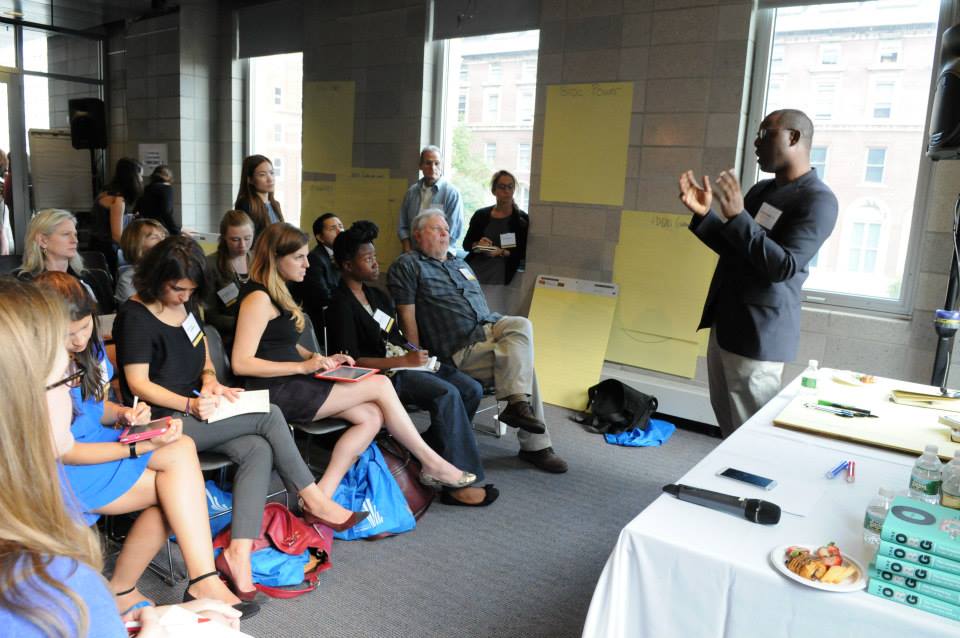 Connie Lewin, Strategic Partnerships & Marketing Director, Global, Sustainable Health Enterprises (SHE) highlighted the plight of millions of young girls and women in developing countries who can’t afford tampons and/or lack education about menstruation. In most of these countries, it is considered a taboo to talk about menstruation. SHE piloted in several schools of Rwanda with a product that costs half the price of imported products and is pending patent approval. But the company wants to move towards a more sustainable model. They are considering premium products made from natural materials to cross subsidize their affordable products for low-income women, a strategy that was part of several discusions. SHE’s challenge is to come up with a product (sanitary napkins, baby diapers, adult diapers etc.) and the criteria it should use to evaluate their impact.

Manmeet Kaur, executive director founder of City Health Works, discussed how to replicate the community health worker concept that is popular in developing countries for the United States. Through the model, City Health Works wants to demonstrate cost effectiveness and create jobs in low-income communities while combating preventive diseases such as diabetes and obesity. The team hopes to create group dynamics among people with similar ailments, while helping them improve their health. The program duration is 16 weeks with the members meeting everyday at the same time. Looking forward, City Health Works would like to partner with hospitals and insurance companies and get them to pay for some of these services. Their current challenge is to design a program with the right duration while making it fun and useful for the members.

Donnel Baird, founder of BlocPower, spoke about their challenge structuring financial returns to their investors. Blocpower finances and markets solar and energy efficient retrofits through people from low-income communities.

This is where the session got interesting and was a pleasant variation from the typical sessions in such conferences. The audience was asked to pick one of the panelists and then over a 20-minute period work as a group to brainstorm and recommend options for the challenges that each entrepreneur is facing. 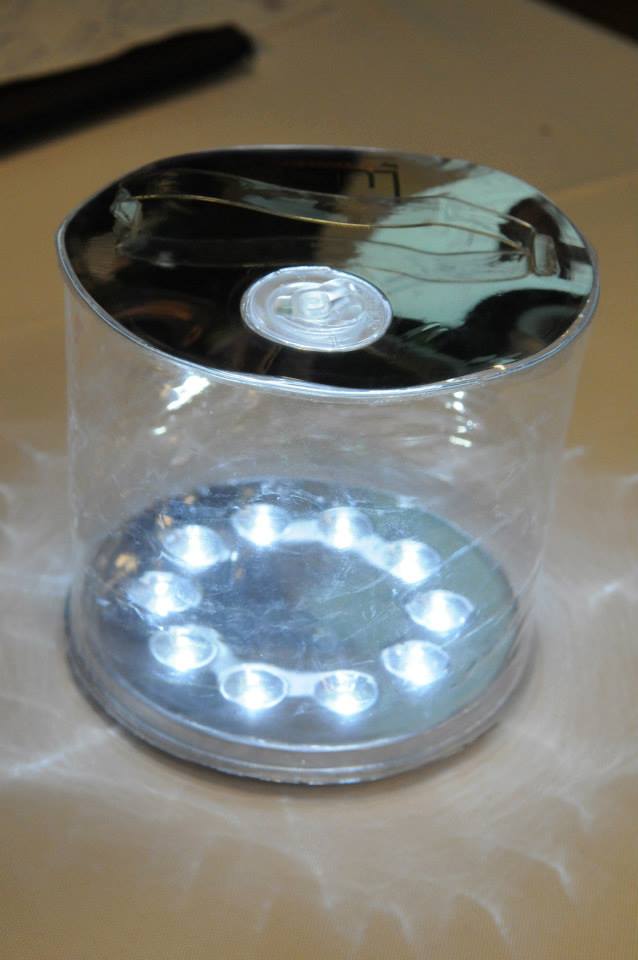 • Similarly, the marketing and distribution challenges of another solar light company, MPOWERD, was the focus of another of the breakout sessions. Their product, the Luci latnern (pictured right), which costs roughly $15 retail, is sold both developed markets and emerging ones.

The waterproof and easily compactable LED lantern is sold by major retailers in the U.S., which subsidizes lower pricing in Africa. The company has always had a for-profit mission.

“You can’t penetrate the base of the pyramid without being a profitable company,” said John Salzinger, senior director of business development and co-founder of MPOWERD. “If we didn’t grow in profitability, we wouldn’t grow.”

Participants in this session brainstormed and suggested a variety of tactics for improving consumer adoption – from teaming up with health NGOs to supply the lights to new parents to working with petrol stations and agricultural suppliers to distribute them to partnering with cell phone companies (especially for MPOWERED soon-to-be released lantern that also charges cell phones).

• During the “Frontiers of mobile technology: platforms and big data” breakout session, panelists shared their challenges in monetizing data, regulatory norms that encourage adoption of mobile technology, partnerships with banks and mobile operators, and methods for simplifying services for start-ups to participate and access to data in emerging markets. Shivani Siroya, founder of InVenture – which uses mobile data and financial management as a way of helping poor people build financial identities – shared her experience with the Mahindra group in India. Mahindra, one of India’s largest conglomerates, was entering the affordable housing market and sought InVenture’s help to identify potential customers. Since InVenture had access to people’s financial data, it provided the same to Mahindra group, which in turn allocated 10 percent of the units to low-income people. Mahindra wants to partner with InVenture in their other affordable housing developments, Siroya said.

• Another breakout session, hosted by Acumen – “Impact investing in action: Where would you put your money?” included Jessica Martin, innovation associate at Acumen, while Antony Bugg-Levine, CEO of Non-profit Finance Fund and a board member of Global Impact Investing Network, moderated the session. Martin highlighted dual approach of Acumen’s investees – efficiency and scale of market based approaches and the social impact of philanthropy. Among examples of Acumen’s portfolio, the most noteworthy was D.light Design. Acumen invested in D.light back in 2008 when the company had 1-2 pilots. Since then, Acumen has increased their investment through the series A and series B. D.light now works in 40 countries and has impacted the lives of over 20 million people.

Unlike typical sessions on impact investing that focus on the need for it, the current models and challenges, this session was more interactive and put the audience in the shoes of an Acumen employee. Martin spoke about a seed manufacturer in Kenya that had sought Acumen’s funding and provided everyone with a fact sheet. The audience was then given 10 minutes to read the facts and highlight their concerns with the investment. This gave everyone a real sense about how investors evaluate proposals. Some of the gaps that were presented included regulatory issues while competing with a government owned company, access to finance for farmers to buy seeds, and availability of infrastructure.

Overall, the conference was a good opportunity to network and listen to social entrepreneurs with innovative business models across the world. What was noteworthy was several speakers included Columbia University students/alumni. It seems likely the Social Enterprise Program at Columbia Business School has played a key role in shaping students’ perspectives about social problems and in helping them develop models to tackle these problems.