Enlisting Quacks in the Battle Against TB: An alarming study from Lepra highlights the need to train and regulate informal providers

In the developed world, tuberculosis hasn’t been a pressing concern for years. Thanks to antibiotics and improved living conditions, “consumption” has evolved from a dread disease to a cliché of 19th century novels.

In the developing world, of course, tuberculosis never went away – it’s second only to HIV/AIDS as the deadliest infectious disease, sickening 8.7 million people in 2011, and killing 1.4 million.

And now there’s growing fear that TB may be poised to make a comeback, as drug resistance and the microbe’s own evolution threaten to once again make it a global menace.

Though treatments are currently highly effective if taken properly, they require intensive support from trained health workers – starting with accurate diagnosis, and continuing through a standard six-month course of four antimicrobial drugs. Without supervised treatment, the disease can persist, spread to others, and develop into more drug-resistant strains. And unfortunately, new research from the international charity Lepra suggests that proper treatment is a rarity among the informal medical practitioners common at the BoP.

Rajnikant Singh, head of Lepra’s Bihar program, conducted a survey assessing TB knowledge among 561 rural health care providers in the northern Indian State of Bihar. The results were alarming: though the vast majority are treating TB, only 3 percent have received any TB training, and misconceptions about the disease are widespread.

In response, Lepra, which also tackles leprosy and other neglected diseases affecting BoP communities, is hoping to train Bihar’s informal providers on providing the right TB treatment, and integrate them into India’s National TB Control Programme. Rajnikant Singh and Sarah Nancollas, Lepra’s chief executive, spoke with NextBillion Health Care about the importance of these providers, and how best to enlist them in the fight against diseases like tuberculosis in the developing world.

James Militzer: Why did you decide to study TB treatment among informal providers in Bihar?

Rajnikant Singh: In 2012, the Indian government declared TB as a “notified disease” meaning that with immediate effect all private doctors, caregivers and clinics treating a TB patient are to report every TB case to public health centers. However, when the annual new case detection rate reported by Bihar’s TB control program was lower than the WHO statistics, it raised concerns.

The study in Bihar was the first of its kind in India, commissioned on the premise that a large number of TB cases in Bihar are going unreported owing to a large caseload being held by informal providers.

JM: Can you summarize your findings?

Regarding TB knowledge and current practices among these providers:

Regarding providers’ attitudes toward TB:

JM: Were you surprised by these findings, or was it basically what you expected? 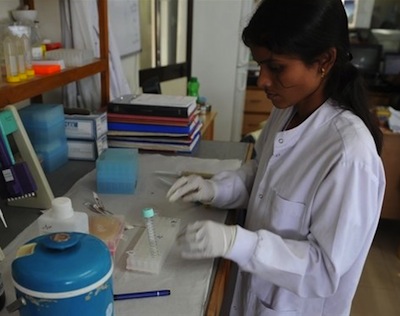 RS: The results were exactly what we were dreading all along, but such a study helps gather strong evidence to take appropriate action. The attitude of some of the informal providers towards their patients was definitely surprising to me and my colleagues, and the problem was much greater than we thought.

JM: What kind of treatment are informal providers currently providing for TB? With training, what would they be doing differently?

RS: In the case of alternative medicine providers, they tend to treat TB with Homeopathy, Yoga, Ayurveda or Unani depending on the stream of medicine they practice. The Rural Medical Practitioners usually provide mainstream medicine including different combinations of the TB short-course pills. However, they do not follow the correct protocols and this creates a very dangerous situation as it will potentially lead to an epidemic of drug resistant strains developing in Bihar, and a rising number of deaths due to TB.

With proper training, it is expected that these health care providers will stop using their medicines for treating TB and stop giving incorrect TB treatment. With training, these providers would start referring their patients to public health centers for diagnosis and free treatment. Some of these providers could potentially become the government’s TB medicine providers, entitling them to an incentive for every patient that is cured under their treatment.

JM: Why is it preferable to work with, rather than against, informal providers?

RS: Culturally people will seek health advice first from these practitioners, as they are sometimes part of the traditional health care systems. So we cannot ignore them. Additionally, 90 percent of Bihar’s population live in rural areas having limited access to public health facilities. The state has an acute shortage of health infrastructure with more than 50 percent of medical staff positions (including doctors, nurses and midwives) lying vacant. And so, seeking health care from quacks and other informal providers is often the only option available for the poor in Bihar.

Sarah Nancollas: Traditional healers or village doctors (quacks) and other informal providers are an integral part of the culture of many rural communities, particularly amongst tribal groups. We should recognise that they practice in areas where formal doctors will not go, public health systems are dysfunctional and private doctors unaffordable. It is in these communities that quality health care is needed the most. Given their proximity to their communities and the reputation they enjoy, until there is universal government coverage, investing in these informal providers through training and regulation is the only option we have to ensure good health of these communities in the long term. These providers must therefore be part of the solution.

JM: Why are quacks so prevalent, and what can formal providers and health care businesses learn from them in serving the poor?

RS: Low literacy levels, superstitions and cultural beliefs are some of the reasons why quacks are so prevalent. But they have also been part of the traditional health care systems of many communities around the world, particularly among indigenous groups which have little faith in public health systems as they are considered the ‘outsiders’. Ease of access, minimal language barriers, credit offers and holding a good stock of medicines compared to the public health facilities makes these providers popular within their communities.

SN: One thing that health care businesses could learn from these providers is to go as local as they can with their services, i.e. taking diagnostics and treatment closer to communities. Perhaps these could be managed by the informal providers who have been trained by the health care businesses, much like a franchise model. Lepra’s Sputum Collection Centres are an example. These are housed in public health facilities and run by volunteers who are usually quacks or informal providers.

JM: What are the simplest changes that quacks could make to improve the quality of their services?

RS: Quacks must be encouraged to improve their knowledge on diseases and diagnostic skills while helping them keep abreast of the latest public health schemes and services. A one-off training would not have much of an impact unless it is topped up by a refresher training and on-going support from the trainers. We have seen significant results only because of engaging with these providers long-term, as it takes time to change attitudes and practices. It is also important that these informal providers are aware of government initiatives that can help their patients at low cost, as this will enhance their reputation in their communities.