Farming to Invest in the Future

At TechnoServe, we talk constantly about impact. Virtually every program we design is built with scale in mind, and there are complicated formulas to figure out just how many lives we can touch with a given level of effort. This makes sense: When your motto is “business solutions to poverty,” you have to keep your eye on the bottom line.

But it is easy, between the Excel spreadsheets and the PowerPoint presentations, to lose track of what, and whom, that bottom line really represents.

Recently, we surveyed more than 150 farmers in our cotton program to better understand the impact that TechnoServe’s work has on their lives and livelihoods. We wanted to get beyond our core indicators – the figures we use across the organization to track our impact – to understand not only how our trainings affected yields and income levels, but also what that increase in income meant for health outcomes, access to education and financial inclusion rates among our clients and their families.

As I leafed through the stack of surveys that towered nearly two feet off my desk, I was very much in “data mode.” And I had an ulterior motive. I was looking for hard numbers to support the widely accepted hypothesis that income generation is a critical weapon in the battle against HIV/AIDS. Moreover, I was hoping to demonstrate that not only is income generation key, but that our specific economic interventions were actually improving health outcomes among vulnerable populations in Swaziland, which has the world’s highest prevalence rate of HIV/AIDS.

There is the woman who used her cotton money to buy a few chickens, which she has grown into a successful poultry business. She makes about $150 per month, nearly three times the average income for a cotton farmer. Her small business has become so successful, in fact, that she now pays neighbors to tend her cotton fields while she focuses on expanding her poultry enterprise.

There is the man who saves every penny he makes growing cotton to pay for his daughter’s university education. His own education ended after primary school, but he is determined that his daughter will have opportunities he never did. So while he reports that his family does not always have enough food in a given month, the income he makes from his cotton crop is giving his daughter the chance to lead, in his words, a “different kind of life.” 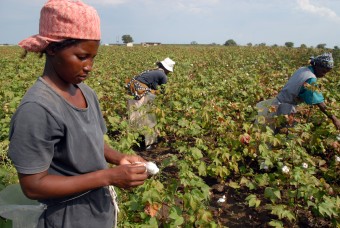 And there is the elderly woman who spends virtually everything she earns, and every minute in her day, caring for her terminally ill husband. Without cotton, she says, they would have literally nothing on which to live.

Reading through the surveys, I learned that the average cotton farmer we work with is 45 years old, and falls just above Swaziland’s poverty line – living on the equivalent of $65 per month. Two thirds are women, and most report that they are the sole breadwinner in their household. I also learned that while themes arise, there is no single “cotton story.”

Because cotton is harvested just once a year, the income generated generally comes from one to three lump sum payments. As a result, it tends to be spent on big-ticket items like school fees and livestock, rather than the more mundane (but no less important) monthly expenses like food and transportation. The man who is sending his daughter to university and the enterprising poultry supplier

are simultaneously unique illustrations of the impact that our work has on individual lives, and part of a broader story line about how income – and specifically these larger lump sums – provides an opportunity for people to invest in the things that matter most to them.

It is precisely this ability to invest in the future that illustrates why economic development is so important – especially in Swaziland. Public health organizations talk about the three stages of the HIV/AIDS cycle: prevention, care and treatment, and impact mitigation. The income that is generated by TechnoServe’s cotton program affects all three stages of the cycle. It works to break the cycle of poverty, which has been linked to risky behaviors that contribute to the spread of HIV/AIDS. It provides farmers – like the woman who is caring for her terminally ill husband – with the means to access medical care and treatment. Most importantly, by providing farmers with a means to send their children and grandchildren to school, to buy goats and chickens that serve as informal but highly effective savings schemes, and to generate the capital needed to start their own micro-enterprises, it helps mitigate the impact of HIV/AIDS on community and family structures. 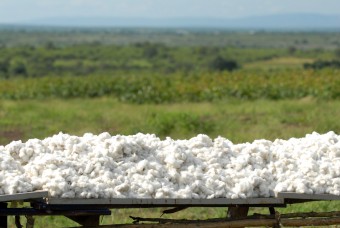 Depending on your desired impact and the other options available, cotton isn’t necessarily the best choice of income-generating activity to focus on. If you are looking for an activity that is ideally suited to people living with HIV/AIDS, for example, the low labor and land requirements of beekeeping make it a smarter choice – if you are lucky enough to live near the right vegetation. If you want to further women’s economic empowerment, on the other hand, the handicraft industry might be a winner – if you can link production to functioning enterprises and markets, and not simply produce trinkets which cannot be sold.

What came through in the surveys, instead, was the fact that increased income gives people the chance to invest in their future. And whether it was by buying a goat or sending their grandchildren to secondary school, the overwhelming majority of farmers we surveyed used their annual cotton windfall to do just that.