Game On: What We’ve Learned from Catalysts for Change

Have you ever had a really good idea for how to end poverty and change the lives of the world’s most vulnerable people? What if you could share your ideas and experiences in a worldwide conversation about innovative practices for social change?

For three days in April, more than 1,600 people took part in such a conversation through an innovative, engaged foresight public game called Catalysts for Change. For 48 hours, the global community collaborated on ideas to tackle one of the most pressing questions of our time: What new paths out of poverty can we discover together? As the examples above indicate, players begin the game with a Twitter-length 140 character card that conveys their innovative idea. Players then build on one another’s ideas by submitting their own cards and building chain reactions of innovations and solutions. Over the course of the game, more than 18,000 Twitter-length idea cards were played, marking contributions from 79 countries around the globe. While five of the top 10 finalists hailed from the United States, the player with the second most points, Pako Kisic, was from Peru and two of the other top 10 players came from Mexico, and one of the top 10 came from Turkey.

Catalysts for Change is a game based on the based on the premise that forward-looking collaboration on a global scale can yield unique insights into ways to create a more prosperous, equitable future. The game is based on a visual map designed by the Rockefeller Foundation and Institute for the Future that identifies four key catalysts for change: new evidence, new capacities, new rules and new stories. The map highlights several action zones and a core challenge, as well as signals of innovation and change drawn from the collection of newsletters from the Rockefeller Foundation’s Searchlight partners network, a group of global horizon scanning and trend monitoring organizations focused on illuminating pressing problems and potential innovative opportunities related to poverty, globalization, and development. 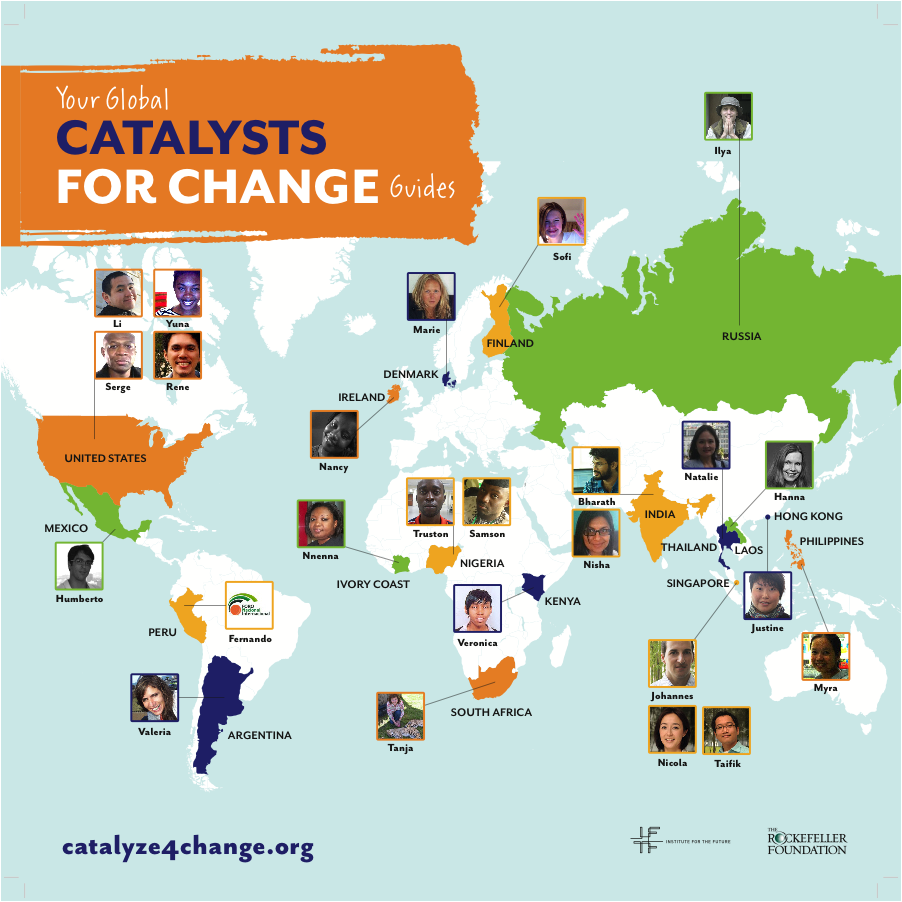 The game included the use of Twitter and Facebook as platforms for rallying the community, announcing missions and challenges and providing an opportunity to communicate outside the constraints of the game platform. A group of Game Guides from around the world engaged people in real time through blog posts and Twitter accounts to reach English, French, Spanish, and Chinese speaking game players. Some of the main themes captured during the game included: the importance of inclusive planning to prevent urban poverty and marginalization; the role of empathy, education and foresight in finding paths out of poverty; bureaucratic governance and lack of transparency hindering the progress of poverty alleviation.

Much more work is needed to understand the full range of ideas, facts, and calls for action embedded in the cards that were played, and that more complete analysis is proceeding. In the spirit of crowdsourcing the future, we are releasing the card data file to the public and asking you for your contributions:

Download all Catalysts for Change Game Cards and tell us what bigger stories you find in the game. Over the coming months we plan to undertake a process to sift through all of the idea cards that were played during the game to identify those that are the most innovative, using the action zones, regions, and word frequency as key guides in the selection process.

For more information on the game please read Catalysts for Change: Summary of an Experiment in Global Engagement and visit the game blog at http://blog.searchlightcatalysts.org/.