Hobbyist Makers vs. Global Manufacturers: Is 3D Printing Really the Solution to the Prosthetics Gap?

Social media erupted in applause in 2017 over the discovery of Stephen Davies, a humble man from Wales who uses his small garden shed to produce low-cost, 3D printed hands for people living with limb-loss and limb-difference around the world. “It’s more than a shed, isn’t it,” remarked one interviewer. “It’s proper life-changing for thousands of people.”

Indeed, many people around the world lack proper access to the types of devices Davies provides. As a certified prosthetist who has spent the last few years training providers of traditional prosthetic services in Southeast Asia, I have seen firsthand the vast needs and gaps in coverage, especially in low- and middle-income countries (LMICs) around the world. For many regions, existing traditional prosthetic care providers barely scratch the surface of the total burden for devices. In Myanmar, where I have spent the majority of my time, the International Committee of the Red Cross (ICRC) estimates that as many as 10 times the number of providers is needed to adequately meet the needs of the local limb-loss community.

The World Health Organization (WHO) estimates that only 5-15 percent of people with disabilities (PWDs) globally have access to quality assistive devices. With an overwhelming shortage of trained providers and the often-prohibitive cost of traditional devices, some in the limb-loss community have started turning to the growing global maker community to fill in the gaps, with hundreds of 3D printed prosthetic-like devices being delivered outside of traditional care systems every year.

But are hobbyist makers and their 3D printers really the stopgap the limb-loss community needs?

But it hasn’t been all gloom and despair. Companies such as Unyq and Prosfit have seen 3D printed products find their way into traditional prosthetic care systems in the West, while other startups, like OpenBionics and Ambionics in the UK, are poised to challenge the existing paradigms with functional devices at a fraction of the cost of mainstream commercial products.  Others, like Handicap International, have piloted and found 3D printing to be an “appropriate” addition to traditional prosthetic services in underserved regions around the world. 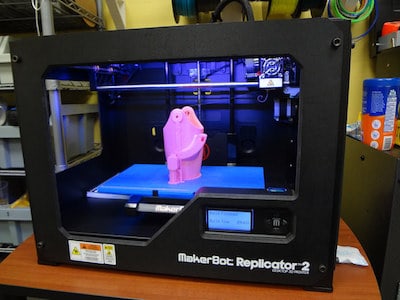 Parts of a prosthetic arm are created in a MakerBot 3D printer. Flickr credit.

But what of the Stephen Davies of the world? Do they have a legitimate place alongside traditional care systems?

As a prosthetist, I think the answer is yes and no. The discussion is often clouded by makers and members of media who suggest that the sub-$50 devices available on Thingiverse are comparable alternatives to traditional prosthetic care, when the truth is they serve completely different purposes. Traditional prosthetic care is indeed costly, but it includes high-function devices and a long-term support system that people can trust when it comes to returning to work or accomplishing activities of daily living. By contrast, maker-based prosthetic care is so affordable because it often includes less functional, less robust devices, and lacks the ongoing multidisciplinary support offered by traditional service providers. That isn’t to say they don’t have a place—they can be a great tool to help people explore their identity as a limb-different person and prosthetic wearer—but the two approaches provide fundamentally different services.

For this reason, it is probably healthiest if we start to see the two approaches as a “both-and” rather than an “either-or.” As hard as it is to imagine traditional prosthetic clinics “competing” with volunteer or entrepreneurial makers for high-volume, low-cost/low-risk devices, it is equally difficult to envision the maker community crossing the significant ethical, legal and quality assurance hurdles necessary to “compete” with traditional care.

Like many things in life, there is a ditch on either side of the road. Asking makers to fill gaps in traditional care risks oversimplifying the role of a prosthetist in the care continuum. While 3D printing may lower the barrier to producing a quality device, it ignores the arguably larger and more important role of a prosthetic provider in both helping a user to be successful with a new device, as well as managing the user’s fit and function over time. We must remember that a smiling delivery picture marks the start of a journey, not the end. Asking untrained makers to step into the gap risks leaving users want of the crucial holistic services necessary for them to achieve their goals.

Conversely, completely blocking out the open-source maker movement carries equal risk. Not only could it limit users’ access to relatively low-risk and low-cost interventions, it also potentially stifles opportunities for the sharing of new techniques and modalities that could improve outcomes and reduce the costs across the full spectrum of care.

If we are to move forward in any meaningful way, it will take some humility from both sides. From the maker community, it will take the humility to admit the limitations and expectations of the devices and services it produces. Like giving away cars in a town without gas stations, devices are but one part of a complex multidisciplinary support system we might otherwise call “prosthetic care,” and makers need to be honest about which parts they can and can’t provide. Are maker-based interventions “proper life-changing for thousands of people?” Maybe in some sense, but more than likely they’re low-risk, low-impact tools for exploring one’s identity—and that’s okay.

Similarly, those of us in traditional prosthetic care need to find the humility to loosen our stranglehold on the industry and admit that without some paradigm changes and challenges from the outside, the WHO statistics are unlikely to change. Whether we like it or not, 3D technology and 3D printing are likely here to stay, and we should embrace and celebrate the reduction of barriers to entry, not selfishly fight it just to keep the club exclusive.

I think if we really want what’s best for our clients, we must admit that we need each other. Prosthetists should want cheaper, easier-to-manufacture and more highly customizable devices. Makers should want more clinical know-how and more robust care structures.

For the sake of our clients, let’s stay in our lanes, and be honest about what we do and don’t provide—but let’s not be afraid to reach across the aisle in collaborative approaches that bring about the best outcomes for prosthetic users.