NexThought Monday: How Africa’s prosperity can grow … from trees

Smallholder farmers in Africa and across the globe do more than just grow food—they also help drive the world’s four trillion dollar food industry. On tiny plots of land, using industrious practices that conserve water and forests, 500 million farmers produce most of the food consumed in the developing world.

As they take on the task of growing enough food to feed an additional one billion people over the next 15 years, farmers are well-positioned to steer developing economies in a well-fed and green direction—especially if they turn to innovative tactics. Some farmers in Africa and beyond are already unlocking the potential of their fields to produce more food and other high-value products in an unexpected way that nurtures the environment and boosts their bottom lines. They’re capturing carbon and generating income by planting trees and shrubs on farms, a practice known as agroforestry. And they’re discovering that from rubber to medicine to peaches, a goldmine grows on the branches of every tree.

Agroforestry is already practiced across Africa. Farmers in Niger, for example, have successfully re-greened entire swathes of degraded lands with trees. Over the last 30 years, they have planted some six million hectares—an area larger than the land mass of Costa Rica. Similar efforts have added trees to the landscape in West and Central Africa. Farmers are already earning extra income from bush mango, African plums, bitter kola and other fruits and medicines that grow from trees.

But if Africa hopes to sustain its impressive economic growth and reign in the impacts of climate change, the continent needs to leverage agroforestry’s dual economic and environmental benefits on a larger scale. Attendees of the World Economic Forum on Africa this past week know that the continent’s economic success depends on private sector participation. But corporations also have a major role to play in boosting the continent’s economy and solving the world’s forestry woes through the field of agroforestry.

Indeed, some companies have already launched fruitful projects that demonstrate the myriad and mutual benefits that come from the planting trees on farms.

In Ghana, Tanzania, Liberia and Nigeria, Unilever is investing in the domestication and planting of the Allanblackia tree, a wild species valued for massive seeds that produce edible oil. Instead of developing mass plantations, Unilever chose an approach that’s gentler on the environment. The company distributed 100,000 seedlings to poor farmers, who will integrate these trees into their fields. Once the trees mature, the farmers will sell the seeds back to Unilever. They could earn a total of US$2 billion per year from the crop. As an added bonus, the trees they plant will soak up carbon—one tonne of carbon per 3-5 trees planted on previously unforested land. 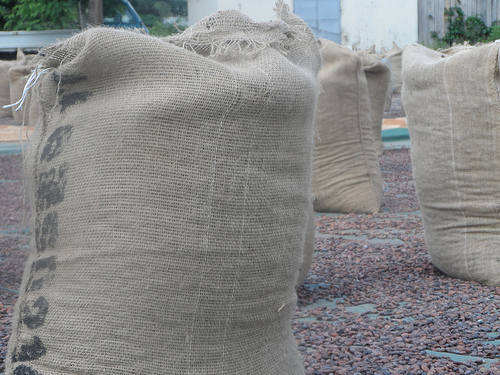 Similarly, Mars Inc. is helping the poorest of Ivory Coast’s farmers increase the sustainable planting of cocoa trees on their fields. To adapt to a global shortage of high-quality “black gold,” the confectionery maker is supplying 150,000 farmers with a higher-yielding variety of cocoa tree by 2020. The company will also provide these new suppliers with the tools and knowledge they need to grow healthy trees.

And in Kenya and Uganda, Nestlé is teaching farmers how to improve the yield and quality of milk—the main source of protein for poor people across Africa. Representatives of the Swiss candy company, for example, will instruct farmers about which shrubs, grasses, and trees they should grow to ensure a healthy diet for their cows. Some 155, 000 families will benefit from this project. So, too, will Nestlé, who could someday tap these farmers to serve as milk suppliers.

These mutually-beneficial arrangements help multinational food companies—facing a global squeeze on land and a shortage of raw materials—secure high-quality products. They kick-start farmers’ capacity to produce and earn more. And they add another layer of green to the landscape, providing greater protection against the harsh impacts of climate change.

Now is the time for Africa to realize its economic growth. Enabling Africa’s entrepreneurial farmers to plant trees on their farms is the surest way for the poorest of the poor to rise with the rest of the continent.

Private sector participation in agroforestry has already enabled smallholder farmers to afford better nutrition and sturdier homes for their families and better education opportunities for their children. The time is ripe to meaningful integrate agroforestry into Africa’s ambitious business plans.

Tony Simons is the director general of the World Agroforestry Centre. He gave the keynote speech today at the International Conference on Forests for Food Security and Nutrition.