How Do You Know You’re Really Reaching the Poor?: Tips for microfinance providers considering digital services

Though many microfinance institutions (MFIs) operate in impoverished areas, they often have little or no objective poverty data on the clients they have reached. Instead, their social performance management relies on assumptions. Pride Microfinance (MDI) wanted to avoid this problem when it rolled out its digital financial services programs this year, so it adopted the Progress out of Poverty Index (PPI) to measure the programs’ social impact.

The PPI is a tool used by institutions to quantify poverty levels. It consists of a country-specific questionnaire and look-up table, and measures the probability that a given client falls above or below the national poverty line. As part of Grameen Foundation’s Mobile Financial Services Accelerator project, the PPI was instrumental for Pride MDI to obtain evidence-based data on its poverty outreach.

For most PPI implementations, an MFI is trained on how to use the tool, then it conducts a pilot to collect data, and analyzes the data to understand poverty outreach. Most implementations are manual; branch staff collect data using paper and input information into a back-end system. So each time the MFI wants to review performance, it has to extract the data and then analyze it. This manual collection and analysis process is prone to human error, which requires another layer of quality assurance to confirm data accuracy at an additional cost.

Pride MDI initially piloted the PPI using the manual paper-based system. However, for the full PPI roll-out, it underwent a more significant integration by building a PPI-enabled management information system directly into its core banking system. Pride MDI came away with several learnings from both the paper-based pilot and the integration of a digital system for the full launch.

Lessons from the paper-based pilot

Communicate frequently with staff: At first, staff doubted the value of the exercise relative to the additional time that they would need to invest. Targeted, frequent communications to staff were key to maintaining an organization-wide understanding of, and commitment to use, the PPI. These employees were then able to engage with clients more effectively.

Train staff robustly: Although staff were trained on the PPI, some employees did not adhere to instructions. For example, enumerators/loan officers must read each PPI question and answer option in its entirety to clients. Instances of staff not adhering to these guidelines were noted (e.g., skipping PPI questions); other staff inaccurately entered and summed up poverty scores.

Additional training efforts needed to focus on ensuring that employees fully embraced and understood how to correctly administer the tool. Automating the PPI would reduce the (human) error rate to an extent, and that automation was already in process in preparation for launch.

Lessons from automating for launch

The tool, a module within Craft Silicon’s Bankers Realm Core Microfinance Solution, captures information on customer records, volumes of transactions, portfolios and profits, as well as social performance information [1]. It gives Pride MDI a variety of information on one screen, including a customer’s PPI scores and their movement over time. Pride MDI observed two takeaways from the process of automating PPI:

Make data collection compulsory: Once the PPI was integrated, Pride MDI made it compulsory for PPI data to be collected for any new loan application (the system would not accept an application without the PPI data included). Supplementing PPI knowledge and training sessions with a “compulsory collection” guideline, at least in the initial days, ensured that gathering PPI data would eventually became a consistent practice across all its branches.

Streamline and simplify the process through automation: There were challenges with the paper-based approach because of the potential for human error (such as those noted with data collection, above) and the time-consuming effort required to extract, access and analyze data. Pride MDI saw significant improvements after entering PPI data directly into the system and processing it through the module: data quality improved, data collection costs fell and turnaround time decreased. This approach enabled its staff to do much faster analysis.

When Pride MDI reviewed the data, it learned what many MFIs learn when first observing results – its client base was not as poor as it had thought. While almost 40 percent of clients were under the $2.50/day mark, less than 10 percent were below $1.25/day.

Pride MDI was also surprised by the gender data – poverty levels were expected to be much higher among women, but this was not always true. In the best-performing branches, such as City Center, Kawempe and Katwe, women featured lower poverty profiles. 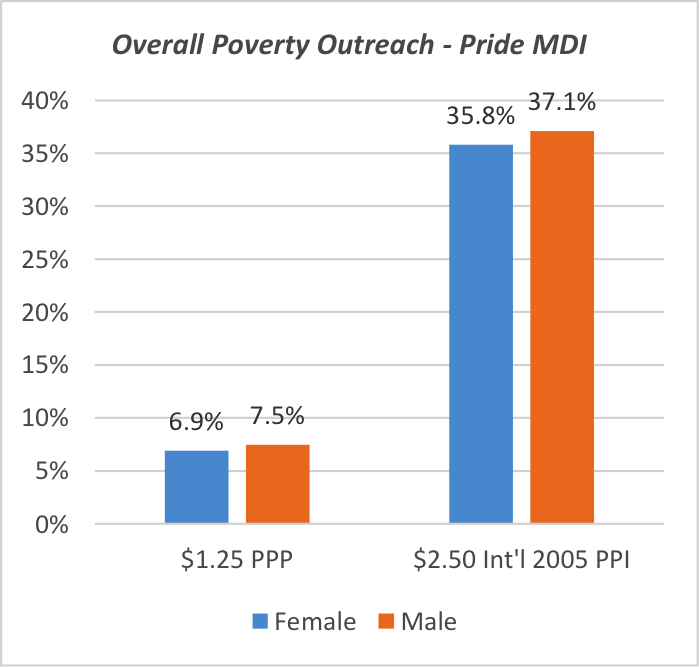 The results gave Pride MDI a better understanding of its current social performance. With the full automated roll-out across branches, the MFI is now able to not only develop pro-poor initiatives (such as digital services offered through the Accelerator program) but also measure the impact it is having on Uganda’s poor.

Byoung-Hwa Hwang is a Marketing and Communications Fellow at Grameen Foundation, and Francis Wasswa is Research and Product Development Manager at Pride Microfinance Ltd.

[1] This module, developed as a part of the Accelerator engagement, is being offered to MFIs by Craft Silicon at discounted rates. Contact Moses Murage (moses@craftsilicon.com) or Gilbert Byarugaba Agaba (gagaba@grameenfoundation.org) to discuss further.