In Haiti, the Fonkoze Model of Social Evolution – Part 2

Editor’s Note: This is the second in a two-part series on Fonkoze’s operations following last year’s earthquake in Haiti. The first post is here.

To really understand how Fonkoze was able to innovate while maintaining discipline in the aftermath of a major earthquake, you really have to go back to its beginning.

After decades of authoritarian neglect and oppression followed by political turmoil in his native Haiti (see Papa Doc, Baby Doc, and Jean-Betrand Aristide), Father Joseph Philippe led a group of 34 other grassroots leaders in launching Fonkoze, devoted to building the economic foundation of democracy in Haiti.

“The original vision for the organization was to encourage greater economic opportunity, reduce income inequality, and to become an institution itself that had democratic principles and practices infused into the organization,” Natalie affirmed.

New Fonkoze clients pay a one-time membership fee for life, and they quickly encounter an organization structure designed to communicate to them what a democratic institution looks like. They’re told what their rights are and how they can engage as leaders. Lending groups are based in credit centers, and each center elects a center chief. Twice a year, center chiefs gather at regional branch caucuses to discuss what’s working and what’s not, what’s new from Fonkoze, and what could Fonkoze do that it isn’t already doing. Regional caucuses also elect a delegate to send to the annual general assembly, held every July in Port-au-Prince. Besides travel re-imbursements, center chiefs receive no compensation. 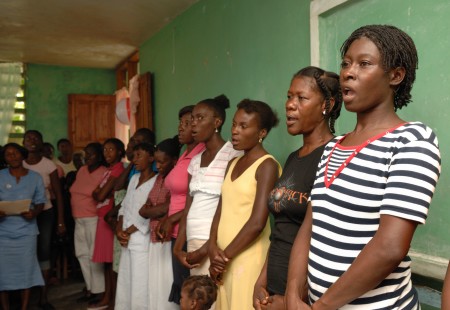 “We’re giving responsibility and leadership experience to people who wouldn’t have access to such positions by any other means,” James added. Center chiefs are even consulted as part of evaluating loan applications and assessing insurance claims, alongside designated “group mothers” as an additional leadership level.

In many ways, due to the deep involvement of clients in governance and operations, Fonkoze staff work on behalf of clients. The level of trust that can only stem from such relationships, built over many years, is what makes lending discipline possible without clients losing faith in Fonkoze.

“Time and time again we’ve delivered on the promise and this has just served to reinforce our clients’ faith in us and further motivate them to be engaged and responsible,” Natalie stated. “The desire to maintain a trustful relationship with our clients and to follow through on our commitment to help them make progress in their lives undoubtedly keeps us disciplined.”

Besides the trust between clients and staff, such deep client involvement in governance also allows Fonkoze to adapt, not just innovate, when it comes to new services or products. Feedback and new ideas are constantly sought out and tested, first in discussion and then in practice – ideas like Kredi Siklon, the new micro-insurance program, the post-disaster loan evaluation tool, and adopting the client protection principles. In this way Fonkoze is more than an organization; it’s really an organism living in a state of constant evolution in response to a changing, challenging environment.

When Fonkoze realized, for example, that it wasn’t reaching the very poorest of Haiti’s population, the Chemen Lavi Miyò program emerged. Adapted from the BRAC Ultra-Poor Program in Bangladesh, Chemen Lavi Miyò is an eighteen-month long intervention for families that aren’t quite ready for a microloan. “If you gave a loan to someone at that level of poverty, you’re only going to indebt them more,” James added. “They don’t have a business or any stable means of paying back a loan.” Caseworkers work with targeted families to get children in school and somehow create a stable source of income, getting them to the point where a microloan for business purposes makes sense. Even then, there evolved another intermediate step called Ti Kredi, in between Chemen Lavi Miyò households and Fonkoze’s primary body of group-based credit, Kredi Solidè.

Zafen.org, a brand new Fonkoze initiative to crowdsource interest-free direct loans for small- and medium- sized enterprises (SMEs), emerged as a result of realizing there is indeed a vast and underserved SME population in Haiti. While Zafen-listed businesses are not clients, many Zafen-listed SMEs are or would be wholesale suppliers to Fonkoze clients, and the jobs they create would help grow more stable Ti Machann customer bases. “It’s basically value chain financing from our perspective,” James pointed out. “Not everyone is going to succeed as an entrepreneur, and so that also leaves a lot of [Ti Machann customers] who really need jobs. SMEs are the job-creating businesses.” Fonkoze also screens Zafen-listed businesses for positive community impact, not just business viability.

The more Fonkoze evolves, the more it stays the same. Using democratic principles and practices, Fonkoze innovates and adapts on behalf of its clients. New products emerge as clients voice their needs and vision for the organization, and there are both formal and informal channels for incorporating their vision into the future of the organization. When Natalie and her team went out in the aftermath of the earthquake to find out what clients expected of Fonkoze, essentially the only new wrinkle in that process was the earthquake itself.