It is first quarter results and investors briefing season in Kenya, providing a chance to see how the market is evolving. And for the country’s leading financial services players, that evolution has been a profitable one. But beyond the celebration of M-PESA’s remarkable payments revolution, and the continued growth of M-Shwari’s mobile banking services, there are two other important developments in the Kenyan market.

First, the new Kenya Commerical Bank (KCB) M-PESA account, offered through a partnership with Safaricom, seems to be taking off rapidly. Chief Executive Officer Joshua Oigara said that over 50,000 people are now registering for the account every day, and that 1.5 million customers had registered by early May 2015 – just two months after launch. With KCB’s extensive branch and ATM infrastructure, more people are likely to entrust their savings to KCB than they have to Commercial Bank of Africa (CBA) – the bank that partners with Safaricom to offer M-Shwari. (For a nice comparison of the offerings, see FSD-K’s M-Shwari vs KCB M-PESA: convergence or divergence?)

Furthermore, the KCB account also offers fixed deposit and targeted saving options with interest rates ranging from 3-6 percent. However, only $1.2 million (a measly average of $0.77 per account) was deposited in these accounts in the first two months, suggesting that many of the 1.5 million who have registered to use the accounts have not yet done so. KCB however, claims that 75 percent of those registered are active users (i.e. those who have used the account in the past 30 days). So one wonders how many of those active users are just testing the system, how many are struggling to use it – and how many are considered “active” simply because they opened the account in the last month. KCB, sadly, has not told us the net deposits remaining in the accounts. 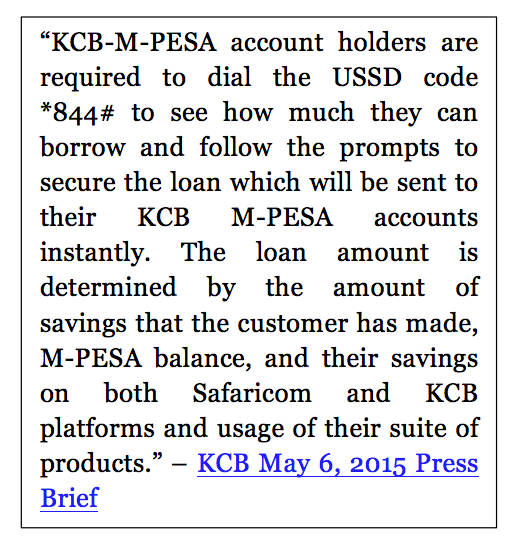 The KCB M-PESA account also offers a more flexible range of loans (from one to six months in duration) that are much more reasonably priced than CBA’s M-Shwari loans. Interest rates range from 2-4 percent per month – a significant improvement on M-Shwari’s single offering of a loan for a month at 7.5 percent interest. Two months after launch, KCB has already issued $11.6 million in loans, with an average loan size of $40 – suggesting that they have issued some 290,000 loans and thus, that the product is very credit-led at present. This appears to be reflected in the bank’s recent press release, which scarcely mentions savings and focuses on the ease with which registered users can access credit (see box, left).

The second important development is, almost inevitably, Equity Bank, which is beginning to deploy a Bank 3.0 approach, offering 24/7 “contextual engagement” services. Under Bank 3.0, banking is no longer something customers do or somewhere they go. It is an experience they completely control – in whatever place or “context” they are. This strategy will only really come of age when smart phone penetration is significantly deeper in Kenya (say, in three to five years) and so for now it still depends largely on agents. Equity Bank’s agent network grew by 60 percent to 19,336 from March 31, 2014 to March 31 of this year (PDF download), and now handles 45 percent of the bank’s transactions (compared to 8 percent in 2011).

Meanwhile, the bank has launched Equitel, its mobile virtual network operator (MVNO), even while the “thin SIM” card technology that would let M-PESA users access this network on their current phones remains mired in a high court case. By the end of March it had activated 665,661 “normal” (i.e. not thin) Equitel SIMs, of which 81 percent (539,185) had activated the m-banking facility. These m-banking customers had conducted 4 million transactions worth $52 million by the end of March 2015. In addition, the bank has started issuing loans on the Equitel system. Progress is modest to date – 34,501 loans totalling $1.1 million – at an average of $32 per loan. This average loan size is already markedly higher than M-Shwari’s loans (still only averaging $10 outstanding balance according to the data in the excellent CGAP/FSD-K analysis). That said, of course, the loan book is terribly small compared to M-Shwari’s 1.8 million loans outstanding at the end of December 2014. Indeed, to put it all in perspective, M-PESA has 13.9 million monthly users (a 14 percent increase over 2014) and M-Shwari issues 50,000 loans a day!

So what does all this tell us?

1. Kenya is showing the beginnings of mobile enabled financial inclusion through two different models – one through a bank-MNO partnership, the other through a bank running an MVNO. This is extremely important since, for all the assertions that mobile money is driving the rapid growth in financial inclusion, most mobile money systems remain payment systems and little else. Banks are all too rarely involved, and even when they are, they have often struggled to overcome the prevalence of over the counter (OTC) payments as the predominant transaction.

2. There is a growing focus on small-scale, consumer loans, not only from banks, but also from non-bank finance companies such as afb, many of which have their roots in payroll lending. But as more ambitious lenders with higher risk tolerance come into the market, it is fair to anticipate that it will be easy for people to get multiple larger loans via their mobile money accounts … and the results could be disastrous. The default-based credit reference bureaus in Kenya are post hoc, and really just create blacklists of people with poor credit history. So they don’t provide much help with curbing creeping over-indebtedness until it has engulfed and overwhelmed the borrower. (And I still worry about blacklisting someone for non-repayment of a $5-20 M-Shwari loan). Further, as India has discovered, even comprehensive credit reference bureaus do not pick up the underlying informal sector borrowing that is so prevalent in many countries.

3. Savings are still very much an after thought. Relatively few people save on M-Shwari – the average balance, according to Cook and McKay was USD $5.56 for all accounts, and $10.06 for those active in the past 90 days. Intermedia’s FII survey found that the single biggest reason customers deposit into M-Shwari is to increase their loan limit. The very initial signs are that the same may apply to KCB’s M-PESA account, which would be disappointing. Equity Bank has already developed a range of savings products – many of which are aimed at bringing young customers into the bank – and all of which are designed and ready for delivery on their Eazzy24/7 and Equitel systems. Equitel’s SIMs also provide a beautifully elegant system of “pockets,” based on Ignacio Mas’ ideas of characterising money for goals. So Equity may yet focus more on offering a full suite of financial management services, including user-friendly savings products, as part of Equity 3.0. Let’s hope so!