Looking for Hybrid Ecosystems to Serve the BoP: Scenes from the first BoP World Convention that took place last month in Singapore

The first BoP World Convention took place in Singapore at the end of August. For an inaugural conference, it attracted a remarkably large and diverse crowd—600 attendees from 40 countries that spanned a multitude of ages and topic specialties, plus a host of exhibitors. Most importantly, its 50-some speakers and panelists included strong representation from multiple sectors—businesses, NGOs, academics, social entrepreneurs, international agencies and governments. In fact, what set this conference apart from other BoP gatherings were its efforts to consider how these sectors might work together in novel ways to address poverty. This was more than just inclusive business, or market-friendly social enterprise, or public-private partnerships, but an attempt to forge truly hybrid, cross-sector ecosystems for change.

Singapore really does function well as a “hub,” and the conference was very smoothly run. It featured both distinguished keynote speakers and some extremely interesting panels — for example, on marketing to the base of the pyramid, on new opportunities in nutrition, on the impact of IT (including mobile IT) for the BoP. The conference was also unusually interactive — half of the second day was given over to a dozen Idea Labs, organized by topics, where attendees participated directly in their topics of choice— the future of education in Asia (led by Sesame Workshop Asia), or the implications of mobile IT for healthcare, or how to create low-income housing. 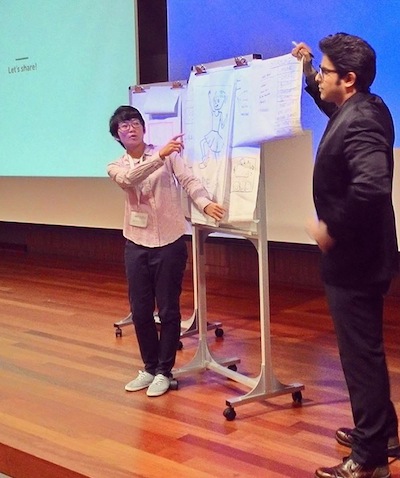 These Idea Labs turned out to be fountains of energy and creativity, so much so that it is too bad the discussions weren’t captured for broader sharing. A note to organizers: next year, how about student rapporteurs, taping and writing up highlights for each section, with editing by the session leaders?

An additional source of energy came from more than 60 social entrepreneurs from around the world (in additional to those who were speakers), whose participation was made possible by funding from the World Bank, Bill & Melinda Gates Foundation, Synergos and the Rockefeller Foundation.

Not only was there lots of hallway buzz, but more considered feedback has been favorable. A World Bank consultant writes: “It was really important for us to be here because we wanted to share our knowledge and best practices and to gain a better understanding of customer needs. Right now, poor people aren’t considered customers, but we have to recognize them as customers and this is the message that we want to send to the private sector and private companies.”

Another commenter says: “Attendees were very diverse and from all over the world. Business networking was good. We made some good contacts.”

Preparations for a second conference are already underway.

Al Hammond is senior entrepreneur and leader of the Health for All program at Ashoka, which works with dozens of health-oriented social entrepreneurs around the world.

Tags
Base of the Pyramid, conferences, events and competitions