Editor’s note: This week we feature a four-part series analyzing community-scale water solutions using the 5 P’s framework: Population, Problem, Product, Process, and Partnerships. The series was contributed by researchers from the Rural Market Insight team at the Centre for Development Finance (CDF), who recently spent a month in Rajasthan discovering Base of the Pyramid consumer preferences for treated water.

We encourage you to engage in the discussion by adding your comments and questions to the posts. You can also participate in Ask Acumen, which this week offers the opportunity to learn more about Acumen Fund’s work with social enterprises that address water-related challenges.

“Why do you buy filtered water?” we asked an elderly man from Ramsisar village outside of Fatehpur, during an interview in northeastern Rajastan.

He replied simply: “When you do not have something at home, then you have to go out and buy it. This is the dry season and we have no rainwater. Once the rain starts, we will stop buying water.”

Seems so simple, right? Wrong. Rainwater, government-run wells and filtered water plants, private filtered water and, of course, free water, were among options in the lucky villages we visited during a month-long pilot study with Sarvajal on filtered water studying BoP consumer preference. For the unlucky, there was no water at all.

The water crisis in India, especially in Rajasthan, has been chronicled time and again in the media with interventions by both the private sector and government to find solutions. In the time being, a host of community-based solutions have evolved to deal with not only impure water (excessive fluoride content) but also scarcity of water, which we observed first-hand during the study.

In dozens of interviews and focus group discussions in several villages we visited, rainwater was considered the purest water to drink, very “sweet” and best for cooking pulses and rice. Not only was it water straight from the sky (and for most, God) but it was also basically free, aside from the cost of building collection tanks or securing government support through the numerous initiatives that provide rainwater harvesting tanks or more commonly, rainwater collection tanks to villagers. Large concrete structures, known as “kunds” with capacity of up to 7000 liters, were built in some of the villages either at the community level or for private use. Stored water is used for drinking and cooking and lasts six to seven months. The water from kunds is either consumed directly or after filtering through a cloth. Unfortunately, as monsoons become scarce and droughts last longer, groundwater wells are drying up and less rainwater can be collected. Rainwater collection, once thought of as the most sustainable solution to the drinking water crisis, is becoming more difficult. 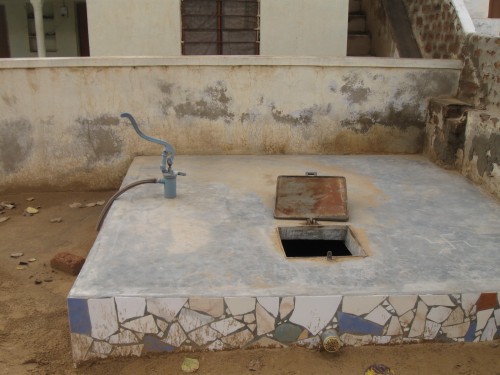 (Above: A recently built private rainwater collection tank in the village of Dejnath Dhani, this tank is only operational for part of the year. During the summer months, villagers must buy water due to a decrease in rain over the years).

Many villagers we met in BanGothodi village drank water provided by a government-financed and community-managed well with piped connections to households for roughly Rs. 26 per month. It was the cheapest alternative to rain, and often the only source of water. However, villagers expressed confusion about how, when, or even if the well was cleaned. While a local doctor detailed weekly testing and government well caretakers described bleach powder cleaning techniques, several villagers said they had never seen anyone clean it.

Near the village of Rolsabsar, a government filtration plant had been set-up as a pilot study by the Central Salt & Marine Chemicals Research Institute in partnership with the Gujarati Government and scientists in Delhi. The government covers the cost of electricity, infrastructure and maintenance. Operational since December 2009, the plant uses reverse osmosis (RO) technology to provide clean water for free to the villagers of Bodayser and even the fortunate few who live within walking distance, for the duration of the pilot. Because the water in this area is considerably high in fluoride, the plant was welcomed by all, well, almost all. Nearby villagers who did not have access to the plant refuse to pay for water in hopes that the government will one day set up a similar plant in their village as well. In the meantime, permanent solutions to their drinking water supply are limited.

The last option for drinking was free water with no strings attached. In many cases, wealthy philanthropists who wanted to give back to their ancestral towns and villages donated the plants. The water may not have been clean or always available, but who can argue with free? 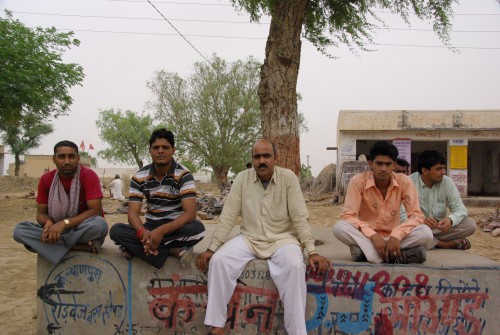 (Above: “We won’t even pay Rs. 1 for 20 L of water!” exclaimed a villager from Kalyanpura. A nearby government-owned pilot plant had been set up to provide free filtered water to its villagers. Considering its proximity, buying water isn’t worth it).

Water coverage is far from uniform. Many villages have multiple options, while in other areas potable water choices are limited. Availability of any type of water was always the first priority, followed by accessibility, affordability and purity. Private players, like Sarvajal, which provide drinking water solutions to both rural and urban communities, are limited but rapidly expanding. They are welcomed in water-scarce areas or in those without potable water for merely providing water; consumers are less knowledgeable or interested in the quality of water they drink. Often, private sources are tapped during the summer months, when groundwater is high in salinity, rainwater collection is low, or the land is completely dry. When the monsoon starts, villagers stop tapping alternate sources and resume drinking their regular village water. Not only does this cycle make business seasonal and inconsistent, more importantly, it indicates consumers’ misalignment of demand. They value water for water’s sake, not necessarily for quality, but for quantity. Quality is just an added, and often unknown, benefit that has to do more with taste and other subjective attributes.

How can there be many water options in some communities and no water just a few kilometers away? In the words of a wise old man from BanGothodi village, “There is no problem here (we have water). Go to the other side of this village, where there is no water, and help them. They don’t even have water to feed their crops.” Apparently, the grass on the other side of the fence is dying. This wise old man considers himself lucky – he has options; but the unlucky ones need options, too.

For most in the developed world, where rarely a second thought is given to water sources for drinking, bathing, washing clothes or dishes, tapping multiple water sources may be mind-boggling. But, the villages in India we visited use multiple sources depending on the time, day, month or year. Even in households that purchased filtered water, not all members drank it. Often filtered water would be used for specific tasks, such as cooking, unexpected guests or for the sick and elderly. They use various bottles, buckets and matkas (earthen pots) to differentiate types of water.

Perhaps this problem presents an opportunity for water providers everywhere: go where no one has gone before and turn low quantity into high quality. Address water quantity and quality hand-in-hand since neither issue alone has an easy solution. Problem identification through deep consumer behavior studies with an understanding of the nuanced context and current water situation is the first step for social enterprises in solving the issues related to scaling up and increasing their consumer base. Next step, addressing the other three new P’s.

Special thanks to David Fuente, Geetanjali Shahi, Bree Bacon Woodbridge, and the team at Sarvajal for their help throughout this series.