Not Enough Cooks in the Kitchen: The health impact of SE Asia’s shift toward processed food

Home cooking was the norm for most urban Indonesian households during the 1990s: eating out was considered a luxury. Choices of processed and frozen foods in supermarkets were limited or considered costly for most middle-income families. Similarly, eating out at fast food chains like Kentucky Fried Chicken, among the first in the market, could be only a weekly treat at the time.

Two decades later, things have changed dramatically – now, urban Indonesian households from all economic classes are finding that the time required to prepare food has made cooking both less attractive and less affordable. The question then becomes: why bother cooking when, for less than US $2, an Indonesian family can get a complete meal set (e.g., rice, chicken, some veggies, and a cold drink) at a nearby food court or food stall?

Today, the food industry – from the giants to the smallest-scale food producers – is dominating household food preparation in Indonesia and other Southeast Asian countries. Processed food – whether it is a ready-to-eat combo from a chain restaurant, an instant meal from the supermarket, or a deep fried snack from a food cart – is part of every family’s diet. The kitchen, simply put, has turned into a pantry fully equipped with a microwave oven, reducing the term “cooking” to reheating microwavable frozen food.

In the case of Indonesia, varieties of frozen or instant food (instant noodles being by far the most popular) are available in the minimart, supermarket, or even a small warung nearby. In many residential areas, you can also find food carts selling and yelling (as Obama fondly recalled in a speech during his visit to Indonesia) “sate!” (satay), “bakso!” (meatball), or “nasigoring!” (fried rice).

The Consequences of Emphasizing Taste and Appearance 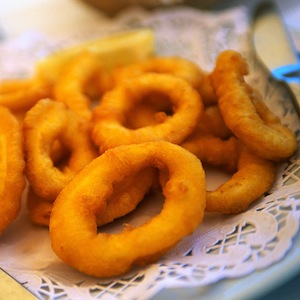 A good analogy for this processed food phenomenon is the growth of the fashion industry. In grandma’s generation, it was almost a requirement that everyone in the family (at least every girl) had to be familiar with knitting, sewing, and mending clothes.

The main consequence of this trend has been a reliance on the garment industry or artisan tailors for everything we wear, creating a local knowledge drain. In fact, we may be seeing the same trend within food consumption. Knowing how to produce food is no longer common knowledge—it is becoming exclusive to the food industry.

On top of that, there’s another consequence looming: while the business prospects appear bright, there’s concern over health and nutrition. Businesses are driven mostly by sales and profits, which, for the food industry, are much more about the taste and appearance of food than its nutrient content.

This means that the production of additive-loaded foods emphasizes the improvement of food’s color and texture to appeal to the largest number of consumers, who are less savvy about nutrition. Moreover, because shelf life is important, preservatives are used in quantities large enough to raise concerns over long-term health impacts.

What has resulted from the industrialization of food production is not only a mutual preference for synthetic appearance, but also a large shift to most people being pure consumers. This has created health problems, including malnutrition, tooth decay, obesity, diabetes and cardiovascular disease. Babies, children and young people are at greatest risk, because nutrient intake matters most for young, developing bodies.

While it may be quite difficult to reverse this growing trend, the challenge is to find ways to improve food industry practices while raising public awareness.

On the industry side, integrated standards that ensure hygiene and nutritional quality must be developed and enforced. This may sound easy, but it is going to be a long haul, considering the wide range of players in the food industry–from producers of raw materials to those putting together the finished meals, in both the formal and informal sector, operating at both local and global scales. In addition to creating the guidelines and supporting the facilities needed to ensure implementation, we need to build capacity among the players in the informal sector, coupled with financing to pay for improvements. Opportunities arise here for innovative business models and partnerships to be developed.

From a consumer standpoint, increased awareness is key to countering the massive marketing reach of corporate giants through various media channels. Once considered a minor part of the overall school curriculum, home economics can play a critical role in (re-)building knowledge of food production—not necessarily to train everyone to be a top chef at home, but to ensure that everyone has a basic knowledge of nutrition and food preparation. This will make consumers more conscious about the choices they make and put them in control, rather than being controlled by food producers.

This is not a job to be taken by a single person. Cross-sector collaboration is needed, where innovators, scientists, businesspeople, government officials, farmers, teachers, the media, and basically everyone bring their building blocks and put them together in a sustainable solution. This is exactly what Ashoka’s Nutrients for All movement is striving to do – connect key players in the food industry, the health sector, and all along the nutrient value chain to find new solutions for our current challenges in nutrition.

Eveline is a community mobilizer for Ashoka Changemakers based in Indonesia.

Editor’s Note: This post was cross-posted from Ashoka Changemakers’ Nutrients for All blog. It is republished with permission. The Nutrients for All competition is open for entries and you can read more from the series by visiting the Ashoka content partner page of NextBillion. Your idea could win up to $45,000 in unrestricted funding and may be eligible to win one of several special-focus prizes. The deadline to enter is June 19.