Optimism and Innovation in the World’s Former Murder Capital: Lessons for Detroit (and other cities) from Medellín, Colombia

Editor’s note: this post is based upon the original research paper: “Lessons for Detroit from Medellín, Colombia” (pdf) by the same author. The report is also available in Spanish.

As I entered my final year as a graduate student at the University of Michigan’s Erb Institute for Global Sustainable Enterprise this past fall, I resolved to embark on my first solo trip abroad. Given my personal commitment to urban revitalization efforts, I gravitated towards Medellín, Colombia—the country’s second largest city with 2.5 million inhabitants.

In just over 20 years, Medellín evolved from the world’s murder capital to its most innovative city. During the 1980s, Pablo Escobar ignited gang warfare that produced a citywide peak of 6,349 homicides in 1991. By 2012, Medellín decreased its homicide rate to just 12 percent of its 1991 figure and was designated “Innovative City of the Year,” sharing the Sustainable Transport Award with San Francisco.

Soon after my arrival, I learned that Medellín’s famously friendly inhabitants — called paisas — possess an indomitable spirit that was forged in the terror of Escobar’s reign. Buoyed by this resiliency, regional governmental officials created an integrated public transportation with the goal of providing safety, hope, and opportunity for all Medellín citizens.

I eagerly took to the streets to experience the two main public transportation works:

The Metrocable tells an even more sensational story about Medellín’s commitment to providing all citizens with access to the city’s amenities and opportunities. Officials built three lines with elevated cable cars between 2004 and 2008; together, these lines serve over half a million residents with nearly six miles of cable. The innovative structures transport citizens between Metro stations and remote barrios that house many of the city’s poor citizens in the mountains around the city’s perimeter. 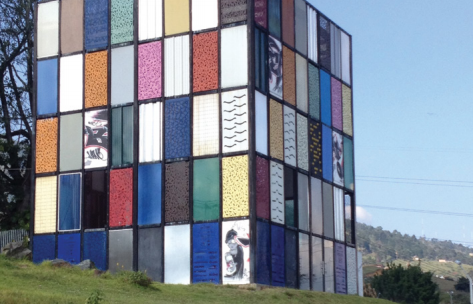 Residents in these neighborhoods have experienced substantial improvements in quality of life. The Metrocable’s integration with other Metro lines and its single-fare pricing system make it convenient and affordable to travel between the barrios and anywhere along the Metro lines. According to a United Nations Habitat study released in 2013, the Santo Domingo line reduced the length of a one-way commute to the city center by over 90 percent—from over two hours by minibus to just seven minutes by Metrocable—for the 230,000 residents that it reaches. The integrated system also has reduced monthly household transportation costs by nearly 30 percent of the national minimum wage income.

(Left: Public art in a barrio at the top of a Metrocable line.)

A Sustainable Cities Collective article highlights how Sergio Fajardo, who was elected mayor in 2003, provided a sense of dignity to the city’s poorest citizens by “literally [building] bridges (and trams) that connected poor neighborhoods to areas of economic vitality.”

In fact, the city’s creation of integrated public transportation infrastructure served as its keystone project, supporting future efforts to restore dignity and hope for all citizens, regardless of background and income level. Holger Dalkmann, board member of the Institute for Transportation and Development Policy, called sustainable transport one of Medellín’s “key levers to drive change.”7

Lessons for Detroit (And Other Hurting Cities Around the World)

Medellín’s recognition of public transportation as a precondition for social equity prompts consideration of Detroit, where inadequate transit service accelerated the city’s decline and inhibits its progress. Detroit isn’t walkable and serves only 60 percent of working-age residents with public transportation despite its relatively high percentage of households without a car.

It’s unsurprising, then, that 37 percent of unemployed Detroiters who responded to a recent Crain’s Detroit Business survey believe that the city’s inadequate public transit contributes to its high unemployment level, which was over double the national rate as of December 2013.

So what can Detroit, not to mention other cities both in the U.S. and in emerging markets, learn from Medellín’s success?

If Medellín can hinge its remarkable turnaround on public transportation, and if Detroit’s inadequacy in that capacity has propagated its own social inequality, then it’s clearly a critical area in which to focus the city’s future innovation and investment. If such a dramatic turnaround is possible in Medellín in spite of its violent history and geographic isolation, it’s undoubtedly also possible in Detroit given its rich cultural heritage, revived auto industry, and connectedness to other major cities.

To serve citizens long neglected, Detroit must deploy bold leadership, recreating the city in Detroiters’ own image. Following Medellín’s example, we should perceive Detroit’s challenge not solely as an exercise in enabling the city’s macro-scale economic recovery, but also as an opportunity to reintroduce social justice and economic opportunity through micro-scale community revivals. We must immerse ourselves in the details, the commonalities, and the distinctions across Detroit’s rich patchwork of neighborhoods, as we apply our knowledge and passion to the city’s resurrection.

Steve Davidson is a graduate student at the University of Michigan’s Erb Institute for Global Sustainable Enterprise, where he is simultaneously earning an MBA at the Ross School of Business and an MS at the School of Natural Resources and Environment. He will join McKinsey & Company in New York City after graduation.