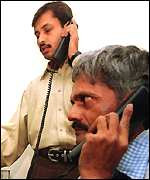 Last week, I reported on a conference in Pakistan organized by the Asian Development Bank (and in which I played a small role) to catalyze mobile phone banking in that country. The major banks all showed up, and heard the banking regulator tell them to get with the program. Later that same week, the Pakistan Minister of Information Technology, Awais Ah Khan Leghari, delivered the same message to the telecom regulator and all the major mobile phone carriers, with the Governor of the State Bank in attendance. In effect, both the banking industry and the mobile phone industry, and their regulators, are being told to remove barriers and develop workable systems, so that the huge unbanked population of the country (in which mobile phone use is spreading rapidly) can benefit. The government announced a coordinating committee to facilitate this, as well as a permanent focus group between the IT ministry and the State Bank, as well as a commitment to strengthen IT/telecom infrastructure.

Announcements don?t always translate into action. But Pakistan is moving with impressive speed to cut red tape and link the banking and telecom industries in ways that could have a major impact on commerce, especially for small businesses and ordinary individuals. In Southeast Asia, the Bridge Alliance of seven major mobile carriers is also coordinating technical standards to facilitate cross-border mobile phone banking. In the Philippines, the Smart and Globe mobile carriers now each have millions of customers for their competing mobile financial services models. These and other developments suggest that Asia is developing a lot of momentum, and could turn out to be the launch pad for truly large scale access to financial services for low income populations.