Politics can be frustrating – and nowhere more so than in the Middle East. Scan the global headlines at any given moment and you’ll find a predictable set of age-old conflicts wreaking varying degrees of havoc in countries throughout the region. But though its unique religious and tribal conflicts account for much of this unrest, many feel that the Middle East’s woes are driven in part by the universal concern memorably articulated in Bill Clinton’s first presidential campaign: “It’s the economy, stupid.”

Largely stagnant economies, high levels of inequality and the highest youth unemployment rate in the world make the region fertile ground for extremism and conflict. A focus on economic development in marginalized communities could have a significant impact on the future of the region. That’s why the Middle East Investment Initiative (MEII) is delivering finance and technical assistance programs that stimulate sustainable economic growth. The organization, a U.S.-headquartered non-profit, uses debt, equity, insurance, microfinance, loan guarantees and other financial instruments to help spark economic development and create jobs. It also promotes financial inclusion, whether in the form of small and medium-sized enterprise (SME) access to credit, affordable housing loans or banking for the poor, to boost the economies of countries throughout the Middle East and North Africa.

NextBillion Financial Innovation spoke with Jim Pickup, President and CEO of MEII, and Rami Khoury, its Managing Director, about the organization’s work, and the challenges and successes it has encountered while working in this troubled but dynamic region. Part one of our Q&A is below.

James Militzer: Give us a brief rundown of how the MEII came about, the partners you work with, and why you focus on development finance.

Jim Pickup (pictured left): MEII’s mission is to create innovative flexible finance options, for local businesses in the Middle East and North Africa that have the potential to grow, but may be too risky or not have the collateral for traditional finance. We put this organization together in 2005 in response to what, at the time, was real economic and political stagnation in the Palestinian Territories. Most banks in the Palestinian Territories (as well as in the Middle East and around the world) are very conservative, but they have a lot of cash – about 6.5 billion USD on deposit. But these banks weren’t lending to the Palestinian businesses largely because of the risk. So working with the U.S. Overseas Private Investment Corporation (OPIC) and the Palestine Investment Fund (PIF), we developed a loan guarantee facility that works directly with eight local partner banks to guarantee loans to Palestinian small and medium sized businesses. We started operations in 2007 and have approved roughly $120 million in lending, and disbursed around $110 million. Around 50 percent of these loans have been repaid, which represents around $54 million, and our default rate right now stands at about 2.1 percent.

We believe that this program has had a substantial economic impact in the West Bank, creating more than 8,700 jobs, almost 2,000 of which are for women. Based on this success, which is still ongoing, our board and several of our partners asked us to look at expanding our work throughout the region. So in 2012, in partnership with OPIC and USAID, we launched a similar $50 million facility in Tunisia; and we’re now looking to develop a regional Direct Finance Facility in order to have an even broader impact with businesses throughout the Middle East and North Africa.

JM: How big a role do economic problems play in the discontent in the Middle East, and especially in the Palestinian Territories, as compared to political issues?

JP: When you look at the region, the Palestinian Territories are an obviously unique situation. I would say that most of the dissatisfaction is a result of the occupation, but the economy is relevant. People don’t realize that the Palestinian Territories have some of the highest literacy rates in the region – over 90 percent. You get areas, particularly in North Africa, where there are higher unemployment rates among college graduates than there are for youth who did not go to university. So there are substantial economic distortions that for many reasons have been real challenges and are strongly linked to political and social unrest in the region more broadly. This is also true in the Palestinian Territories. But though it is not a substitute for a peace process at all, I think that an economic horizon – call it hope, call it a number of things – is an important element toward ultimately getting a just resolution for both sides. 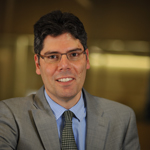 Rami Khoury (pictured left): In the Gaza Strip, the poverty rate is much higher than it is in the West Bank, at 38 percent of the total population, with 21.8 percent living in extreme poverty, according to World Bank reports from 2013. Following the war this past summer, those numbers are sure to rise. And you have a relatively young population across the Middle East. I think in Palestine, roughly 50 percent of the population is below the age of 18. And they’re the ones who are entering the labor force, not finding jobs because the governments are not hiring as many people as they used to, and the private sector is not growing at a fast enough pace to absorb these new entrants, and that’s where the ground is fertile for other groups to take advantage of this young, desperate and frustrated population. Obviously it differs from one country to the next, but poverty is a real issue in the region, as we saw with the Arab Spring – which began out of economic frustration – especially in the context of Tunisia.

But as Jim mentioned, the occupation is the core problem. There are less occupation restrictions in the West Bank than there are in Gaza. This gives us some breathing room to try to do some economic development. But again, under occupation economic development is a stretch because you ultimately hit some sort of ceiling that makes it difficult to do any further improvement because of imposed restrictions. But we’ve managed to keep the economic engine running in the West Bank, and that has been an important contributor to hopefully keeping some sort of political resolution possible.

JM: One of the products you offer is “political risk insurance” – could you describe how that works and how the response has been?

JP: Political risk insurance was and still is a relatively new business sector within the Palestinian Territories. If you looked maybe five to six years ago, the border crossings were very inefficient. They didn’t have modern scanning machines, people waited in line. At the border, they required a truck to pull up to the crossing and then transfer goods from one truck to another on the other side of the border. In that transfer there were sometimes damaged goods, so we were looking to ensure against some of those losses. This would help Palestinian businesses meet their order deadlines and not pay any contractual damages to their purchasers, and also ensure that the goods would actually arrive there in one piece. But because of the number of physical improvements at the borders, things have gotten better for those businesses in recent years and the need for political risk insurance in the West Bank has decreased significantly.

RK: Jim described to you the political risk regarding trade, but we also recently launched another loan guarantee facility in the Palestinian Territories, that specifically targets businesses in Gaza and Area C of the West Bank, which is under full Israeli jurisdiction. And there we do offer our partner banks political risk coverage in the event of losses, but only for those businesses that have received a loan guarantee. It’s a new product that we have launched, and we still haven’t underwritten any loans, but we do expect to see substantial demand, especially from Gaza right now. It’s targeting business loans to encourage the Palestinian banks to lend to these businesses in high political risk jurisdictions, and to encourage businesses to grow and expand by borrowing from the banking sector. The way it works is if the business fails for commercial reasons, whatever they may be, then we will cover anywhere between 50 and 60 percent of the loss. But if a political event occurs – so like if the factory in Gaza got bombed by Israeli forces – then we would cover up to 90 percent of the resulting loss of that loan (not the overall business loss, just the loss on that loan). Again, this is something new that we launched. It’s just a couple of months old and we actually signed agreements with the banks in June, and two weeks later the war in Gaza flared up.