Editor’s Note: This post is part of NextBillion’s series on Offline Innovation – one of several topic areas we’ll be covering through special series this year. Click here for more details on our 2018 series.

The need for humanitarian assistance and disaster relief comes into focus at times of extreme conflict or when natural disasters strike.

While shocking events occur infrequently enough to be just that – shocking – readers may be very surprised to know that the “normal” global status quo means that 5 billion of the 7 billion people in the world lack access to basic surgery and the safe anaesthesia care necessary to facilitate it. The Lancet Commission on Global Surgery suggests injuries and surgical disease kill nearly 17 million people a year, which is more than the total number of deaths from HIV, tuberculosis and malaria combined. In fact, millions of people die from surgically treatable conditions and injuries – trauma injuries, appendicitis, obstructed labour or hernias, for example.

Another Lancet report says that despite a low-risk profile and few post-operative complications, patients in Africa are twice as likely to die after surgery when compared with the global average for post-operative deaths.

This “norm” of inequalities in health care around the world is a complete disaster unto itself.

The humanitarian concerns embedded in the above statistics create an opportunity for businesses that tread a fine line between being a successful commercial enterprise, and playing a philanthropic role in the global health arena.

Our company Diamedica UK Ltd is doing just that, having developed what we believe to be the very first anaesthesia machine capable of functioning without electricity, and capable of creating its own medical oxygen. Called the Glostavent®, we believe this product design has made a real difference in low-resource and/or disaster-hit settings.

Glostavent’s ability to store power and create medical oxygen makes it an ideal aid to support surgery in regions of the world where these essential resources are scarce or nonexistent. In 2016, the product was awarded International Innovation of the Year at the Africa Healthcare Summit. 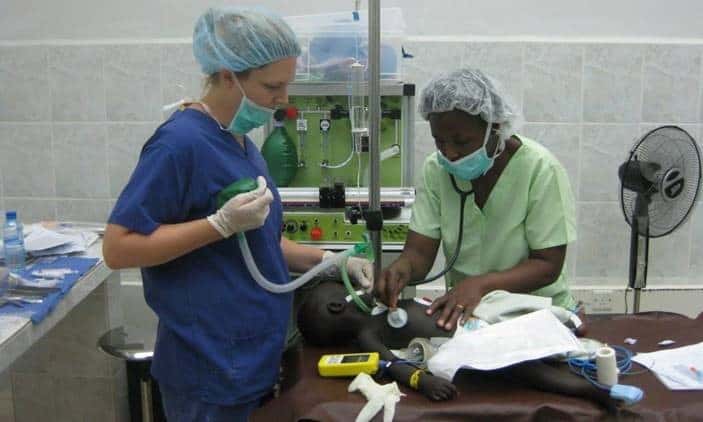 Diamedica supplies to humanitarian organisations such as the International Committee of the Red Cross and other NGOs, and we have worked closely with anaesthetists in more than 70 different low-resource countries for the past 15 years.

A medic can now jump on a plane at a moment’s notice carrying a robust “briefcase” that contains our company’s Glostavent DPA 02 portable anaesthesia machine as hand luggage.

It’s ideal for use in field hospitals and has been used in situations such as the conflicts in Syria and Iraq. Our machines have also delivered relief in crises such as the Haiti earthquake and Typhoon Haiyan in the Philippines. Its versatility and portability have generated interest from military sectors around the world.

The Glostavent is our best-selling product, with more than 1,000 units sold since the machine first went into production in 1997. The machine’s inventor, Dr. Roger Eltringham, is a world-renowned anaesthetist and the former vice president of the WFSA (World Federation of Societies of Anaesthesiologists). He devised the concept as a direct response to the challenges he’d seen during his work in Ghana.

Eltringham had a chance encounter with engineer Robert Neighbour, Diamedica’s director, who immediately saw the machine’s potential and has been developing and improving the Glostavent for the past 21 years.

Helping low-resource countries move toward achieving universal health coverage and actioning their National Surgical, Obstetric and Anaesthesia Plans (NSOAPs) is our chief motivation. The provision of appropriate equipment is pivotal to this. Fortunately, the major global humanitarian organisations have recognised the suitability of Diamedica’s equipment for low-resource environments – whether that’s our anaesthesia or respiratory products.

Reconciling patients’ needs with the resources you have and the environment you’re working in is a crucial concern, making the choice of appropriate equipment one of the most important decisions an aid worker will make.

We’ve heard from many physicians who have used our products. But one powerful story came from Dr. Wayne Morriss, who recently treated a 5-year-old patient from a remote region of Nepal. Morriss was struck by her calmness prior to a cholecystectomy (gallbladder removal). She was anaesthetised by his colleague Dr. Maurice Lee, who gave her a general anaesthetic using Diamedica’s portable anesthesia machine.

Morriss is an anaesthesiologist based in Christchurch, New Zealand, and has taught in dozens of countries around the world. He was chairman of the Education Committee of the World Federation of Societies of Anaesthesiologists from 2012-16 and is currently the WFSA’s director of programmes. The surgical camp in Mangelsen, Nepal, had been advertised on the radio and many people walked for days to be seen by the surgical team. Approximately 1,000 people were seen in the clinic, and the team operated on 100 people. Three general surgeons – two from New Zealand and one from Nepal – did a range of procedures in adults and children, many involving regional anesthesia or ketamine, but also a number requiring general anesthesia.

“There is a need for surgery everywhere – at home in New Zealand as well as in resource-poor countries like Nepal,” Morriss said. “What stood out for me was the almost complete unavailability of surgery and anesthesia in this remote part of Nepal. I think that all the team realised that we were only scratching at the surface and there will continue to be a large unmet surgical need for some time.”

With two operating tables in the main room, a concentrator supplied oxygen to both tables, and the team also had a single Glostavent DPA 02 portable anaesthesia machine with pulse oximetry and noninvasive blood pressure monitoring, which sells for around $4,000.

“I felt completely confident in the equipment I was using,” Morriss told us.

Humanitarians come in many different guises and without their efforts, the world would, arguably, be in much worse shape. There’s no doubt that in addition to the much-publicised work of huge international agencies, the work of individuals like Morriss is making a significant difference in terms of saving lives, alleviating suffering and maintaining human dignity.

Diamedica is now expanding its reach by increasing engagement in public-private partnerships. We helped deliver an obstetric anaesthesia refresher training course in Tanzania in January, deeply conscious that keeping activities community-centred is vital.

Responding to a need expressed rather than wading in and imposing solutions to supposed challenges is pivotal to the bonds of trust we’ve made around the world. For example, when we were approached by Philibert John Tegambirwa, an anaesthetist based at the very remote Bukoba Hospital in the Kagera region of Tanzania, we delivered exactly what he asked us for – the refresher course. This was achieved with the help of a UK-based charity, Safe Anaesthesia Worldwide (SAWW), with the assistance of Tanzanian anesthetists Dr. Bernard Kenemo (Bugando Hospital) and Dr. Kaino (Kilimanjaro Christian Medical Centre), and visiting Dutch anaesthetist Dr. Henriette Willigers.

Safe Anaesthesia for Somaliland (SANSOM) was another partnership – one that aimed to train and equip 30 new anaesthetists. While Somaliland still doesn’t have one single clinical anaesthesiologist, the upshot of SANSOM is that the country now has nurse anaesthesia providers in all its six regions – something it never had before. Check out this short film about it.

We have also expanded local partnerships, establishing distributors around the world who ensure the sustainability of sales and other projects. While our own biomedical engineers travel extensively to carry out maintenance visits, our in-country networks mean there is round-the-clock biomedical engineering support for hospitals close by.

Devising partnerships to support global health development is the bottom line for Diamedica, and for many companies for which social benefit is on par with profits. Our most powerful motivating force is helping developing countries achieve the World Health Organization’s aspiration for Universal Health Coverage by 2030.

It’s a tall order, but we’re getting there.

Top image: Dr. Wayne Morriss works in Nepal. Above: The Glostavent portable anaesthesia machine in use. Photos courtesy of Diamedica