For the uninitiated, the Fat Tuesday paczki (pronounced: punch-key) is a fried sticky donut treat stuffed with cream or fruit filling. Enjoyed by the Christian faithful and secular alike, the pastry is consumed just before entering Lent – a season of repentance.

After eating half of one of these Polish pastries, I quickly settled into a sugar and fat-induced haze. I didn’t consider what went into the consumption of this confection (or much of anything else for that matter), let alone the type of fuel required to the fryer.

But on Wednesday, I was reminded after our content partner Acumen Fund published a post by Sean Moore, a portfolio consultant, who spent seven months in Accra, Ghana helping to set up the Acumen Fund’s West Africa office and launch its portfolio. He recalls ordering up a tober, a “ flour-based dough that is deep-fried in palm oil and is similar to an American donut” from an Accra roadside chef named Auntie Akos. Instead of a coal or wood-burning stove, Akos uses a cleaner, and fairly rare, gas cookstove. It led Moore to note: “The challenge to date in achieving widespread uptake of fuel-efficient stoves is that market conditions, preferences, and practices vary drastically across regions – even within relatively small geographic regions – and thus the design, specifications and price of the stove must appeal to relatively specific demands. Basically, there is no ‘one size fits all’ strategy that can be implemented and replicated across multiple geographies.”

Indeed, Auntie Akos mentions that many folks stick with the dirtier coal or woodstoves and steer clear of gas out of fear of accidental fires. But the emissions and toxins released from dirty cook stoves or open fires used by up to 3 billion people worldwide is responsible for the deaths of up 2 million people a year, according to the Global Alliance for Clean Cookstoves, which is made up of NGOs and cookstove makers. The organization’s ‘100 by 20’ goal calls for 100 million homes to adopt clean and efficient stoves and fuels by 2020.

Key to reaching that goal is creating one industry standard defining what constitutes a “clean” cookstove. The alliance and the Partnership for Clean Indoor Air are co-hosting a workshop after recently working with the American National Standard Institute to submit a proposal to the International Standards Organization for an interim, voluntary, consensus document for cookstove standards. More on that project here.

Bryan Willson, director of Engines & Energy Conversion Laboratory and co-founder of Envirofit, is one of the people helping to devise this standard. A few months ago, Willson gave me a tour of the Fort Collins lab, where the team has tested hundreds of cookstoves for several well-intentioned companies, as well cut-rate and low-quality competitors. Inside one of the test chambers (pictured below), engineers and students can test fuel and thermodynamic efficiency of cookstoves, as well as emissions, including toxins like formaldehyde and cyanid, that many stoves give off while burning. 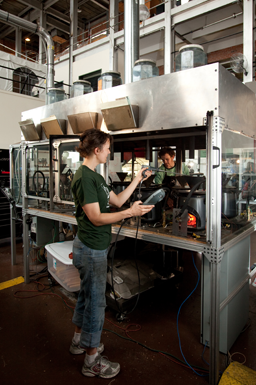 The donor-sponsored Envirofit, which we’ve featured on NextBillion in the past, recently released a catalogue of stoves ranging in price and function, and has sold more than 300,000 units, mainly in India and Southeast Asia. It also expanded into Ghana late last year. 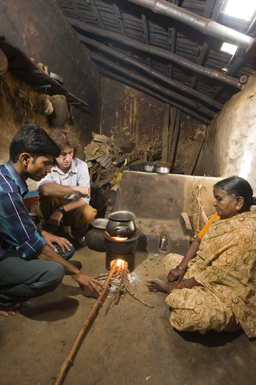 “What we’re trying to do is bridge the gap between some very good stoves that are too expensive and some very low-end stoves that don’t perform,” Willson said.

The rapid growth trajectory has prompted Envirofit to re-evaluate whether it makes sense to stay a nonprofit enterprise.

“One of the challenges we have now is as the volumes increase, you have to finance inventory,” he said. “In a for-profit business you would borrow against the value of those assets, but a lot of those same (loan) instruments aren’t available in the nonprofit world. So as the company scales up and the need for scaling capital grows, there’s an argument to re-examine that model.”

In the meantime, Willson and the CSU students continue their mission of evaluating cook stoves – a process that requires both engineering and cultural know-how. Willson mentioned the case of a cookstove developed with a new alloy, which was experiencing several failures in the combustion chamber when used by Indian customers. Perplexed, they sent a team there to investigate. They discovered that many households were blessing the cookstove with a Pongal, a ceremony in which milk is boiled over to symbolize the hope for abundance. However, the stoves are best broken in by running them hot for about an hour to create a needed oxide layer on the alloy. The milk was interfering with that, so the engineering team ended up using a different alloy to accommodate the ceremony without impacting stoves.

“We had done very, very rigorous testing, but we hadn’t thought of the milk,” Willson said.

On World Day of Social Justice, the Role For Business By Andrew Eder

Your Coffee, Their Lives, Our Planet By Yasmina Zaidman