Editor’s note: x-runner, Peru’s first certified B Corp, provides in-home sanitation in the slums of Lima by combining portable, dry toilets and a weekly pick-up system. The company was originally formed in 2010 to operate in India, but was re-launched by founders Jessica Altenburger and Isabel Medem in Lima in 2012. NextBillion first wrote about x-runner in 2015; here, Medem discusses the firm’s progress since then and some of the challenges facing sanitation worldwide.

Kyle Poplin: Is it fair to say the world is having a sanitation crisis? If so, is it fixable … and how?

Isabel Medem: According to the United Nations Sustainable Development Goals, today around 2.4 billion people lack access to basic sanitation services, such as toilets or latrines. And more than 80 percent of wastewater resulting from human activities is discharged into rivers or seas without any pollution removal. So, in my opinion, it is fair to say that the world is in a sanitation crisis, both in terms of access to acceptable and dignified toilets for people and in terms of the pollution created by the lack of proper treatment. It is fixable, but not only by conventional methods. All actors involved in sanitation – municipalities, governments, scientists, inventors, entrepreneurs – must come together to test and then implement innovative solutions. 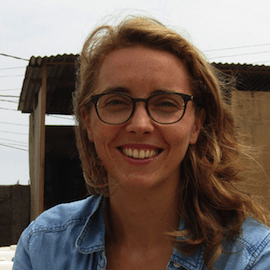 KP: What is x-runner’s mission? How has that evolved in the past couple of years? Has your target market changed?

IM: Our mission today is to be the number one alternative to conventional sewerage sanitation in Peru. Five years ago our mission more strongly expressed our goal to bring reliable, safe and affordable sanitation to the urban poor. While this still remains our core focus, we want to include our conviction that conventional sanitation solutions are not the future. Especially in countries like Peru, that suffer from water scarcity, but also given the fact that water will become a globally scarce resource, societies need to rethink and be open to using new methods of sanitation, such as our container-based system. So, by becoming a sanitation system that is equal or superior to the current sewerage systems, we want to reach even more urban poor families, and in a sustainable way.

KP: Roughly two years ago, x-runner customers paid $12 monthly for the service with a $30 one-time toilet installation fee. Is that still the going rate?

IM: The monthly fee remains US $12, but we have scrapped the installation fee for now. We offer communities with more than 50 percent customer households a 25 percent discount, and we will soon introduce a new, reduced installation fee.

KP: How many homes have you equipped so far? What are your short- and long-term goals?

IM: As of today, we have installed more than 750 dry toilets (manufactured by Separett), meaning that 4,000 individuals benefit from our sanitation system. It also means that 750 households place great value into our system because they regularly pay the monthly service fee of US $12, the majority of whom have been doing so for the past four years. Our short-term goals are to continue to expand into southern districts of Lima and increase the customer household density to more than 50 percent. Our long-term goals are to establish partnerships with municipalities to implement our system more broadly, at a lesser cost to the customers and in place of sewerage systems.

KP: How is x-runner doing on its pathway to sustainability? Have you reached economic break-even?

IM: As much as I believe in running organizations in a financially sound way (manage costs efficiently, earn revenues and cover your costs), I believe that the success of solutions for the global sanitation crisis cannot, and should not, be measured through economic breakeven only. The sanitation problem is too complex and involves so many actors, most notably governments, that solutions are far from simple. Which explains why in developed countries, all sewerage systems for sanitation are run publicly and subsidized. Having said that, at x-runner we currently cover around 23 percent of all our operational expenses, our long-term goal being to cover 80 percent.

KP: Do you have plans to grow and expand to other countries?

IM: We currently do not have plans to expand to other countries, but we are working on establishing partnerships with existing sanitation organisations in other countries.

KP: x-runner began as a small startup. What did you do correctly at the beginning and what did you do wrong? What advice would you give to others with a passion to start a social enterprise?

IM: What we got right from the beginning was to focus on our users and to establish a relationship based on trust and transparency with them. For the first two years, we designed and manufactured our dry toilet ourselves, which means that we spent hours and hours with our users, in their homes, talking and listening to them. We really developed the x-runner system together with our users. We also immediately charged for our service, this way establishing a relationship with our users that empowered them as customers with demands and complaints, and disciplined us to deliver on our promise of quality and service. We also understood the importance of building a strong and lasting team through strong leadership. What we could have done better was to begin to fundraise earlier in our pilot phase, and put a bit of a stronger focus on finding the right treatment process. Whoever wants to start a social enterprise should, in my opinion, think extremely big while being able to celebrate small achievements. They should also be strong team leaders.

KP: And, finally, a very tough question: What are the major holdups in the effort to achieve the Sustainable Development Goals?

IM: I think major holdups in the effort to achieve the SDGs revolve around role the governments in countries that have a strong sanitation problem play, and the lack of courage to try and implement new sanitation solutions. Access to sanitation is still seen as something connected to access to water, when, in fact, especially sanitation should move away from using water as a resource for its systems. So, the sanitation SDG faces the challenge to not only think of different and new solutions but, more importantly, to have the courage to implement them.

Kyle Poplin is a NextBillion contributor and a former editor.