Behavior change is often called the holy grail of global health promotion. Its appeal is clear: It’s much cheaper and easier to prevent diseases like HIV and diabetes than to treat them. Since simple changes in behavior can greatly lessen the risk of many of the world’s most debilitating illnesses and injuries, promoting these changes is rightly seen as a major global health priority.

Unfortunately, sustainable behavior change is vastly difficult to accomplish as an individual – New Year’s Resolutions, anyone? – and even harder to promote in the general public. Countless mass media campaigns have tried to promote healthy behavior in specific countries and contexts, but they’ve had inconsistent results. And when you add in the complexities of language and culture, seeking health behavior change on a global level can seem like a fool’s errand.

Kharas runs a social enterprise, Chocolate Moose Media, that produces for-profit television series and not-for-profit media campaigns – including nearly 2,400 animated behavior change videos in seven series. These animations are available free of charge, and have been shown in more than 150 countries and adapted into more than 90 languages, reaching more than a billion people. They address issues ranging from HIV/AIDS and malaria prevention to domestic violence and even the use of solar energy.

Kharas spoke at the recent Global Health & Innovation Conference, and he sat for an interview with NextBillion Health Care. (Videos of the interview and presentation – which includes clips from the campaigns mentioned – are posted below.)

“Animation is the easiest way to reach large numbers of viewers,” he says. “It’s perfect for mobile phones, and it can be interactive. You can have a variety of lengths and a variety of topics. It keeps the attention of the viewer and it’s easy for somebody to absorb the information. It overcomes educational limitations. It is easily translatable – so you don’t have lip sync problems. And you can create universal characters, as Disney and Pixar have shown throughout the years.” 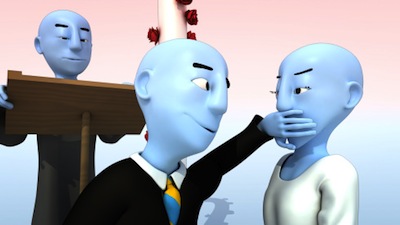 It’s this universality, he says, that makes animation ideal for global outreach. “Every human being has a multitude of barriers that separate and distinguish us – beliefs, culture, ethnicity, political background – all of these have to be taken into account when you’re creating a global communications program. In live action, you have a character, a real person – and the person will look like a certain ethnicity, and will wear certain clothes, and therefore it’ll be limited to the audience that accepts those clothes and ethnicities. But with an animated character – my latest campaign, which is to prevent domestic violence, contains blue animated characters. No real people are blue, and therefore it works around the world, because every ethnicity can recognize that those aren’t real people, therefore they’re more accepting of them.”

(Above: a screenshot from Kharas’ anti-domestic violence PSA series)

According to Kharas, it’s this sense of unreality that makes animation effective in addressing some of the touchier subjects in health behavior change. He mentions one of his best-known campaigns, the Three Amigo series of HIV prevention videos, in which the three friends are talking condoms. “If I had used real condoms,” he says, “I would never have gotten them on Iranian national television, where the Three Amigos was played.”

While many health promotion campaigns use fear to motivate change, Kharas employs a lighter touch. “I always use humor to bring the audience to the serious tagline at the end of the spot,” he says. “I don’t believe in coercing people into behavior change. Behavior change has to be adopted internally – the person viewing the spot must feel that they accept that change and will internalize it and follow the message. And we’ve tried out a number of different approaches, but ultimately, humor is what creates acceptance by the person whose behavior has to change.

“Let me give you an example: Almost all the campaigns on domestic violence that I’ve ever seen are coercive. They usually show a battered woman, and they essentially say, ‘Thou shalt not do this.’ I’m not sure that creates a lot of behavior change. First of all, it stigmatizes the woman even further. And secondly, it doesn’t address the abuser, it addresses the person who’s been abused. We really need to change the behavior of the abuser. So instead of bashing him on the head, I create humor as a means of communicating to him that he shouldn’t be doing that.” The reason the spots work, he says, is because the abuser is the butt of the joke.

Kharas says the anti-domestic violence campaign, like all his work, stems from his commitment to promoting human rights. Prior to his career in media, he worked on issues like disarmament, development, and refugees/immigration as executive director of the United Nations Association in Canada and in the Canadian government. “My belief is that you have a right to health, you have a right to be free from domestic violence, you have the right to an education, the right not to be taken into armed conflict. And these are some of the issues I’ve dealt with in creating these animated series.

“Human beings are rational people, and every person can be influenced and can change their behavior,” he adds. “Every person is reachable by communications, one way or the other.”

The Animated Activist: A Presentation by Firdaus Kharas at the 2013 Global Health & Innovation Conference

An Interview with Firdaus Kharas