Refining the Business Case for Off-Grid Energy in India: Illuminating the models with the greatest potential

The success of solar-based products and services to bring electrical energy to many at the base of the pyramid who lack access to even basic lighting has rightly received significant acclaim. Much of this stems from the role the private sector has played in developing new solutions such as solar portable lanterns, solar home systems, and solar mini-grids. However, despite strong projected growth rates, less than 5 percent of the market is penetrated; there is significant room for further accelerating the market with the right interventions.

For example, over 80 million households – roughly 50 percent of India’s rural population – have little or no access to grid-based electricity and the light that comes with it. Most of these households continue to rely instead on kerosene lamps, which provide only dim lighting, produce damaging carbon emissions, and can lead to chronic illnesses from indoor air pollution.

The challenge is in determining what solar models present real potential for scale. While there is significant private sector activity in off-grid energy solutions, it’s been difficult to unwind which models are actually sustainable and which are effectively relying on ongoing subsidies. There is a huge amount of interest in off-grid energy from philanthropists, donors, impact investors, and even mainstream investors, all proclaiming a private sector approach. But the aggregate of all these different forms of funding have shown that few models out there today are functioning without a subsidy of some form or another.

“The Business Case for Off-Grid Energy in India,” a new report by Dalberg (where the author is employed) on behalf of the Climate Group, highlights the business models with the greatest potential. Through a focus on these investable opportunities, the report makes recommendations for financiers and organizations looking to promote private sector investment in the off-grid space. Below are some of our findings:

Solar lanterns are a much-publicized corner of the market demonstrating commercial success, even though they are relatively new to the market. But to date, there haven’t been any real clear signs of successful models beyond solar lanterns in areas like solar home systems and mini grids. We see potential in a few to begin to serve the base-of-the-pyramid client segment profitably.

The solar home systems market is definitely going to grow – but it’s hard for businesses to distinguish themselves, given the ease of product procurement and assembly. The Chinese supplier market is also very competitive and that translates to the downstream players who are doing the assembling and distributing. Companies will need to move quickly as the technology evolves. This year’s solar products are going to be obsolete in a year in terms of relative performance, so companies that are rapidly bringing new products to market and creating a brand will win. In addition, solar home system companies that are able to bundle energy efficient appliances such as fans and TVs are providing real differentiation.

Within the very nascent mini-grid market, two models are likely to show strong commercial viability in the next three to five years. The first is small size mini-grids (micro-grids) that require lower upfront capital investment. The second is mini-grids that use an “anchor load” model. In an anchor load model, a mini-grid of significant size caters to both households and a commercial large load. This commercial load ensures stability of demand and revenues. Both these models have players that are now serving customer bases of over 25,000 customers.

Beyond sound standard business practices, investable models will have a forward-looking strategy to address evolving consumer needs, invest in product innovation to ensure relevance and differentiation, invest in payment technology to increase operational efficiency, and focus on partnerships to enhance sales, distribution and consumer financing needs. 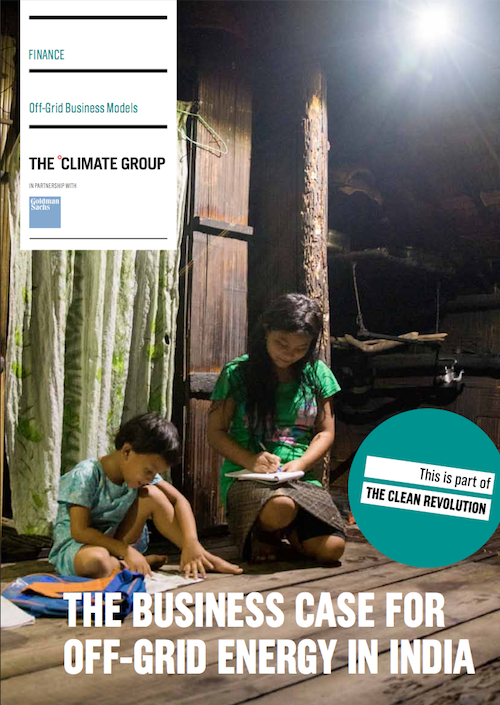 Though progress and implementation has been slow, India’s regulatory policy has evolved to support decentralized renewable energy models (and not just large solar and renewable energy power plants). Government initiatives have made greater funds for R&D and clean energy ventures available and created subsidy and loan refinancing mechanisms.

With India Prime Minister Narendra Modi’s new government coming into place, the government is trying to put its own stamp on the electrification issue. The Modi government has promised that every non-electrified household will have access to electricity, and has identified solar energy as the way to bring that about. The government has announced that it will add 100 GW of solar capacity by 2022, and expects $100 billion of investments in renewable energy over the next five years. This moment is important because the mechanics of how they do that policy-wise is still up for grabs.

We hope the research in our report can motivate the government to promote effective mechanisms and avoid things that don’t work. Some subsidies in the past have been market distorting and we hope the government notes this and uses the market more rather than pursuing a purely subsidy-focused path.