The Curious Case of Myanmar: Can the Country Leapfrog to Digital Financial Inclusion?

It may be hard to believe that these characteristics describe present-day Myanmar, a country that just five years ago faced economic stagnation. But as reforms have been brought into action, Myanmar’s fledgling journey of economic transformation has shown promise.

Arguably the most extraordinary transformation has been led by the nation’s telecom sector. Fueled by years of repressed demand, cheap Chinese phones, softening regulations and an aggressive push by the country’s mobile network operators, Myanmar leapfrogged from practically no phones to almost exclusively smartphones. Today, more than 75 percent of the population has phones, of which 80 percent are smartphones – a penetration level that is far higher than other economies in the region. 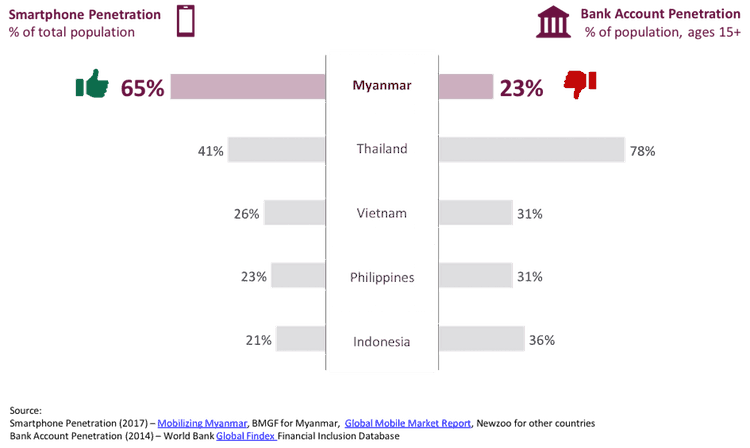 Accompanying the high smartphone penetration is the country’s near-obsession with social media, driven by the abundance of cheap data bundles. Viber, with 25 million active users, is Myanmar’s de-facto communication platform. Facebook, with 14 million active users, has become a core part of people’s identity.

However, the same leapfrogging phenomenon is yet to hit Myanmar’s financial services. Less than a quarter of the population has bank accounts. Only two ATMs exist per 100,000 adults, with hardly any outside large urban centers. Fewer than two percent of transactions occur digitally.

Looking at this stark contrast, a natural question arises – can Myanmar leapfrog from financial exclusion to “digital” financial inclusion, just as it did in telecom?

There is hope for a digital financial revolution, yet challenges lie ahead

The introduction of favorable regulations – most notably the issuance of mobile money licenses to non-bank entities – signals that Myanmar is already realizing the potential of digital financial services (DFS). Wave Money (a Telenor-Yoma Bank joint venture), the first benefactor of this licensing scheme, went live at the end of 2016. It has already grown to 500,000 users – equal to 5 percent of the population with bank accounts in the country – and 7,000 agents. Given this initial success and the potential market size, more mobile network operators and banks are looking to follow suit.

Myanmar’s sizable internal remittance market also gives cause for optimism. People in Myanmar often migrate from rural to urban centers, and subsequently need a way to transfer money back home. This need is currently met through Myanmar’s informal hundis, which transfer cash via a network of trusted agents. In the traditional hundi system, the sender pays cash to a trusted agent in his local region. The agent then contacts another agent situated close to the recipient’s location and cash is delivered, often on the same day. Hundis are simple, flexible, and convenient – no need for a bank account, no upper limits on transfers, and money delivered right to the doorstep. However, DFS can offer these same attractions, while also being instantaneous, cheaper, and more secure.

While these tailwinds are promising, several barriers still exist. On the supply-side, scalability challenges need to be resolved. As we see in other emerging markets, last mile distribution costs are high, liquidity at point-of-sale is hard to get right, and availability of skilled agents is a challenge. Exacerbating the operational hurdles is the lack of a robust ID infrastructure. Electronic IDs are nascent (though a recent smart ID pilot conducted in two states is promising) and the country has a long and troubled history with paper IDs, making customer authentication challenging.

Moreover, the customer pull to use DFS is unclear. People are emotionally attached to using cash and hundis, with a general mistrust of large banks due to a legacy of historical shocks, such as the 1987 demonetization – during which two-thirds of the currency in circulation was declared illegal with no option to exchange existing bills for new ones, and the 2003 banking crisis.

Making Leapfrogging to DFS a reality

Successful financial inclusion in Myanmar requires concerted effort across five building blocks – empowered consumers, relevant products, robust business models, supportive regulation and a shared infrastructure. With the relaxation of regulations to promote mobile money, and the push toward creating a digital ID infrastructure, progress can already be seen across the last two of these blocks. 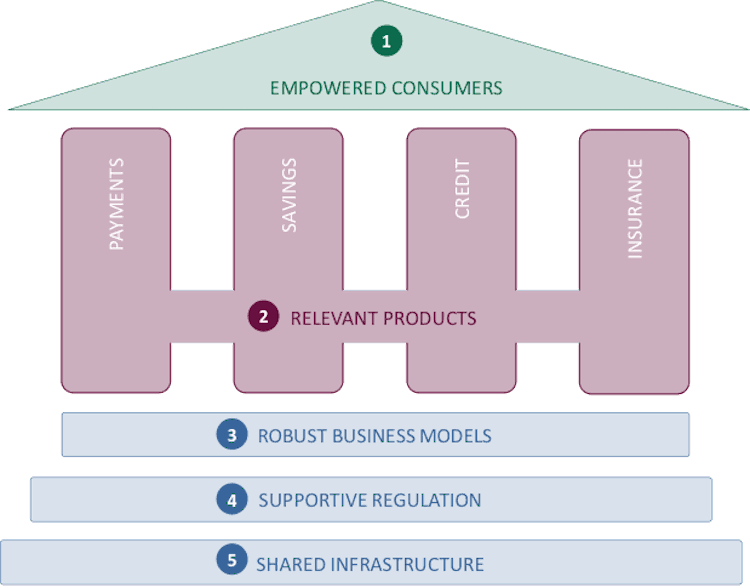 To empower consumers and develop products that work for them, emphasis should be placed on fundamentally understanding customer behaviors and attitudes. During our recent field research, we learned that, unlike in other markets, people in Myanmar do not tend to keep their old phone numbers or social media accounts when purchasing a new phone. Instead, at the time of a new phone purchase, the mobile shop-owners typically create new Facebook accounts (which are far more prevalent than emails) for consumers and download all necessary apps. Such insights could inform the design of financial products that cater to Myanmar’s unique context.

To develop business models that create economic value, while addressing the constraints above, DFS providers need to think creatively. One idea could be to build a cadre of tiered agents, wherein full-service agents provide the most complex services, medium-service agents assist with simpler, but time-consuming tasks, such as opening bank accounts, and an army of lite-service agents provides only basic services such as remittances.

There is no denying that headwinds exist, but there is substantial momentum in the ecosystem for Myanmar to counteract them, and have an encore to the telecom leapfrogging performance. When it comes to digital financial inclusion, the curious case of Myanmar could well turn out to be a successful one.

Nipun Jasuja is an MBA student at the Wharton School and heads the content platform for Wharton FinTech. Jasuja interned with Dalberg in Asia in summer 2017 and was an engagement manager.