The Field Guide to Human-Centered Design: A new book from IDEO.org is a ‘crib sheet’ for better social innovation

At IDEO.org we use human-centered design to tackle the problems of poverty. From products to services to experiences to full-on systems, we rely on the 50-plus methods laid out in our new book, The Field Guide to Human-Centered Design, as our roadmap to routine innovation. By keeping the people we’re looking to serve at the very core of our process, and by soliciting their ideas and asking for their feedback along the way, we know we’re designing something that people want. And we believe that anyone can do the same.

In sitting down to produce the Field Guide, we had a chance not just to reflect on our process itself, but to refine how to best teach it to others. As a small design organization – just 40 of us in San Francisco – we know that one of our best routes to big impact is helping build a movement of human-centered problem solvers. So as we put the Field Guide together, we included the philosophy that underpins our work, weaving together those 50 design methods and from-the-field case studies to reveal how we conduct our research, why we prototype our ideas immediately, and what it means to implement a new-to-the-world idea in tough circumstances.

We’re constantly picking up new ways to learn from the people we’re designing for, how to better synthesize our ideas, and how to bring partners and collaborators along for the ride. But as we’ve moved through scores of design projects, there are a few key methods that ceaselessly produce results.

Think of this list as a kind of human-centered design crib sheet, the quickest way to bring the voices and desires of the people you’re designing for into your work and a guide to building your ideas right away and iterating your way to success. While our efforts have honed in on poverty, it doesn’t matter what kind of challenge you’re working on; human-centered design can help you generate tons of ideas, keep your community close, and ultimately arrive at a product, service, or experience that will be adopted and embraced.

In 2012, we worked with the World Bank’s Consultative Group to Assist the Poor (CGAP) and the bank Bancomer to identify opportunities for new and more accessible savings products serving low-income Mexicans. The team conducted a ton of interviews over the course of the project, each time trying to understand how people save their money. Again and again the team heard, “I don’t save money.” But after asking a few more questions they came to learn that low-income Mexicans may not think of it as savings in the way that a bank might, but they are certainly socking money away. The team learned that one man stashed extra money in the pockets of his shirts when he hung them in the closet. Another woman gave money to her grandmother because she knew that she wouldn’t let her spend it on something frivolous. The team even talked to one man who saved his money in bricks. He was “saving” to build a house so he put his extra money in building supplies and then, after a few years, constructed the house. A key insight that came out of these interviews was that low-income Mexicans don’t save for saving’s sake, they save for particular things. This idea led directly to the team designing a project-based approach to savings, aptly dubbed Mis Proyectos.

An IDEO.org team was working in Senegal with the Rockefeller Foundation to understand how and why farmers’ food spoils before it gets to market. As we talked to more and more farmers about their food spoilage problems, there came a point where we had trouble understanding just how much of their crop goes to waste.

So we put a mound of, say, 75 beans in a pile and asked the farmer to group them into smaller stacks to represent how much of the harvest is consumed by his family, how much is sold, and how much spoils. Though we got a great visualization of what percentage of crops spoil, we also learned that there was one category that we didn’t even know about: crops that go to the neighbors. Not only did this give us an additional data point, but also made us realize that there’s an informal sharing system amongst farmers in many Senegalese villages. This prompted all kinds of additional questions about how communities band together and what post-harvest crop loss might mean at a community level as well as an individual one.

Generate Lots of Ideas, Keep the Good Ones, Toss the Bad

While designing the service that would ultimately become the Nairobi water business SmartLife, an IDEO.org design team came up with lots of ideas as to how it might work. But not until it bundled them, tossing out a few, and determined which played nice together, was it able to arrive at a robust solution.

Over the course of its research and synthesis, the team had a bunch of ideas. They heard that a catalog of products might make sense. They toyed around with a retail outlet, a subscription service, and a brand that revolved around aspirational health. Though each of these was a fine idea alone, the true promise of SmartLife wasn’t obvious until the design team started bundling them. By combining the subscription service idea with a retail space with an aspirational health brand, the team solved how people could both get cumbersome cans of water delivered to their homes while still having a reason to come shop for products at a branded kiosk.

A project team working in Ethiopia on designing a new device to plant teff put our process to the test when a prototype of their planter came face to face with the Ethiopian soil.

Transporting the planter from San Francisco to rural Ethiopia was one thing, but the real challenge came when engineer and team member Ravi Prakash set out to push it through a field of muddy soil. “Suddenly, Ravi’s steps started getting smaller. Watching him was like seeing time slow down,” reported project lead Martin Schnitzer. “Barely 50 feet down the field and the wheels had picked up enough mud to make it nearly impossible to move any farther. We knew the mud would be challenging but we didn’t think it would render the planter useless so quickly. Deflated, we felt like we were thrown back to the beginning of our challenge.” 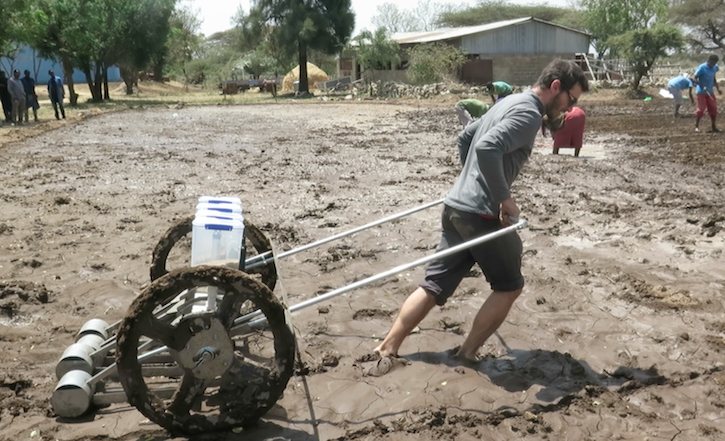 The team was quickly back in the shop of a local agricultural research center trying to figure out what to do with the planter’s wheels. They played with a variety of solutions, quickly moving through ideas like spiked wheels and skids, until one of the local metal workers had a suggestion: Wrap the wheels in burlap.

“Wrapping the wheels in burlap isn’t an idea we could have ever come up with in a brainstorm,” said Schnitzer, ”and burlap certainly isn’t on any list of new high-tech materials. However, using burlap came from keeping an open mind to trying new solutions. It came from talking to people who understand the conditions best and by sharing the excitement of this project with others to gain inspiration from a number of places.”

To learn more about human-centered design, and to get your own copy of the Field Guide, visit www.designkit.org