The Next Million: Grameen Shakti – an innovative model for rural energy business

When Thomas Edison demonstrated electric light in Menlo Park in 1879, American cities were already industrialized and ready to become major markets for electricity. At that time, Bangladesh was an undeveloped, agrarian society. A hundred years later, lights were burning in homes and factories in the entire United States and Bangladesh was still an undeveloped agrarian society; in 1995, only 9 percent of its rural households were connected to the grid. But in that same year a story began to unfold that would change life in hundreds of villages. A small group of people began experimenting how to bring solar electricity to rural Bangladesh and in 1996 started its first rural renewable energy service company – Grameen Shakti – which literally translates to rural energy.

Shakti found decentralized power supply best suited to rural households and made solar home systems the focus of its renewable energy business. The installation of a solar system’s panel, battery, and charge controller is essentially plug and play, and its basic maintenance is quickly mastered. The company installed 20 solar systems by the end of 1996, 2,800 systems after a decade of growth, and on Nov. 30, 2012 – 16 years after its launch – installed a total of 1 million solar systems in village homes, schools, clinics and businesses. What began as a small start-up now employs 11,500 technicians and engineers in 1,500 branches throughout Bangladesh. It plans to install its next one million solar systems by 2016, a bold plan.

“Really”? discerning readers will ask. In one of the poorest countries on the planet? And if this market is so promising, why did villagers have to wait until the 21st century to enjoy solar electricity? In essence, because this market is tough. It’s tough because rural customers are hard to reach, live in scattered villages where there are more mud paths than roads; business in rural Bangladesh is tough because of the high risks involved in a flood-prone country where houses are washed away, customers suffer from crop failure, get sick and are often unable to pay. It’s tough because people are poor and need loans to become customers.

(Left: A vendor with a solar powered cart).

The fact that Shakti succeeds in such a tough business environment comes from experience and innovation. It has found a way to finance a million village customers with microcredit. The company is 100 percent rural, which means all 11,500 Shakti engineers and technicians live, work and are trained in the villages where they learn rural business from scratch, providing service to the villages they call home. It employs young and dedicated engineers because its 1,500 widely distributed branches need to be self-reliant in a decentralized organization. Each of Shakti’s branches provides full service – from installing and maintaining the systems to managing customer financing and training the customer. If there is a problem, Shakti is onsite to solve it – even in times of disaster.

Shakti used conventional technology to satisfy the unmet needs of an energy-poor population and wrapped it in an innovative business model. It enabled Shakti to test its assumptions that there is a huge demand for light and electricity and that village people will invest, despite their relative poverty. The company started small to begin operations quickly, learned from its mistakes, adapted and steadily improved. As a result, Shakti was able to break-even in four years, launch a production center, expand its business and reach scale by 2005. 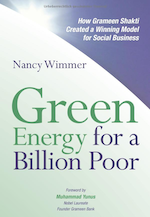 Shakti’s business model was ‘made in Bangladesh’ and reflects rural reality, where nothing is certain. It’s now a proven model with many components and many features, which must all integrate well to make the model viable. Shakti’s business relies on engineers who live and work in the villages, provide full service to their customers, train their staff, assess the market and open new business. Shakti is successful because all employees and all services are focused on its credo: rural business does well if the village does well. This is why Shakti sees to it that its customers save and earn with solar systems, and trains thousands of village technicians and freelance energy entrepreneurs to create jobs.

Shakti proved that business model innovation geared to a rural economy can succeed where business as usual cannot. No one can work miracles in traditional rural societies, but innovative business models can be applied and adapted for other developing countries. Exactly how Shakti’s model works is described in detail in Green Energy for a Billion Poor for this reason. Above all, readers will learn why rural business takes time and experimentation to develop. “I never failed once,” remarked Edison. “It just happened to be a 2,000-step process.” That holds for Shakti as well.

Nancy Wimmer is the author of the book, Green Energy for a Billion Poor – How Shakti Created a Winning Model for Social Business. It is published in both English and in German, Innovation & Energie für Millionen Dörfer – Grameen Shakti – Erfolgsmodell für Social Business.