The Protein Bottleneck: Are Insects the Solution to the High Cost of Livestock Feeds?

Editor’s note: Throughout 2017, NextBillion is organizing content around a monthly theme, dedicating special attention to a specific sector alongside our broader coverage. This post is part of our focus on agriculture for the month of September.

Researchers argue that using food sources like fish and soybeans for purposes besides human consumption threatens food security and is unsustainable. Yet, according to a Food Agriculture Organization (FAO) study on the state of world fisheries and aquaculture, 16.3 million tonnes of fish produced were used to make fish oil and fishmeal feed for animals in 2012.

To address this growing problem, Kenya’s International Centre of Insect Physiology and Ecology (ICIPE) and Uganda’s Makerere University (MU) researchers have identified the Black Soldier Fly (BSF) larvae as a more nutritious option and apt substitute for conventional protein foods that make livestock feeds. The larva has more crude protein content than conventional fish and soybeans, which have 45 percent protein, according to a report by the International Development Research Centre (IDRC).

In Eastern Africa, Kenya and Uganda are pioneering the development of low-cost and nutritious insect-based poultry and fish feeds after a study into their viability yielded promising results. Led by researchers from ICIPE and MU, the study has identified the BSF as an insect whose larvae can be commercially processed to provide proteins and mineral ingredients required in poultry and fish feeds. 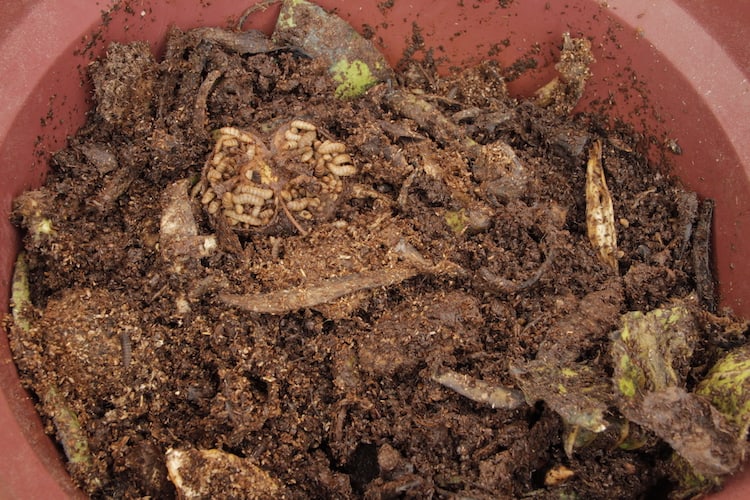 In both countries, the scarcity of protein ingredients contributes to the high cost of livestock feeds, and as a result feeds account for 60 to 70 percent of all rearing costs, according to an ICIPE report. Proteins that make livestock feeds have conventionally come from soybean and fish and are costly. The cost of a kilogram of protein-rich fishmeal in 2015 in Kenya was US $1.40 while in Uganda, where fish is more plentiful, it was US $.47. Still, it continues rising, causing the price of livestock feeds to increase as well.

Use of BSF larvae in the project, dubbed Insect Feed for Poultry and Fish (INSFEED), is projected to reduce the costs of proteins used in making livestock feed by 25 percent to 37.5 percent in the short term, and by 50 percent in the long term, according to the ICIPE/MU study.

“There is a high potential demand for insect-based feed because poultry and fish feed alone represents up to 70 percent of the feed sector in Kenya and in Uganda,” said Dorothy Nakimbugwe, an MU food scientist and one of the study’s researchers.

Field trial results on the efficacy of the BSF larvae as feed have been promising. Tilapia fed for 22 weeks with 33 percent of proteins from the BSF larvae weighed 23.4 percent more, compared with those fed strictly on conventional feed. Layer chickens age 31 to 52 weeks fed with up to 100 percent of BSF larvae proteins had 2.1 times higher average egg production in the last 10 weeks. They also had a longer egg-laying period above their economic usefulness than those fed conventional feed.

The study also shows rearing BSFs can create opportunities for income generation and jobs for youths and adults. In Kenya, the commercial poultry and fish sectors are annually worth US $133 million and US $56 million respectively, according to the study. The poultry sector in Kenya employs about 3 million people, according to the Kenya Institute for Public Policy Research and Analysis.

In Kenya, the annual volume of poultry mixed feed demand is estimated at 400,000 tonnes to 550,000 tonnes and rising. According to the study, Kenya has a potential annual demand of 115,000 tonnes of dried BSF-sourced protein for poultry feed. The BSF protein would have a market value of US $103.5 million to US $115 million annually and the potential for creating about 14,328 jobs for youths producing 2 tonnes of fresh BSFs monthly. Noticing such opportunities, tertiary institutions have initiated agribusiness incubation programs to train youths age 18 to 35 to take advantage of them. Kenya’s United States International University (USIU) has a new six-month incubation program dubbed the Metro Agrifood Living Lab (MALL). The program targets Kenyan youths with high school education who are engaged in the poultry and fisheries value chain.

Youths enrolled in MALL are taught agribusiness productivity, business counseling and connected to institutions like ICIPE to learn about innovative and beneficial technologies like INSFEED. MALL also ensures the youths get their agribusiness enterprises running by the time they finish the program. The 20 youths who pioneered the MALL program in 2015-16 have so far achieved a 90 percent success rate, and of those, 60 percent were women.

Their success in running their agribusiness ventures has caused them to attract financial institutions offering financing. Two MALL alumni have received from US $4,800 to US $9,630 to expand their poultry and fisheries ventures. A poultry keeper in Makueni County, Kenya, has also trained and contracted 75 other poultry keepers there to raise and supply her with chickens to meet the demands of her customers.

According to Karen Musikoyo, USIU’s agribusiness program manager, youths in the MALL program are also encouraged to collaborate and do business with each other in order to grow their enterprises. The ongoing, reciprocal business ties link those engaged in INSFEED as suppliers of BSF larvae protein feed to those who are rearing fish and poultry. This relationship and the emerging sector have the potential to reduce the tonnes of fish being used for making fishmeal and fish oil.

James Karuga is an award-winning freelance print and video journalist from Nairobi, Kenya.