Venture Capital is Broken – Here’s How to Fix It: A Q&A with Village Capital President Ross Baird

Venture capital investing, as currently practiced, is failing the majority of the world’s people. Need proof? Check out these stats:

More than half of all venture capital in the world goes to just three U.S. states: California, New York and Massachusetts.

Less than 5 percent of venture capital goes to women, and in Africa, 90 percent of startup investment goes to expats.

Out of over 150 “unicorn” companies across the world, only 15 percent are solving problems in food, health, energy, agriculture, financial services or housing – which happen to be the top six areas where the majority of the world’s population spends its budget.

In short, investors are often backing the wrong ideas for the wrong reasons, hoping to strike it rich by dumping billions of dollars into frivolous apps designed to benefit only a wealthy sliver of the world’s population. Meanwhile, innovative solutions to pressing global challenges that impact billions of people go underfunded. The results: rising income inequality, stifled entrepreneurial ambition, social distrust, and political uncertainty.

That’s the thesis of Village Capital president Ross Baird, which he expresses in compelling detail in his recent book “The Innovation Blind Spot: Why We Back the Wrong Ideas―and What to Do About It.” In it, Baird shows how deep-seated problems in our approach to financing innovation make all society’s other problems harder to solve – and explores ways we can change this dynamic. NextBillion editor Sonya Vann DeLoach discusses the book’s message with Baird in this email interview.

Sonya Vann DeLoach: Why is the current model for venture capital—for backing new ideas— bad for founders and investors, and what’s the alternative?

Ross Baird: In writing “The Innovation Blind Spot,” I learned that incredibly, the way we invest in companies hasn’t changed since the days of whaling 200 years ago. We designed the structure that venture capital funds use today to chase whales. The economics were simple: 20 whaling expeditions would leave New England, 19 would fail, but one would bring home the most valuable commodity in the world. Today, the average venture capitalist would say that if 19 of their companies fail, and one succeeds, they’ll be profitable.

We’re chasing the opportunities that seem the biggest, even if they’re not the best. Our capital is highly concentrated in the richest places and the most connected people in search of these ideas. More than half of all venture capital in the world goes to just three U.S. states: California, New York and Massachusetts. Less than 5 percent of venture capital goes to women. In Africa, 90 percent of startup investment goes to expats.

I also found that out of over 150 “unicorn” companies across the world, only 15 percent were solving problems in the top six areas that the majority of the world’s population spends its budget on: food, health, energy, agriculture, financial services, and housing.

Clearly, no one believes that any place or gender has cornered the market on good ideas, and we shouldn’t ignore our most important industries, but that’s where our money is flowing.

I’m encouraged by the people who are thinking differently – beyond just microfinance and venture capital –style equity. The Omidyar Network’s Frontier Capital movement is looking at ways to finance companies in the middle of debt and equity. The Lemelson Foundation, a partner of ours, is dedicated to supporting inventors and manufacturers – people who venture capital typically overlooks. Capria is training the next generation of fund managers, in places and industries where VC currently isn’t going. And the entire impact investing movement is full of innovators who are thinking through new fund structures and new types of capital. 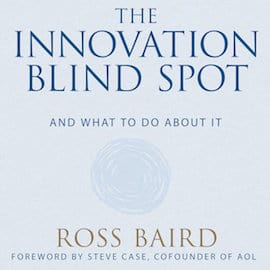 SV: How can the college athletic recruitment pipeline inform entrepreneurship?

RB: Jim Clifton, the CEO of Gallup, often comments that if you’re a world-class athlete, then wherever you live, you’ve got a path to success. Our society spends billions of dollars recruiting athletes each year — why can’t we do that for people who build businesses?

We like to pretend that entrepreneurship is a meritocracy. It’s not. On the other hand, college and professional athletics is more or less a pure meritocracy. We spend billions of dollars to make sure that the best high school and college athletes have their shot at the pros. Why don’t we do the same for entrepreneurs?

We don’t have effective mechanisms for finding the best entrepreneurs. One of the ideas I discuss in the book, and that came out of a “Moonshot” gathering we held with the Kauffman Foundation, is a $100 million-plus pipeline to source, support and invest in early-stage entrepreneurs around the world. If you have pro basketball talent and are born in Lagos or New Orleans, you’ve got a shot at playing in the NBA. We invest in companies, but very rarely invest in the pipeline.

SV: What did NASA teach Village Capital about evaluating technologies?

RB: We’ve developed a framework to help entrepreneurs and investors use the same language at the top of the funnel. We call it the VIRAL (Venture Investment-Readiness and Awareness Levels) Pathway, and it took its inspiration in part from NASA.

VIRAL helps entrepreneurs become self aware and articulate just how ready they are for investment. It allows investors to communicate the point at which they want to invest. We’ve found it a helpful lingua franca to kick off — and sustain — entrepreneur-investor conversations.

When the top of the funnel is clear and transparent, all entrepreneurs can get a fair shot, and investors are better able to find the best ideas.

In developing this framework, we took pointers from NASA, which experienced a similar problem in evaluating the level of maturity of technologies. (Steve Blank also developed a startup framework based on NASA’s model). The secret sauce is precision. NASA ranks the level of maturity of a technology from 1 to 9 to avoid confusion about the stage of the technology’s development: instead of saying “early-stage technology” or “late-stage” technology, they say “Level 3” or “Level 9”.

The VIRAL framework outlines nine levels that companies go through over the lifetime of the firm (what investor Tom Bird, a partner of ours, calls “laps in a relay race”.) It also identifies milestones across a range of categories: team, product, business model and others.

SV: What is your advice to investors when choosing which ideas are likely to be successful (and impactful)?

RB: The best way to predict which ideas will be successful is to have input from the people who are closest to the ground. When my colleagues at Gray Ghost Ventures, another impact investment firm, and I were starting Village Capital, we were inspired by the “village bank” idea in microfinance, where entrepreneurs in villages would help select who was ready for a loan. The core insight: founders on the ground often know better.

Village Capital now uses a peer selection model to make investments. We pre-commit capital, incredibly, to a group of founders and let them decide who gets investment.

Peer selection is not the only way to democratize investment. Some investors have portfolio companies weigh in on selection. Others make sure that customers are a part of the due diligence process. Still others pay close attention to the diversity of their investment committees. The bottom line is this: make sure that the people making decisions on the solutions and investments have lived experience with the problem.

SV: What is your advice to entrepreneurs seeking to attract impact investment without sacrificing their social missions?

RB: Capital is always more expensive than you think it is. Don’t apologize for your mission–in fact, lead with it! If you share upfront “this is our mission, and to be a part of this company, you have to agree”–I’ve found that you are more likely to attract the right investor than scare them off.

When I was raising money for Village Capital’s fund, I spoke upfront about our core mission of democratizing entrepreneurship and said “we have a peer review model. It is important and non-negotiable because it reflects our values.” I’d argue that 80 percent of people [I approached for] fundraising said no right away. (The good news: A 6-month relationship was over in five minutes, saving us both a lot of time!) The 30 people who ended up investing almost always said yes in the first two or three meetings, because they resonated with the mission.

You’re going to be tempted to apologize for your mission because you think it’s a weakness. I’d suggest you lead with it – it’s your biggest strength.

SV: What’s your response, as an investor, to the recent pushback from some voices in impact investing (like Mara Bolis of Oxfam) that the goal of achieving predefined financial returns has become too prevalent, and that the needs of investors too often take priority over the interests of social enterprises and the communities they serve?

RB: I’d agree, actually. Chris West, former CEO of the Shell Foundation and now running a group called Sumerian Partners, is is a mentor of mine who has also done good thinking on this. I think what I call “two-pocket thinking” in the book sets this up.

I once talked to a successful entrepreneur and philanthropist who had set up her own foundation to give money to educational causes. I was trying to convince her to invest in an education technology startup that had been improving student outcomes in low-income schools, and rapidly growing.

She looked perplexed. She said, “Ross, I have two pockets. In my business pocket, I make as much money as I can. When I have enough to provide for my family, I give generously from my philanthropy pocket. Which pocket are you asking about here?”

She helped illuminate a concept I’ve come to think of as “two-pocket thinking”: the idea that “what we do for a living” and “what we really care about” live in entirely separate spheres. We can move past two-pocket thinking and embrace what I call “one-pocket thinking”. Investors can realize there are impactful businesses that deserve their investment.

If we want a sustainable society, we actually need to merge these two pockets into one. Some capital will have returns below what you’d aim to have in BlackRock’s best performing fund, but have more intentional impact. We have massively restricted what our portfolios can do, and by squeezing out all options in the middle of two pockets, we’ve set our investments and our philanthropy up for failure.

Photo by rawpixel.com on Unsplash.