WAMDA: Inspiring, Empowering and Connecting Entrepreneurs in the MENA Region

Two years ago, long before anyone dared to think of revolutions sweeping the MENA region, I met a representative of a major U.S.-based impact investor at a conference in London. When I outlined the great potential for impact entrepreneurship in the Arab World, his interest remained limited. That wasn’t a surprise considering that in 2010 the MENA region was still largely a blank spot on the enterprise-for-development agenda. In contrast, today as we are witnessing youth in the MENA region turning from a generation in waiting to a generation of changemakers. With potential for increased innovation and entrepreneurship, the opportunities in the MENA region are discussed much more widely at social impact conferences around the globe, as evidenced by Ashoka Arab World’s Ashoka Innovation Network forum earlier this summer.

I had the chance to talk with Habib Haddad, a Middle East serial entrepreneur and CEO of Wamda (Arabic for “spark”) – a platform that already walks the talk and has been fostering entrepreneurship in the region for more than two years. Launched by Abraaj Capital at 2010 milestone event “Celebration of Entrepreneurship” in Dubai, Wamda has evolved to be a major entrepreneurship platform in the region. It nurtures entrepreneurship both online as well as offline by combining an information outlet, funding opportunities, and additional programs – each specifically catered to entrepreneurs in the MENA region.

“Wamda fills the gaps of the emerging ecosystem in MENA with a native e-platform to help impact entrepreneurs directly and indirectly,” Haddad explained. Through a 360 degree approach, Wamda aims to support both young and established entrepreneurs by addressing the lack of information on entrepreneurial opportunities as well as limited access to financing, mentoring and role models in MENA.

“With our media arm we provide much needed and previously unavailable research, equipping entrepreneurs with relevant information. Entrepreneurs also need the spotlight – they need to be promoted to get off the ground. With the media site we provide both, content to inspire and educate as well as a stage to spotlight entrepreneurs and their achievements,” Haddad said.

Another critical gap in the MENA entrepreneurship ecosystem has been the lack of capital for start-ups. Access to funding in the region is often cumbersome due to risk-averse investors and early-stage investments largely based on personal contacts rather than on formalized networks. “At Wamda we have an early-stage, industry-agnostic investment fund with which we invest across the Arab World. There is no angel investment scene and no matured venture capital scene, so it is a responsibility for us to play that role,” notes Haddad.

Indeed, the recently released MENA Venture Capital report, notes an increase 28 percent in venture capital activity in 2011. However, the majority of countries still have potential to grow and add vibrancy to their mostly nascent venture capital scene.

To increase entrepreneurs’ impact, Wamda runs a number of additional programs such as the Celebration of Entrepreneurship (CoE) event series. Following the 2010 event, CoE sessions have focused on the animation and e-commerce sectors, gathering entrepreneurs from across the region. As Haddad says: “We try to build a platform trying to intertwine and engage at all levels with entrepreneurs.”

Another program to facilitate access to key services and make entrepreneurs’ lives easier is WamdaCard. The idea of leveraging partnerships is at the core of Wamda’s overall (for-profit) business model. With a staff of only five people, the platform works with partners ranging from private equity firm Abraaj Capital to the American University of Cairo and social entrepreneurship promoter Ashoka Arab World. Additionally, WamdaCard builds on partnerships to help entrepreneurs access services and connect to service providers of all kinds. “WamdaCard will provide entrepreneurs with discounts for legal advice, office space, travel, even mentorship, etc. – anything to make their life easier.”

For an annual fee of around 100 to 200 USD to cover costs, MENA entrepreneurs will gain access to discounts with more than 50 companies including Sheraton Hotels, Google, and Aramex. 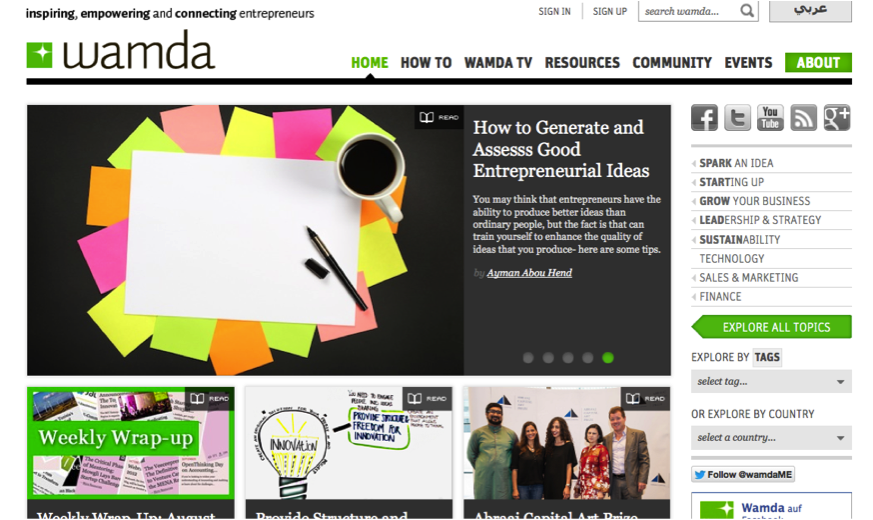 (Wamda is fully bilingual, serving entrepreneurs across the MENA region both in English as well as in Arab language).

According to Haddad, many more new start-ups have emerged after the Arab Spring. “Now the problem is that you need a support system for them – because if you don’t, it can backfire.”

Those starting a new business may not find an adequate support system, experiencing resulting in frustration and eventually giving up their entrepreneurial endeavor. That scenario would mean a missed opportunity for tapping the youth resource as potential drivers to economic and essentially human development in the Arab world.

A yet to be published report by OECD and the International Development Research Centre named New Entrepreneurs and High-Growth Enterprises in MENA shows that entrepreneurship, particularly high-growth businesses, have much potential. In the MENA region the number of such businesses is significantly lower than in other parts of the world. Eliminating unfair competition, implementing effective legislation for contracts as well as improving public services are steps on the way to enabling an increased number of such high-impact businesses. While policies throughout the region are adapting slowly, it’s worth keeping an eye out for initiatives such as Wamda that help shape the supportive ecosystem for entrepreneurs.