Editor’s Note: This post originally appeared in the April issue of Searchlight South Asia, a monthly newsletter created by Intellecap for The Rockefeller Foundation to report trends in urban poverty around the South Asia region. The project started in September 2009 as way to highlight on-the-ground urban issues and initiatives in Bangladesh, India and Pakistan. Through the research and content presented on education, water and sanitation, health, energy and infrastructure, the newsletter seeks to raise awareness and inspire ideas to action.

Rapid urbanization and industrialization in South Asia has complicated regional water and sanitation issues. Though statistics indicate that access to safe drinking water in cities has improved in recent years, millions of urban poor still face a daily struggle for this most vital resource. More worrisome is that the trend is likely to see a reversal if new, nimble solutions are not implemented with haste. The mounting obstacles range from access to affordability, not to mention a tangled web of local and state responsibilities. New solutions require pliability for the massive and complex urban context.

In Pakistan, waterborne diseases cause 40 percent of illnesses. Two hundred thousand children die in the country each year due to diarrheal diseases. These constant ailments prevent children from attending school regularly, cause mothers and fathers to miss work, and often amount to burdensome healthcare bills. While urban slum-dwellers are more likely to have access to a water tap than their rural counterparts, the water flow is often very unreliable and of questionable quality. A study by the Pakistan Medical Association (PMA) tested 600 water samples from a slum area in northern Karachi. The results revealed that “not a single sample was fit for human consumption.”

The degradation of water quality in Karachi is not exclusive to that city: water sources in South Asia’s cities are increasingly becoming dumping grounds for toxic waste and sewers for human excrement. Residents, however, have no choice but to consume the polluted water since the government will not connect slums to city piped systems, “thinking that the residents will claim land ownership on the basis of the monthly water supply bills,” according to an article in Pakistan Today. “‘Therefore we have no other option but to consume polluted water or buy water from tankers that is also unclean,’” said a slum resident quoted in the article.

In addition, outdated and mismanaged city infrastructure poses serious health threats and challenges. Open sewage drains run alongside water supply lines in Karachi and, as a result, tap water contamination is frequent. “Poor connections combined with deteriorating low-quality sewer pipes regularly result in leakage and mixing with the water table, contaminating ground water with everything from lead, cyanides, mercury, solvents, hydrocarbon compounds, and hospital and pharmaceutical industry waste,” according to an article on Acumen Fund’s site, which highlights an innovative approach to combating this issue. In India, the situation is similarly dire: the country’s capital city, Delhi, produces 3.6 billion tons of sewage every day, though less than half is effectively treated. The remaining untreated waste is dumped into the Yamuna River, which accounts for 86 percent of Delhi’s water supply.

“Higher demand for water, increased pollution by humans and industry and the mismanagement of water is most of all impacting the poorest people in the country’s towns and cities,” said Sushmita Sengupta of a Delhi-based think-tank, the Centre for Science and Environment (CSE), in a 2010 article entitled “Urban Poor Suffer Water Crisis as Cities Grow.”

Access alone is not the answer, as the Karachi example proves; solutions need to be holistic and sustainable, addressing the issue with a multi-faceted approach that combines purification, distribution, education and affordability. An increasing trend towards distributed models offers the opportunity to work more locally with communities, involving them in the solutions to ensure the projects meet their needs.

Although decentralized solutions to major water issues have focused more on rural areas, plans for large-scale city infrastructure around South Asia’s cities have surprisingly left residents with a dismal lack of services. A research paper that calls for the decentralization of the water sector in India says that this move will “facilitate participation and inter sectoral co-ordination, develop and operate water supply that is more responsive to the needs of the users and to engender a sense of ownership. To work, such decentralization needs to be gradual, as this requires more comparative studies of the conditions under which users are most likely to be organized and take part in participatory management.”

In 2006, Pakistan’s Ministry for Environment launched a large-scale national program, Clean Drinking Water for All (CDWA), which aimed to improve the quality of drinking water by building countrywide water treatment facilities. Despite the fanfare, the project, which had a budget of PKR7,871.74 million (~US$86.5 million), failed to meet its targets, resulting in an enormous waste of precious financial resources. As of 2011, only 1,139 of 6,584 planned filtration plants had been installed. One of the program’s major obstacles was the breakdown of communication and coordination among the myriad offices involved in providing technical assistance and in implementing the initiatives. Another issue is that the plants are expensive to maintain and, with a lack of ownership from provisional governments, the condition of the filtration systems is “worsening with each passing day,” said an official with the Ministry of Environment. With government initiatives such as these falling short, private sector models have emerged to fill the gap.

A New Solution in Lahore

Among the colorful storefronts of Lahore’s densely packed slum areas, new water shops have opened up that provide WHO-standard water to the neighborhoods at affordable rates. The water shops, a new social enterprise started by Pharmagen Health Limited (PHL), initially launched four water outlets in the city. Acumen Fund has taken an interest in PHL’s unique urban business model and, in September 2011, invested US$1.5 million in the company to help build 28 new plants. The funds will also help to significantly increase the capacity of existing water purification systems from 13,000 liters per hour (LPH) to 129,000LPH. The expansion and upgradations will allow PHL to produce a million liters per day, supplying half a million people, or 10 percent of Lahore’s population, with clean drinking water daily. 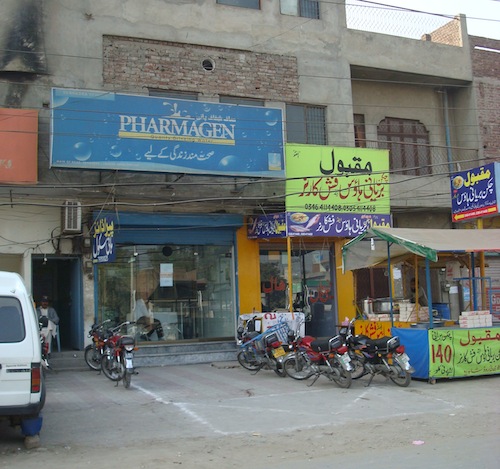 PHL’s water facilities use reverse-osmosis (RO) purification technology, giving the local community access to high-quality drinking water. The technology is popular among regional, rural clean water initiatives, such as WaterHealth International (also an Acumen investee) and Safe Water Network—both of which operate largely in peri-urban and rural spaces. Pharmagen has taken RO technology and the water shop innovation to Lahore’s dense neighborhoods. Costs have been reduced because of a decentralized model of production. The water outlets operate where customers can easily walk in to collect their water, costing them PKR1.5 (less than two cents) per liter. Reverse osmosis purified water in the market ranges from PKR3 to PKR7.50 per liter, making PHL water, according to Acumen’s website, the cheapest in Pakistan.

Other ways PHL’s decentralized model is more efficient is by eliminating the high costs of distribution and packaging. Customers come to the stores and bring their own container, which gets cleaned before filling. And more recently, customers even have the option of home delivery: for an extra

50 paisas more (half a cent per liter more), households can get a 19-gallon bottle delivered directly to their door via rickshaw. “Market research shows delivery sales are soaring,” says Acumen’s article on the new stores, “Housewives preferring the convenience and aspiration of receiving deliveries like in more affluent neighborhoods.”

Solutions to providing clean, affordable water are arguably more complicated than providing other basic infrastructure needs. In the South Asian region, water is attached to cultural, social and religious traditions, and because of these complicating factors, scalability can only be achieved with agility and a selection of approaches to meet diverse needs. Decentralized systems allow for more locally-focused answers, though major challenges with these models persist. Sustainability is one of the major factors in safe water initiatives, which was echoed by the ministry official of Pakistan in regards to the degradation of existing treatment plants. Financial models that can cover maintenance costs are necessary for ensuring that regular upkeep of the technology is incorporated in business planning.

Another challenge for water projects is the reduction in water quality at the point of consumption. PHL’s model is transporting water from the water shops to customers’ doors; yet, in order for the water to be of high standard both en route and during storage, PHL needs to introduce education programs that showcase proper storage and handling techniques. Forming partnerships with organizations such as Unilever, which launched a national handwashing initiative in Pakistan, could drastically reduce recontamination. Any water project that is to have lasting impact needs to approach the issue from a comprehensive perspective.

While private sector models are providing much-needed solutions to the growing water issue, the government needs to be continually and actively involved in the efforts. A July 2009 report warns that in the coming years, climate change could drastically weaken monsoon rains on the subcontinent, affecting the more than one billion people who rely on the rainy season for agriculture and water supplies. “The water demand (in India) will exceed supply by 40 percent by 2030 if it’s just a business-as-usual scenario and if the government does not spend adequately on infrastructure,” said Bharat Sharma of the International Water Management Institute. If governments around the region tap into the innovations happening on the ground, new partnerships can emerge with potential for wider impact. More state and local investment in infrastructure needs to happen simultaneous to private sector models. Only with this multi-layered commitment to solving the vast and complex water needs of cities around South Asia can the problem truly be solved for the long-term.