100 Million+ People Use Mobile Money Each Month: From P2P transfers to bill payments, here’s how they’re using it

Last month, we discussed mobile money adoption by users around the world and calculated that 103 million people globally were making transactions via mobile money on a monthly basis. In this blog post, I’ll take a closer look at what types of transactions people are making, and what people are using mobile money for. This year, for example, we have seen a large increase in the number of business and institutional users, indicating a growing mobile money ecosystem for digital payments of goods and services. Let’s delve a little deeper into the figures:

Today, these transactions don’t just represent individual users, but a wide range of companies and organisations that use mobile money as a channel for making and collecting payments for goods and services. Nearly a quarter (23.1 percent) of all the value processed through mobile money systems globally in December 2014 was for transactions involving these ecosystem players (including bulk salary payments and government disbursements), in addition to bill payments and merchant payments.

Which mobile money products are most popular?

Domestic person-to-person (P2P) transfers and airtime top-ups continue to dominate the global product mix in terms of volume and value. Not surprisingly, these two products are offered by the vast majority of mobile money providers:

While these products continued to see steady growth throughout 2014, other products are seeing greater traction among users, partly due to important innovations taking place in the mobile money industry. 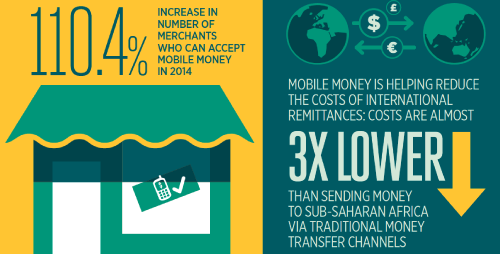 Mobile money remittances are expanding, both domestically and internationally, to allow users of different networks to transact with each other more directly.

Mobile money is supporting a growing ecosystem for payments

Active usage of bill payments is increasing, while merchant payments and bulk disbursements are driving growth of the mobile money ecosystem.

Editor’s note: This article was originally published on the GSMA Blog. It is republished with permission.

Alix Murphy is a Senior Mobile Analyst for WorldRemit.