In the past decade, climate technology startup accelerators have sprouted like mushrooms. Among the oldest is the Cleantech Open, which launched a decade ago in Silicon Valley and now operates programs across the United States and in other countries. On the other side of the Atlantic, Climate-KIC operates a climate change accelerator across Europe. The recently launched New Energy Nexus brings together a network of clean tech accelerators from across the globe.

In the mid-2000s, accelerator pioneers such as Y-Combinator and TechStars stumbled on a profitable business model for turning very early-stage startups into scale-up material without the public subsidies that typical incubators and technology commercialization offices have long relied on. Have you ever stayed at an Airbnb or shared files via Dropbox? You have Y-Combinator to thank. Eight of Y-Combinator’s companies have become billion-dollar unicorns. By 2015, there were more than 387 accelerators worldwide.

The goal of infoDev’s Climate Technology Program is to accelerate the growth of climate technology sectors in developing countries through startups and growing businesses. One question of high interest to our program is what support instruments will help those countries unleash the next Dropbox of clean energy or of climate-smart agriculture. And what role might accelerators play? To answer this question, let’s lay out the main features of accelerators and see how they hold up against the challenges we face in low- and middle-income countries.

The Global Accelerator Learning Initiative defines accelerators as “time-limited programs that work with cohorts or ‘classes’ of ventures to provide mentorship and training, with a special emphasis on connecting early-stage ventures with investment.” Accelerators select early-stage entrepreneurial teams as the raw material, the theory being that connecting these entrepreneurs to the right people and know-how, combined with intense pressure on the entrepreneurs, will make magic happen. It is not uncommon for entrepreneurs in accelerators to start off with one business model and pivot to a very different model by the end of the program. All of this happens very quickly. Typical accelerator programs last from three to six months. During that time, accelerators sometimes provide entrepreneurs with small amounts of financing for their basic needs (e.g. ramen noodles). They also take a very small equity stake in their startups. By the end of the program, they hope to capitalize on that equity by helping their entrepreneurs pitch to angels, venture capitalists and large corporations.

Now let’s look at some of the factors affecting the success of climate technology startups and growing businesses in low- and middle-income countries. For the purpose of this discussion, we can divide these factors into the three categories shown in the figure below: the business model, business assets and the entrepreneurial ecosystem. 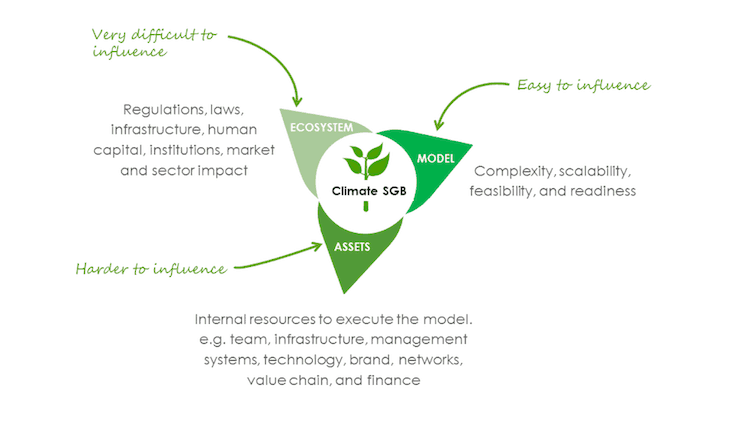 Accelerators focus on helping entrepreneurs discover and fine-tune their model. Of the three categories of factors, this is the one that accelerators influence the most. Accelerators were originally designed to work with digital startups in vibrant entrepreneurial ecosystems such as Silicon Valley and Boston. Within a three-month timespan, digital startups can rebuild multiple versions of a minimum viable product, iterate through competing business models and validate hypotheses with thousands of online customers and dozens of investors and potential business partners. Digital startups can do all this fueled mostly by ramen noodles and a bit of low-cost cloud software.

There is not much that climate technology startups in developing countries can do with three to six months and ramen noodles. Most of these businesses have hardware components, be it cookstoves, drip irrigation systems or biodigesters. That means that pivoting and validating new business models takes much longer and is much more expensive. While a pivot might require changing code in software, in the case of a hardware business this might require making expensive and time-consuming changes, physically taking new products to new customers, and if these are rural customers and the product category is something they have never seen before, going through the painfully long process of customer awareness building.

Most accelerators focus on strengthening only a very narrow range of business assets. Unlike private equity or venture capitalists, accelerators don’t own a dominant share of equity in their businesses and don’t have a say in their governance. That means they have limited influence on what a firm does with its assets, and these assets tend to reflect a lot of sunk costs and can be sticky. Accelerators can’t replace an ineffective CEO, and they can’t decide what technology a firm uses. They can loosely influence assets to the extent that they can help entrepreneurs get connected to new talent for their teams, build their business networks and find financing at their final demo day pitch session. Even if they had the power to influence assets, the short time span of accelerator cohorts might not give them the opportunity to do much about it. Even if they could switch out the CEO, finding top talent can take six months to a year. Similarly, a hardware firm’s brand or value chain can’t be built overnight.

The gaps in business assets of climate technology pioneers in low- and middle-income countries are significant. Starting with talent, as noted by a recent SSIR article by Harvey Koh, there is a mismatch between the people who have great ideas in the social enterprise world and the people who have the talent to take them to scale in social enterprise ecosystems. Talent tends to reside in the more mainstream commercial world. Accelerators have no leverage over teams and, when they admit them, they need to assume that the startup team members have both talent and ideas. However, climate tech startups with both talent and ideas are a rare breed in low- and middle-income countries.

Climate technology accelerators face further asset-related challenges. Let’s assume that we don’t believe the investors who tell us over and over again that climate technology startup talent is rare in developing countries, and that we find a talented startup that is ready to go through an accelerator program. In order to get to a point where it can pitch to investors with a chance of success, a startup would need to demonstrate that it has the potential to scale.

The problem is that while scaling is challenging for software entrepreneurs, the level of difficulty for hardware entrepreneurs is of a different order of magnitude. This is why even Silicon Valley venture capitalists tend to shy away from hardware businesses. Scaling hardware means developing reliable value chains that help you produce and distribute your products at the right price and quality. This is easier said than done. The founders of d.light, a global leader in off-grid solar lighting products, lived in China for several months before they were able to find the right suppliers.

Scaling will require not only networks and access to manufacturing capacity that most young entrepreneurs in countries such as Kenya or Jamaica do not have, but also value engineering and logistics know-how that is completely different from the types of skills required for prototyping and short production runs. And finally, scaling requires working capital. Suppliers will ask for some money upfront to process any orders, and because creating a viable hardware business requires economies of scale, you will need to start with orders of thousands of products and that will require a significant amount of working capital. Before you do any of that, you need to submit your hardware to certification processes, and probably apply for intellectual property protection, which would cost tens of thousands of dollars.

Value chains, the development of completely new skillsets, manufacturing capacity and working capital are not problems that accelerators are typically equipped to address, let alone within three to six months. This requires a different scale and intensity of support.

Accelerators typically don’t have the interest or capabilities to influence the ecosystem for the benefit of their startups. This is because accelerators were originally designed to operate in the supportive entrepreneurial ecosystems of high-tech clusters like Silicon Valley and Boston.

In developing countries, there is a multitude of ecosystem gaps to climate tech entrepreneurship that lies outside of the purview of what entrepreneurs alone can possibly tackle. No amount of helping an entrepreneur tweak the business model may help compensate for a culmination of factors such as poor infrastructure, weak IP enforcement capabilities, sectoral policies that favor incumbent technologies, a shortage of human capital and consumers with limited awareness of new product categories.

For example, take three of the countries in which infoDev works, Ethiopia, Malawi and Nigeria. A major bottleneck for climate technology sectors is the limited supply of foreign exchange that allows local firms to purchase technologies from abroad. This means that local enterprises won’t be able to import enough foreign technology to meet the economies of scale they need to become viable businesses. They can try to manufacture this technology locally, but the local manufacturing sector might not be able to deliver at the required level of reliability, quality and costs.

In those same countries, firms that launch major marketing campaigns for a new product category (say clean cookstoves) run the risk of seeing free-riding competitors leverage their effort to sell copycat or counterfeit products. And again, in those same countries, who would the climate tech companies coming out of their accelerator programs pitch to? There are no early-stage investors or angel investors. The rare investors are busy investing in something with resale value like real estate or something with low capital requirements like the next Pokémon GO app.

So, are accelerators good for the next Pokémon GO app but perhaps not as well suited to strengthening the models, assets and ecosystems of climate technology ventures in developing countries? While some accelerators have shown remarkable success in helping entrepreneurs shape up their business models, gain new skills and raise funding over short time periods, they operate most effectively in contexts and sectors that do not reflect the reality of countries where infoDev does its climate works, such as Jamaica, Bangladesh and Kenya. The timespan of accelerators is much too short for any meaningful impact, their reach beyond the business model is of limited value to teams that do not have the core assets they need to succeed, and the absence of a supportive entrepreneurial ecosystem makes them at best an incomplete tool for building climate tech sectors.

This calls for infoDev to adopt a customized approach to address the models, assets and ecosystems of climate technology ventures. To help entrepreneurs strengthen their business models, infoDev’s Climate Innovation Centers have longer timelines than typical accelerators, sometimes up to two years. This allows hardware entrepreneurs to undertake product development, customer validation and generate bootstrapping revenue to fund their ideas. To help entrepreneurs strengthen their assets, infoDev is now deploying a line of early-stage seed funds, first in Kenya and soon in Ghana. To connect good talent to global sources of ideas, networks, knowledge and scaling capacity, infoDev has also deployed a business model diffusion program that facilitates deals between firms that have deployed promising business models in one country with promising talent in another. After a first pilot in South Africa, the program has kicked off its expansion to Kenya and Ethiopia. Finally, to help strengthen entrepreneurial ecosystems, infoDev’s partners, such as the Kenya Climate Innovation Center, work with governments to address regulatory barriers to green businesses. In Ethiopia, infoDev is partnering with a leading energy access foundation to launch a new type of organization called a “market accelerator,” which would tackle broad market barriers faced by climate technology ventures.