Women Deliver Conference 2013: Why it pays to invest in women

In the biggest conference this decade focusing on girls’ and women’s health and rights, Women Deliver brought together more than 4,500 leaders and advocates – representing more than 2,200 organizations and 149 countries – in Kuala Lumpur, Malaysia.

The delegates included every major leader in women’s health, and several power women across public and private sectors played central roles: Melinda Gates, Lakshmi Puri, acting head of UN Women; Maria Eitel, CEO of Nike Foundation and one of Fast Company’s “League of Extraordinary Women”; Helen Clarke, administrator of the UN Development Program; Reeta Roy, CEO of the Mastercard Foundation; and Kavita Ramdas, former CEO of Global Fund for Women, among innumerable others. Given the quality of delegates and speakers, the conference is a powerhouse of systemic thinking around why and how to address arguable one of largest humanitarian crises on earth: women’s health and rights.

Development research has consistently proven that women’s health and rights are not only inextricably linked with development outcomes, but are central to creating a transformative impact on the developing world. It’s been shown several times that women reinvest 90 percent of earnings back into their families and communities, as compared to men, who invest only 30-40 percent of their income on others. The World Bank calls investing in women “smart economics” because when we help a woman rise, she brings her community and nation along with her. What’s more, women produce 43 percent of the food in developing countries, but are less likely to own land and compared with men own smaller amounts of land when they do. When women have the same amount of land as men, they typically produce 10 percent more in crop yields. More information on the multiplier effects of investing in women can be found here.

The enormous power of investing in women and girls has been proven time and again. However, we see that in most of the developing world, pregnancy is still a death sentence – in 2010, we saw close to 800 maternal deaths every day, globally. What’s more, seeing that 215 million women globally have an unmet need for contraception (or would not become pregnant if they had access to contraception), these highly preventable deaths are nothing short of a gendered human rights violation. Maternal mortality is also linked to many other factors, including gender inequality, income, and girls’ education (see the World Bank report: Investing in Women’s Reproductive Health: Closing the Deadly Gap Between What We Know and What We Do).

Given the centrality of women’s health and rights in poverty alleviation, it’s surprising how few resources have thus far been mobilized in the social enterprise sector toward the empowerment of women and girls. In my view, the way forward is to critically think about two action areas:

1. The mass mobilization of funding toward sustainable and scalable ventures and projects that are creating an impact on women and girls, and

2. Thought and action around creating more impactful and scalable business models for women and girls (while looking to scale traditional development interventions that have been particularly successful.) 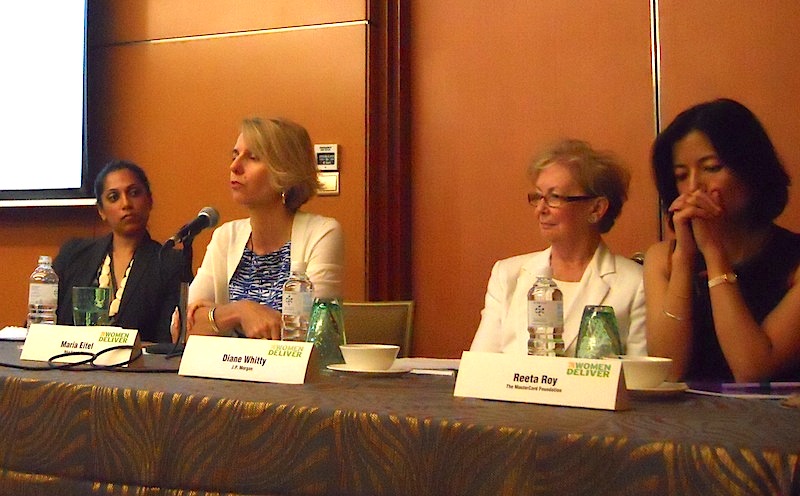 A few private sector foundations have paved a powerful path for mobilizing funds toward female empowerment. In a panel entitled “Investing in Women and Girls: How and Why Foundation and the Corporate Sector Make Investments in Support of Gender Equality,” Nike Foundation’s Eitel, Diane Whitty (Global Philanthropy, J.P. Morgan), and Reeta Roy, president and CEO of the Mastercard Foundation), took the stage to describe their strategies for unleashing capital toward the most impactful projects for girls and women.

Eitel said when she began to lead the Nike Foundation (with a team of two), she had free reign to focus on anything – from inner city gang violence to animal rights. She saw that poverty alleviation was the centerpiece problem, and then through extensive field work, realized that it was the adolescent girl who was the lynchpin to ending poverty. She made the economic case to Nike, which recognized the strength of the proposition and supported the endeavor. Soon, Eitel had succeeded in placing adolescent girls on the global agenda and mobilizing resources to impactful organizations. Every move the foundation makes, in true Nike form, is guided by a rigorous business plan – Eitel hopes their strategic action will allow them to impact 50 million adolescent girls by 2030. “The Girl Effect” is one platform that has allowed them to mobilize key stakeholders.

Many other private funds are also thoughtfully mobilizing resources toward women’s empowerment, including J.P. Morgan’s Philanthropy Centre and Mastercard Foundation. Roy said at The Mastercard Foundation, they are planning to spend $500 million over 10 years to help create 15,000 young leaders and invest in their dreams. What is one piece of advice for ventures looking for funding from foundations? Come together with like-minded organizations and put in a huge proposal together – that makes for a stronger case, Eitel replied.

While large foundations have started to channel capital, a few organizations are taking proven interventions to scale – this is much needed, since philanthropy alone will not solve the health, water, and sanitation crises around the world. For example, the World Health Organization estimates that if we relied on philanthropy alone, it would take an extra $18.4 billion per year until 2015 to reach the Millennium Development Goal of halving the number of people living without water and sanitation

That’s why innovative organizations are turning to a likely candidate for distribution: microfinance institutions. With their vast networks and deep relationships to borrowers – as well as their overwhelming impact on women (the fastest way to trickle down impact to the rest of the community) – partnering with MFIs is a savvy move. 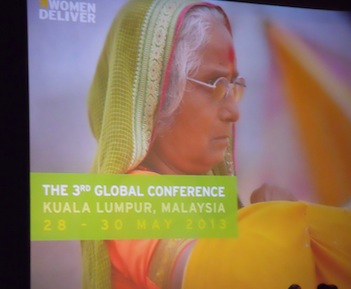 Janet Tinsley, of Water.org, described their Water Credit model, which gives MFIs “smart subsidies” to help them kickstart and scale financial products for water and sanitation products, including household water and sewage connections, toilets, and rainwater harvesting tanks. They have already impacted 600,000 people through MFIs such as Hand in Hand and Guardian in Tamil Nadu, India. (See more recent coverage on this issue here.)

In a similar vein, Freedom from Hunger is reaching more than 2 million borrowers at 25 MFIs in 10 countries with “microfinance health protection innovations:” – health education, health financing, links to health care providers, and access to health products – which are the four critical need areas in health care, as articulated by borrowers.

Another good case in point is Freedom from Hunger’s partnership with Gram-Utthan, an Indian MFI in the state of Odisha, which was discussed during the session Economic Empowerment and Health Protection: Can Microcredit be the Platform to Reach Millions? There, Freedom from Hunger provides health education to borrower groups twice a month, according to Eden Rock, program development advisor, India. The village health volunteers (trained by Gram-Utthan’s team of health professionals) make regular visits to client homes and earn 20 percent commission sales of generic medicines. Health self-help groups save until they accumulate about $9, when they deposit it into a local savings account. Any member who needs money for healthcare may access these funds, and 1 percent of the interest goes to the village health volunteers. The current running cost of this holistic program is around $1 per client per year.

Finally, Pro Mujer in Latin America is a model MFI in terms of healthcare delivery, having reached 1.6 million women with loan products. Dr. Gabriela Salvador, director of Health and Human Resources at ProMujer, explained to the conference that integral to their services is high-quality, low-cost primary health care, including screenings, mental health, dental care, vaccinations, and more, creating holistic solutions for the borrowers and their families.

Clearly, large foundations are starting to mobilize resources and build thoughtful business models to empower women and girls at scale, though much work remains to be done.

So where are these social enterprises? I met a few at the first-ever Social Enterprise Challenge at Women Deliver. Stay tuned for more about the winners.