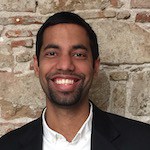 Arunjay Katakam is a former EY consultant who has co-founded three startups, exiting two— one of which eventually sold to Twitter. Today Arunjay is co-founder and CEO of a London-based cross-border remittance startup called Yooz and advises founders at DFS Lab. His extensive professional experience spans work in developing markets in Asia and Africa, as well as developed markets in the Global North.
Arunjay is the author of ‘The Power of Micro Money Transfers’ and truly believes payments will be free. He co-authored the GSMA’s 2013 and 2014 State of the Industry: mobile money reports and contributed to the 2015, 2017 and 2018 editions.